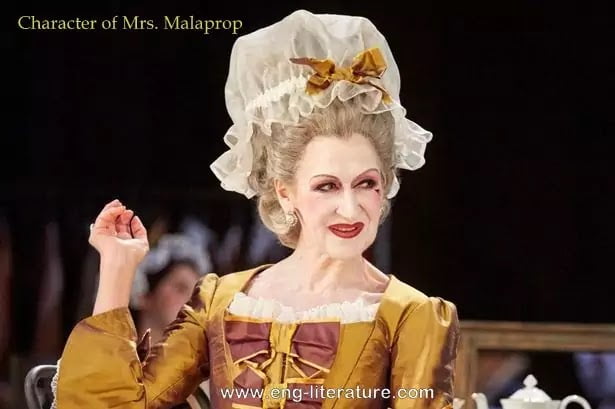 Mrs. Malaprop is one of the most famous and interesting character of the stage, who has won immortality. Sheridan has aptly named her “Malaprop” because of her silly misuse of words. This “queen of dictionary” is an ignorant, stupid widow. She is the aunt of Lydia Languish. She objects to Lydia’s love for a poor, penniless, beggarly young man called Ensign Beverley. She wants her niece to marry Sir Anthony’s Absolute’s wealthy son Captain Absolute.

Malaprop: Her stupid and fickle-minded of romance

Malaprop is angry with  Lydia’s love for Ensign Beverley, but she herself loves and wants to marry an Irish Baronet Sir Lucius O’ Trigger. She carries her love with him in the name of Delia. When Sir Lucius O’ Trigger comes to know that his lovely Delia is Mrs. Malaprop, he rejects her saying;

“Come, Mrs Malaprop, don’t be cast down-you are bloom yet.” Replying to him sharply she says, “Oh, Sir Antony-men are all barbarous.”

Malaprop: Her sense of self importance and vanity

Mrs. Malaprop‘s sense of self-importance and vanity finds other expressions also. It is said that Mrs. Malaprop is fifty already and she is still not tired of the choicest toilet and fashions in clothes, laces and frills. This unsuccessful attempt on her part to live up to the smartness of Bath is indeed very silly and diverting. This attempt at beautifying herself is to some extent excusable but to think a romantic love affair at this age when she has one foot in the grave is really ridiculous. She is romantic like a young girl of seventeen. She loves to dress up and make herself attractive and presentable to Sir Lucius, which is indeed ludicrous.

Malaprop: The contradiction in her character

Mrs. Malaprop is Lydia’s aunt and her guardian too. Fag is the one who introduces her to the readers by saying that there is an old tough aunt in the way of Lydia Beverley love affair. Later we hear Lydia talking about her as one who has been intercepting Beverley’s letters written to her. She commands Lydia with unquestioned authority to forget Beverley and accept Captain Absolute in turn. The contradiction in her character lies in the fact that on the one hand she disapproves the love relationship between Beverley and Lydia, while on the other hand she herself indulges in an affair with Sir Lucius, under a feigned name.

A prominent quality in her character is, her stupidity in whatever thing she does or says. This stupidity of hers comes out many times in the forms of unladylike coarseness of conduct. She feels proud in her baseness and she utters her meanness with utter shamelessness to Captain Absolute. The letter in which she was abused by Beverley, she foolishly hands it over to Captain Absolute to read and discuss. Even when Sir Anthony wishes her a husband and Sir Lucas tosses her around, she is rendered an utter simpleton in not at all understanding that she is being befooled.

It is really amusing to see that with all this coarseness of conduct, she professes the manners and dutifulness to her niece. She says to Lydia, “There is nothing on earth so easy as to forget, if a person chooses to set about it.” Further elaborating on the point, she says that when her husband died, she soon forgot him as completely as if he had never existed.

Malaprop: Her views on Education

Mrs. Malaprop and Sir Anthony debate on the question of educating women. Mrs. Malaprop opposes Sir Anthony’s view that girls should not be allowed to read at all. She admits that a girl need not be a “prodigy of learning” and that too much learning does not “become a young woman.” She however does not quite agree with Sir Anthony and has her own theory of how a girl should be brought up.

Malaprop: Her strange preaching to Lydia

We have already talked of the contradiction in her character. She comes out as a lady who does not practice what she preaches. She keeps preaching to Lydia to do this and not to do that. On various occasions she tells Lydia that thought does not become a young woman: “I do not know any business you have to think at all.”

The meaning of the word “Malapropism,” points out the main characteristic of her. Her name consists of the French ‘Mal’, ‘a’, and ‘propos’, which means out of place indicating her inappropriate use of words. She very often is seen to use high sounding, bombastic words, without understanding the meaning for wrong context in which she uses them, and this is what amuses us most about Mrs. Malaprop. She feels proud of what she calls her “nice derangement of epitaph” (“her nice arrangement of epithets”.) She indulges in malapropism in the course of the play, as she confuses words that sound similar but have different meanings. For example she uses the word “illiterate” when she means “obliterate”; “extirpate” for “extricate”; “laconically” for “ironically”; “progeny” for prodigy and several other such examples. Sheridan satirizes this lady’s tendency to misuse words in her endeavour to impress her listeners, with her command of the vocabulary. Sheridan becomes quite successful in his description of her.

In fact, it is because of this misuse of words that Mrs. Malaprop has become so well-known a character in the history of English drama. Sir Lucius rightly comments on reading her love letter written to him

“Here are a great many words pressed into the service of this note that would get their habeas corpus from any court in Christendom.” Captain Absolute in his turn refers to her “dull chat with hard words which she does not understand”. According to Julia, “her select words are so ingeniously misapplied without being mispronounced.”

Mrs. Malaprop cuts a sorry figure at the end

She is a typical chaperon of a comic play, who jealously guards her ward, although in her exercise she is neither as cruel nor strong as Sir Anthony. Even when Lydia rebels against her she can at the most ask her to get out of the room. We realize that in spite of all her faults she is a good lady. She is neither malicious nor jealous or greedy of Lydia’s money. She is Lydia’s well-wisher, and so does not want her to marry a poor Ensign. Mrs. Malaprop can be called stupid, pretentious and over-bearing but she is in no way wicked. Although her conduct is farcical at times, but she is not a weather-beaten she-dragon.

Mrs. Malaprop is actually a pathetic character-Lydia disobeys her orders, Captain Absolute outwits her in the love-game. Her romance with Sir Lucius too comes to an unpleasant end. She cuts a sorry figure at the end because she is publicly humiliated and is made the butt of jokes.

The Rivals would definitely go bankrupt without Mrs. Malaprop. Her role is significant in terms of contributing humour to the play. Among the ‘Dramatis Personae’ of the play, she is the most interesting and memorable. She has been honoured by being given a place in the English dictionary, where she has formed a word after her name, i.e. Malapropism. Her depiction in the play is such that the meaning the word “Malapropism”. points out the main characteristic of her. Commenting upon this aspect of Mrs. Malaprop’s character, Robert Herring says;

“Sheridan perhaps overdid this trick of misusing word, and certainly Mrs. Malaprop has received to much attention because of it, but it may be noticed that many of her mistakes, such as her choice of the words, ‘locality’, ‘oracular’, and ‘malevolance’ result is a dramatic irony that is wholly amusing.”