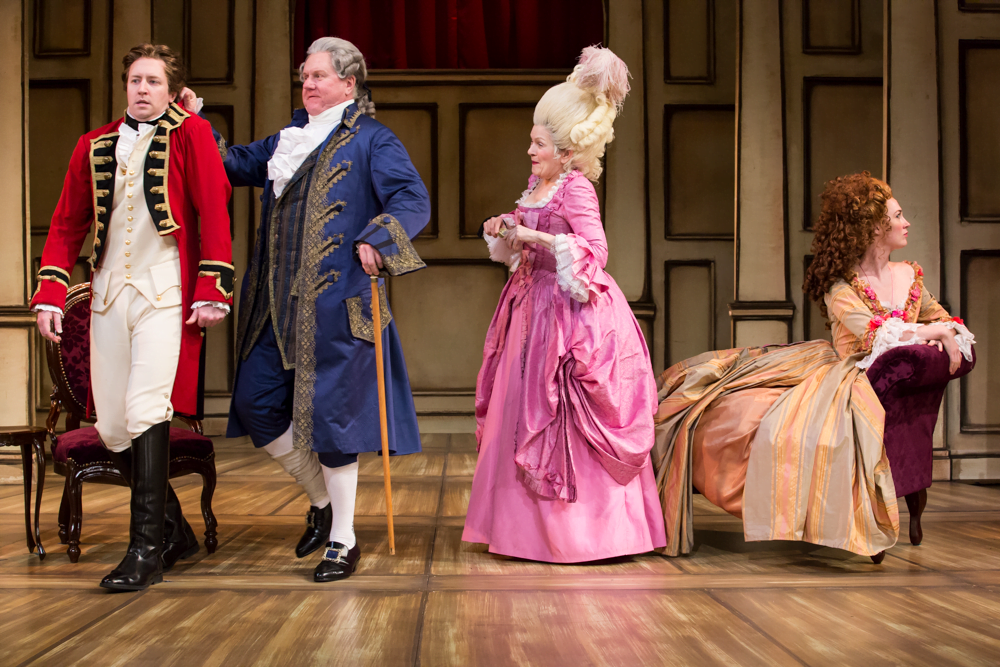 The Rivals as an artificial Comedy of Manners

The comedy of manners is a genre of play which satirizes the manners and affectations of a social class or of multiple classes, often represented by stereotypical stock characters. The Comedy of Manners had its origin in Ben Jonson’s Comedy of Humours. It was called the Comedy of Manners because it did not aim at presenting the human nature but the manners of the particular society. It depicted the manners of the contemporary aristocracy with their elegance, fashion and vices, pomp and show, polished behaviour, all sorts of intrigues, gallantry, cultivation of wit and brilliant conversation.

The Rivals certainly mirrors the manners of the contemporary Eighteenth century English society, particularly the fashionable upper class life of Bath. The life lived at Bath was a gay life of intrigues, gossips, scandals, flirtations and frivolity. Sheridan also makes us laugh at some of the contemporary fashions. When Bob Acres comes to Bath, he decides to discard his country clothes and to dress himself according to the fashion prevailing in the city. Then he tries to practice some French dancing steps and discovers to his disappointment that his are “true-born English legs” which can never learn French dancing steps. He is also fond of swearing and has developed a new way of swearing. We find him swearing, by “Gods’ balls and barrels”, by “God’s bullets and blades”, by “God’s levels and aims” and so on. Then there is a satirical treatment of dueling. The manner in which Sir Lucius instigates Acres to send a challenge to Beverley is most amusing. Sir Lucius gives the following argument absurdly in favour of Acre’s sending a challenge to Beverley:

“Can a man commit a more heinous offence against another than to fall in love with the same woman?”

The portrayal of Lydia is a satire on the romantic notions which young, fashionable girls of upper-class families of the time entertained. She is fond of reading romantic novels and stories. Fed on such stories, she does not want a conventional wedding. When Captain Absolute’s real identity is revealed to Lydia, she feels terribly disappointed at the collapse of her romantic dreams and hopes.

The portrayal of Lydia’s “tough old aunt”, Mrs. Malaprop is also satirical. We laugh at the contradiction in this elderly woman who puts restrictions on her niece, while herself falling in love with a tall Irish baronet and writing letters to him under the assumed name of Delia. Beverley’s description of Mrs. Malaprop as an “old weather-beaten, she-dragon” is most amusing.

The Julia-Faulkland love-affair is undoubtedly a parody of the sentimental comedy of the eighteenth century. Julia is portrayed as an excessively sentimental girl, while Faulkland is portrayed as the most whimsical and eccentric lover. Faulkland greatly amuses us by his account of the anxieties that fill his mind regarding Julia.

Another important feature of the Restoration comedies is witty dialogue. In The Rivals, the verbal skirmishes between Sir Anthony and his son is one example of the kind. The manner in which Captain Jack Absolute befools Mrs. Malaprop and Lydia is another example of wit.

Right from the beginning to the end, the play sends the audience into peals of laughter. As a specimen of Comedy of Manners, the true spirit of comedy, fun and frolic, humour and wit and even boisterous laughter reign supreme in this play.