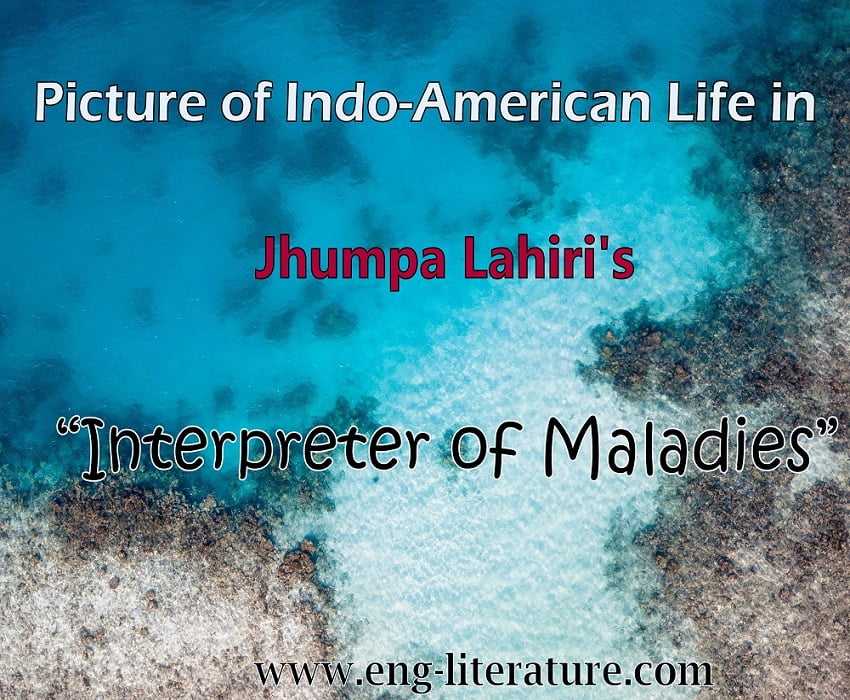 Jhumpa Lahiri’s Interpreter of Maladies is a short story about Indo-American family. She gives in the story ample glimpses at the life style as well as outlook on life of such a family. Her personal knowledge and experience have specifically enriched her account and given it both truth and depth. Both the exterior and the interior of the Das family are presented precisely yet graphically.

In the beginning the writer points out that the family was dressed as foreigner did. Mr. Das, a clean-shaven man, was dressed in shorts, sneakers, T-shirts. His wife, Mina wore a red-white chequered skirt that was just above her knees. Her hair, short enough, was a little longer than her husband’s. The children were too dressed like the European children. In fact, though Bengali in origin, the Das couple and the children were in the modern dress of the American.

More interesting is, however, their demeanor and the style of living. Here also the family is shown less Indian and more American. Of course there is a contrast in attitude between Mr. and Mrs. Das. Mr. Das was openly courteous as depicted in his greeting of Mr. Kapasi in their initial introduction. Mrs. Das was rather fashionably formal in her welcome to him, “smiling dutifully at Mr. Kapasi, without displaying any welcome to him.” The children, too appeared nowhere discourteous or rude though their remark about one another seemed not always fair.

There is yet another revelation about this American-Bengalee couple. And that is the truth underneath their ultra-modern dress and sophisticated formalism. Both Mr. and Mrs. Das seemed less seriously concerned about their siblings. Thus when Mrs. Das had to take the little daughter, Tina to the toilet, she looked extremely reluctant, and even “did not hold the little girl’s hand as they walked to the rest room.” Mr. Das was constantly busy with his camera and tour book. Just as Mrs. Das with her nail polish and puffed rice. In fact as observed by Mr. Kapasi, “they behaved like an older brother and sister, not parents.”  Mrs. Das became only excited during their tour to Udaygiri and Khandagiri, when Bobby was found missing, and was encircled by a troop of angry monkeys. Mr. Das only felt nervous and fumbled but did nothing to save him.

Mrs. Das also showed all through least interest in her husband, except to complain for not hiring an air-conditioned car. In fact she seemed to bear some grievances against him, and that was perhaps intensified by her unfortunate, unwanted, but not at all forced extra-marital affairs with the Punjabi friend. Though Mr. and Mrs. Das had long courtship and married life, the prolong course of time might have bred in them a sort of disgust and monotony.

Lahiri’s portrayal of the Das family underlines the spiritual and emotional hollowness of their Anglicized culture, drowned in the extremity of artificial formality. This is well borne out in the sad fate of Mr. Kapasi’s slip, containing his much carefully and cautiously written address as Mrs. Das had promised to send photo copy to Mr. kapasi. As she whipped out the hair brush, Kapasi’s slip fell out and “fluttered away in the wind.” Only Mr. Kapasi clearly glimpsed his slip and true nature of Mrs. Das.

Jhumpa Lahiri is found have well brought here the restive psychology of the Indians settled in the U.S.A., who are grappling with the baffling problems of the new world.