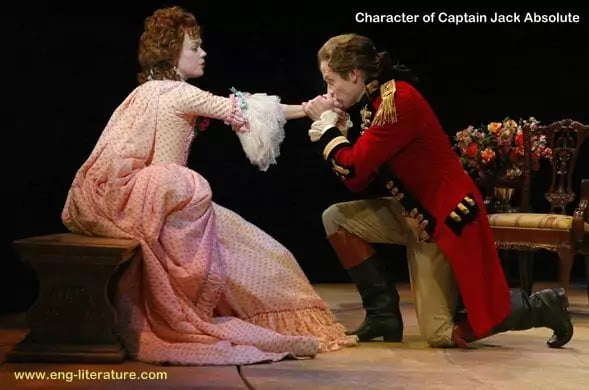 Captain Jack Absolute is the hero of the play, although he has one of the exceptionally heroic qualities. He is the son of the rich baronet (Sir Anthony) and a Captain in the army. He is the central character of the play and the plot is woven around him. Interestingly enough he is the only normal and balanced character in the play.

A masquerader for the sake of love

Sheridan has portrayed him as a romantic yet sensible lover; intriguing and fashionable; bold and manly like a captain, and witty, decent, and well behaved. As a gallant youth he has fallen head over ears in love with a beautiful lady, Lydia Languish, who as we know, is a sentimental fool. He is compelled by the peculiar temperament and inclinations of his sweet heart Lydia to pose that he is a poor Ensign of a humble origin. In the words of Fag, love made Jove masquerader, so love compels this young man to hide his real identity from his sweet heart.

Captain Absolute is the only balanced, practical and realistic character in the play. While Lydia is dying to elope with him and thus lose her marrying against her aunt’s wishes, the realist in Captain Absolute does not agree to it. He wants to keep both, the girl as well as his fortune.

His common sense in love is in clear contrast to Lydia’s and Faulkland’s sentimentality in love. While Lydia altogether loses head while in love, Faulkland prepares the bitter cup of jealousies and doubts for himself. Captain Absolute says to Faulkland, “Am not a lover and a romantic one too. Yet do I carry everywhere with me such a confounded farrago of doubts, fears, hopes, wishes…ete.”

He is careful to hide his true identity from his beloved. And, he throws dust into Lydia’s eyes by still pretending to be Ensign Beverley, and into Mrs. Malaprop’s eyes by letting her believe that Ensign Beverley is a different man and that the insulting letter which she had received had been written by that man. Thus he succeeds in befooling both aunt and niece. And, when the revelation comes, although he finds himself in a most embarrassing position, he faces the situation with a rare coolness and courage.

Captain Absolute shows a unique presence of mind whenever he is in trouble, or there is need for improvisation. He over-reaches both Mrs. Malaprop and Lydia, when to one he gives out as Captain Absolute and to the other as Beverley. In order to keep Lydia-in good humour he acts as the romantic lover admirably and says, “Bring no portion to me but they love ’twill be generous in you Lydia for well you know, it is the only dower your poor Beverley can repay.” Similarly, when he encounters his father on his way to the duel, he immediately muffles up his face, changes his voice and in order to escape his father, gives out his name as Saunderson.

Jack Absolute’s self confidence and composure

Captain Absolute has remarkable self-confidence and composure. He is seen to assure Sir Anthony that he is the son of Sir Anthony’s wife and that he really believes himself to be his son also. He flatters Mrs. Malaprop in a beautiful way saying that he is her most respectful admirer and that he will feel proud to call himself her affectionate nephew, by marrying her niece. To please Lydia, he says that he is her faithful Beverley who “knowing the singular generosity of her temper, assumed that name”.

Captain Absolute is portrayed as one having a sound judgment of everybody’s character. He understands his father in and out-that he is authoritative yet affectionate. Similarly, he thoroughly knows Mrs. Malaprop, whom he describes quite correctly though a little mischievously, in his letter to Lydia. He makes correct estimates of Faulkland and Acres too. He offers his sound criticism and suggestions to Faulkland to get rid of his suspicious nature but on Acres’ braggart nature he only laughs. The best judgment he has made in the play is with regard to Lydia’s character, because even while he is madly in love with her he does not take her as a monstrosity of virtues.

Though in this play with comical characters, he is the only one who seems perfectly normal, he is also the reservoir of good humour, which he spills on all occasions. He is not morbid like Faulkland and he is not absurd or ridiculous like Sir Lucius or Acres. He knows fully well the oddities of Acres and Faulkland and while he laughs at their cost, he is never malicious or revengeful. It is his cheerful, gay character, that has won him many friends and their confidence.

A captain in the King’s Army as he is, he is not without a soldier’s firmness and bravery. His strength of character is shown in the boldness with which he faces all the threats of his father. Even when he is disinherited, he decides not to give up the love-promises he has made. He is also bold enough to accept Sir Lucius’ challenge readily without even knowing the reason for it. And, when Sir Lucius continues to threaten him, he confidently draws his sword to face him.

Captain Absolute is himself aware of the contrast between him and Faulkland. He describes Faulkland as “the most teasing, captious, incorrigible lover”, and exhorts him to love “like a man”. Captain Absolute is seen to ridicule Faulkland’s skepticism and apprehensiveness as a lover. Sheridan has portrayed Faulkland as a whimsical kind of lover o act as a foil to Captain Absolute the protagonist, who as we have seen, is a practical man, one who grapples with realities.

We find Captain Absolute in a somewhat depressed state, only on two occasions. The first is when Lydia has broken off with him on discovering his true identity. The other occasion immediately follows this previous one. It is when Sir Lucius goes out of his way to pick up a quarrel with Captain Absolute.

Jack Absolute’s Relation With his father

Sheridan has portrayed the father-son relationship in such a manner that most of the interesting scenes in this play are those in which Captain Absolute confronts his father. Captain Absolute is anxious to please his father though heartily he is determined not to give up Lydia. He says point blank, “Sir, I must tell you plainly that my inclinations are fixed on another-my heart is engaged to an angel.” Sir Anthony is furious to hear this while Captain Absolute maintains his cool. He manages to over-reach his father most of the time. In his battle with words with him, he never lags behind.