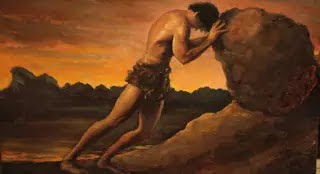 Philosophy of Absurd in The Myth of Sisyphus

An absurd drama is not professedly a problem plays. But since it represents a bleak picture of life, it gives rise to certain problems. Man is pitted against the relentless force of existence. The modern man can no longer share the buoyant optimism of Browning or the robust idealism of Shelley. The world to him is vale of tears. He is alienated from life, love and the universe. He is doomed to solitude. Even God has failed for him. He is in no-man’s land, but not crying for light, because he has no exhilarating experience of light. He is mad in a crazy world. He has no freedom of movement, freedom of thought, and freedom of expression. He is in a state of complete vacuum. He lives in an atmosphere of meaningless emptiness of nothingness. As Camus poetically describes it:

“It happens that the stage sets collapse.  Rising, streetcar, four hours in the office or the factory, meal, streetcar, four hours of work, meal, sleep, and Monday Tuesday Wednesday Thursday Friday and Saturday according to the same rhythm – this path is easily followed most of the time.  But one day the “why” arises and everything begins in that weariness tinged with amazement.”

We are faced with the real possibility that life is meaningless.  If this sense of meaninglessness persists, we are forced to ask whether life is worth living at all.  Camus says that this question of suicide is the most basic philosophical question.  He opens his essay with this fundamental point:

“There is but one truly serious philosophical problem, and that is suicide.  Judging whether life is or is not worth living amounts to answering the fundamental question of philosophy.  All the rest – whether or not the world has three dimensions, whether the mind has nine or twelve categories – comes afterwards. These are games; one must first answer [the questions of suicide].”

Therefore, a few basic propositions about the term “absurd” are:

Much of the beginning of the essay is spent framing up the existential condition which Camus calls the absurd.  Man is caught in a paradox.  On the one hand, all empirical evidence shows that the world is unpredictable and chaotic. Lives come into existence and pass.  Ideas are proven to be true then determined to be false.  One belief is held than another.  Even our own moods are constantly shifting.  On the other hand, man has a persistent nostalgia for unity, a need to make sense of the world.  This is the human condition, Camus suggests, a constant attempt to derive meaning from meaninglessness.  And it is absurd.

Given this situation Camus explores the possible responses.  First he examines a religious answer proposed by people like Soren Kierkegaard.  Camus argues that the religious leap of faith that Kierkegaard proposes is unnecessary.  This leap is an escape from the fact of life’s absurdity, a “philosophical suicide” as Camus puts it.  Next he looks at the opening question of the essay, what about suicide as a response to the absurd?  He concludes that this too is an unnecessary escape from the reality of life’s absurdity.  He points out that a life without meaning does not necessarily lead to the fact that life is not worth living:

“People have played on words and pretended to believe that refusing to grant a meaning to life necessarily leads to declaring that it is not worth living.  In truth, there is no necessary common measure between these two judgments.”

Camus’s response to this condition of the absurd is to “live in revolt.”  By this he means that we accept the tension of searching for meaning in a totally chaotic world.   We deny neither our hunger for unity nor the apparent disorder of the world.  The last part of the book is dedicated to examples from history and literature of people who have lived this life of revolt to varying degrees.

Camus took this very question into account when he said “[t]here is but one truly serious philosophical problem, and that is suicide. Judging whether life is or is not worth living amounts to answering the fundamental question of philosophy”. This issue must come before all else because, if one wishes to live one’s philosophy, this will dictate whether or not one should commit suicide. Camus looks around at people dying by their own, or others hands when he says “I see many people die because they judge that life is not worth living. I see others paradoxically getting killed for the ideas or illusions that give them a reason for living (what is called a reason for living is also an excellent reason for dying)”, and thus Camus begins a journey.

But counter to Schopenhauer’s view of suicide, Camus essentially said “fuck that”. For him, the answer is simple: “revolt”. Killing oneself is an act of weakness, of cowardice. A reaction to not being able to understand life. This revolt can take many forms, from the artist, to the hedonist, to the imperialist, it just requires an embrasure of the now. As much as it pains me to say this, rap artist Drake was on to something when he said “You only live once ‒ that’s the motto nigga YOLO” in his song The Motto.

Camus provides a perfect analogy for man to live by, the story of Sisyphus. According to Greek mythology, Sisyphus was a king who was constantly being deceitful towards the gods (who didn’t take kindly to that). The gods punished him by forcing him to push a boulder up a hill just to see it roll back. He was then forced to repeat the action for eternity.

Camus likens the human condition, that of mindless work, school, etc. to that of Sisyphus. We are like small ants running around doing mindless tasks for as long as our tenure in this universe allows. But for Camus, that is not enough. He says man should be like Sisyphus, to not just engage in these tasks, but to be joyful. To be happy. The absurd man stares this pointlessness in the face and laughs, for, as Camus concludes, “[t]he struggle itself toward the heights is enough to fill a man’s heart. One must imagine Sisyphus happy”.

In the end we are not completely compelled by Camus’s conclusions.  His assertion that a philosophical life is a constant struggle rang true, but I was unable to understand the historical and literary examples he used to illustrate this “life in revolt” (this is probably due to my unfamiliarity with the philosophers and literary characters he used as examples).  I did not see the horror in the “philosophical suicide” that he attributes to religious philosophers.  I have worn out plenty of philosophies on life and will probably continue to plow through many more.  I have seen that an intuition or experience can solve an existential dilemma as well as, or even better than, the clearest thinking.  Maybe I am not a true philosopher, but the reasons I could come up with for avoiding suicide would be centered round my relationships, certain moments of inspiration, and a very strong, clear sense from my body that I will protect it at all costs.