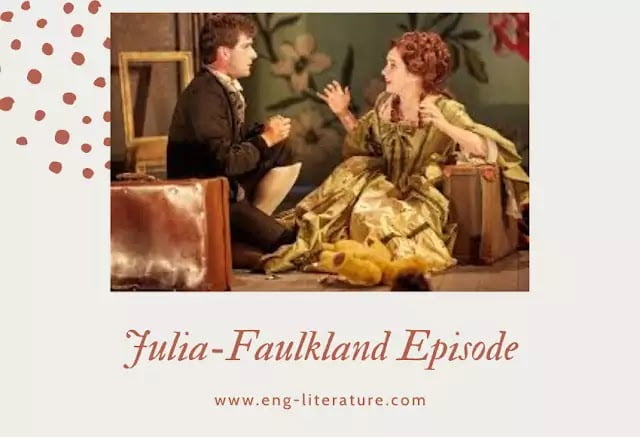 The dramatic work of Sheridan marks at once the height of the reaction against sentimental drama. The attack against sentimental excesses in the main plot is unambiguous and straightforward. But the Julia-Faulkland plot has elicited different responses. Therefore it is contended that Sheridan in this plot intends to appease the sentimentalists, and it expresses his compromise with sentiment. As Bevis has pointed out, “Faulkland, in particular, does appear to oscillate between capricious humorist and sentimentalist, depending on which scene or speech or text is under the lens?”. With wit and mild satire he ridicules certain prevailing social vices of the day and only to that extent can we take him to have any social purpose in this work. The Rivals was basically written as a pure and simple comedy, but there are certainly a few sentimental scenes in this play. And, these scenes occur between Faulkland and Julia. The right approach to these scenes could be to regard them not as sentimental in a serious sense but to regard them as a parody of sentimentality.

In The Rivals, love lives in many humorous forms. Cupid’s strange way is remarkably displayed in the love story of Julia and Faulkland in the play. Julia, the ward of Sir Anthony Absolute, is betrothed to Faulkland, who once saved her life. Their marriage is settled. But Faulkland, u thoroughly sentimental fool, is often haunted with a sense of uncertainty and suspicion. Very often a doubt about Julia‘s fidelity to him rules his mind, makes him woeful end wan, and turns him into a hopeless lover, Julia, however, is sober and tolerant enough to bear calmly the whimsicality of her lover. Faulkland tests her sincerity and faith every now and then in order to assure himself that she entirely belongs to him. At last Julia gets tired and feels sadly humiliated by her lover’s conduct. She sends off Faulkland with the words that as he seems to be an incorrigible lover, she will remain a maid all through her life.

A brief examination of these sentimental scenes would hence clearly reveal that Sheridan‘s real intention was to poke fun at the sentimental comedy of the time. We find both Faulkland and Julia talking in a manner which is manifestly absurd. Sheridan ridicules the sentimental husband’s jealousy for imaginary lovers of his mistress in the character of Faulkland. The true character of Faulkland is indicated to us by Absolute’s description of him as the most “teasing, captious, incorrigible lover”, who carries in his head “a confounded farrago of doubts, fears, hopes, wishes.”

When Faulkland is described in such a manner, the audience is bound to feel amused at the absurdity of Faulkland‘s sentimentality. Sheridan ridicules the excessive solicitude and concern which an over-sentimental lover like Faulkland experiences when separated from his sweetheart. Evidently, Sheridan‘s purpose is to remind us that, even where the passion of love is concerned, a man should exercise a certain degree of self-restraint and self-control, unlike Faulkland. By ridiculing Faulkland, Sheridan aims to instruct his readers that one should by no means give way to the flood of emotion in his heart.

The propriety of the Julia-Faulkland episode is questioned in many quarters. It is contended that this episode is a superficial addition, and has unhappily lengthened the play. As a matter of fact, the love-scenes between Julia and Faulkland seem rather drab and dull among the sparkling situations of the play. Moreover, the love-affair of Faulkland and Julia has had a little material link with the main plot of the play. The story of wooing and wedding of Captain Absolute and Lydia could have been easily managed without it. In that case the play would be much shorter, and the charge against its undue length could not arise at all

Nevertheless, the importance of this episode cannot be altogether left out. The love of Julia and Faulkland acts as a foil to that of Lydia and Absolute. In this respect, the former is complementary to the latter. Lydia offers a striking contrast to Julia, just as Faulkland does to Captain Absolute, The ‘singular taste’ of Lydia is better revealed when it is placed by the side of Julia‘s sober and considerate temperament.

Lastly, the episode is Sheridan‘s satire on the prevalent distemper of his ago. Through the scenes between Faulkland and Julia, surcharged with the clouds of sentiments, Sheridan seems to caricature the capricious and sentimental love of the youths of his time.