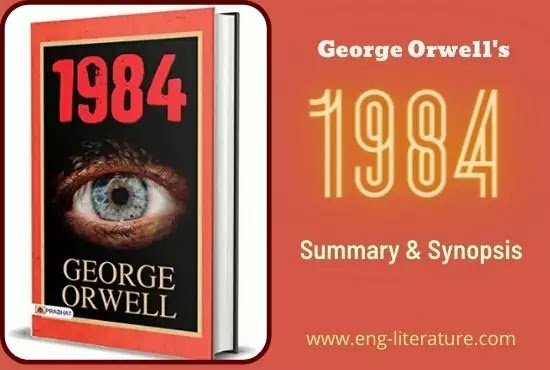 An average, intelligent man, a minor employee in the Ministry of Truth, Oceania’s propaganda mill.

A beautiful, rebellious young mechanic in the Fiction Department of the Ministry of Truth.

Ugly, highly intelligent, and a member of the Inner Party.

The old proprietor of a London junk shop field with charming relics of the past.

The all-seeing, all-powerful ruler of Oceania whose magnetic eyes stare out from every billboard.

The semi-mythical arch-enemy of Oceania.

At lunchtime on April 4, 1984, Winston Smith takes time off from his job at the Ministry of Truth to go home and begin a secret journal. He has a lovely old notebook bought at Mr. Charrington’s junk shop a few days before, a dangerous act in 1984, when secret thoughts and relics from the past are forbidden.

Winston Smith lives in London, now the principal city of Airstrip One, part of Oceania which comprises Britain and North and South America. Like the two other massive power blocs of the world, Eurasia and Eastasia, Oceania is a completely totalitarian police state, rigidly adhering to the principles of Ingsoc, or English Socialism.

The majority of the population are called Proles; they are considered too stupid to matter. To ensure the complete loyalty of its members, the Party has placed a two-way telescreen in every room. Winston, a minor white collar worker in the Outer Party, has a room so peculiarly shaped that he can hide in a corner from the ever-watchful tetescreen. And he hides as he opens his journal and several times writes the highly treasonous statement, “Down with Big Brother”. Big Brother, whose heavy, moustachied face glares down from every billboard, is the mysterious leader of Oceania in its endless wars with Eastasia and Eurasia. No one has ever seen him, but in the torture rooms and dungeons of the Ministry of Love, his power is made clear to anyone defying the State.

Returning to the Ministry of Truth, Winston settles down to his job, which consists of falsifying back numbers of the Times in order to keep them in line with present policy in Oceania. History is a plaything of the Party. Objective truth no longer exists. Winston is an expert at his job, but he loathes it and most of his zealous fellow workers who are compiling a new edition of the Dictionary of Newspeak, the official language of Oceania.

Winston’s dreary, soul-destroying work is briefly interrupted by the Two Minutes Hate session which all workers must attend. In a large hall they watch movies of Eurasian war atrocities. The climax is reached with the picture of Emmanuel Goldstein, the almost legendary enemy of the Party, an alleged counter-revolutionary and scapegoat for all the military, social, and economic failings of the Party. As the pictures appear on the screen, the audience works itself up into a frenzy. Anyone who fails to scream curses at the screen is immediately reported to the Thought Police and is afterward “vaporized”.

At the Two Minutes Hate session, Winston sees Julia, a lovely, cool, dark-haired girl who he thinks has been following him, probably because she is a member of the dreaded Thought Police. Dressed in regulation overalls (she repairs the machines that churn out cheap fiction for the Proles), with the banner of the Anti-Sex League draped around her, Julia secretly slips Winston a note reading “I love you.” Winston and Julia arrange a rendezvous in a secluded nook in the country, far from any telescreen.

Winston war married once: his wife was an ardent Party worker and member of the Anti-Sex League who looked on sex in the orthodox Party way, as a disagreeable duty to perform for the good of the State, When Winston failed to give her any children, she left him. The only love Winston ever knew was his mother’s and she had disappeared many years ago-probably to be Vaporized.

In the country, Julia and Winston becomes lovers and spend an idyllic afternoon exchanging confidences. Julia tells him is a member of the Anti-Sex League and a seemingly loyal Party worker only for security reasons. Actually she is promiscuous, loves life, and despises the Party. Like Winston, she is fond of exploring the black markets run by the Proles, where Party members are never supposed to venture. There she can sometimes get real coffee and chocolate instead of the synthetic “Victory” substitutes that Outer Party members are supposed to consume.

Winston is fascinated by Mr. Charrington’s junk shop. He returns there again and again, searching for clues to the past which he feels must have been a happier time than the present and which could not have been as dreadful as the Party history books would have it. On one of these furtive visits, Mr. Charington shows Winston a secret upstairs bedroom, preserved just as it was before the Ingsoc revolution.

The room is seedy but comfortable, and, best of all, has not been equipped with a telescreen. In a moment of folly, Winston Tents it from Mr. Charrington, and it becomes an occasional haven for the lovers.

Bolstered by their love for each other. Winston and Julia feel there must be other secret rebels against the stifling State of 1984. If only they could make contact ! Winston remembers in particular a man named O’Brien, a member of the Inner Party on whose ugly, intelligent face he thinks he has seen an ironical gleam of contempt for the Party. Winston and Julia go to O’Brien’s plush apartment and ask him if there is really a counter-revolutionary conspiracy. O’Brien answers yes and enlists the lovers in its ranks, but warns them they will probably be killed long before their ideals are realized. He tells them that Emmanuel Goldstein exists and is the author of a heretical book which O’Brien lends Winston.

Before Winston can read Goldstein’s book, however, he is engulfed in preparations for Hate Week. Oceania has suddenly and unaccountably switched sides in the war. Now Eurasia is the ally and Eastasia the enemy. All documents to the contrary must be immediately altered.

Relaxing with Julia after Hate Week, Winston is reading Goldstein’s book which points out the infinite cruelties, lies, and deceptions of the State, when a voice seeming to come from nowhere orders Winston’s and Julia’s arrest. Winston realizes that a telescreen has been in his secret room all.

To his horror, along and that Mr. Charrington is a member of the Thought Police. Guards invade the sanctuary. One of them kicks Julia in the stomach. Winston is hustled off to a stinking dungeon in the Ministry of Love.

There he is kicked, clubbed, and bludgeoned for days until he no longer knows what or where he is. Then he is subjected to weeks of “conferences” with O’Brien, during which he is given electric shocks and kept barely alive so he can confess the error of his rebellion. O’Brien, however, wants more than a confession. He insists that Winston realize in the depths of his soul that Big Brother is all-powerful and all-good, that individuals have no right to private ideas, and that if the Party says two plus two equals five, that is correct. He tells Winston that he himself wrote Goldstein’s book as a trap for rebels.

Through his tortures and O’Brien’s inquisition, Winston clings to one small reason for pride : his love for Julia. Nothing, he thinks, can conquer that, even though he no longer knows whether she is alive or dead. But one of the techniques of the Thought Police is to find out what its victims are most terrified of. O’Brien knows that Winston cannot bear the thought of rodents. A large cage of ravenous rats is placed right next to him, and O’Brien threatens to open the door. In a moment of unreasoning panic, Winston begs him to set the rats on Julia instead, then he knows that he has nothing left worth living for.

After this great betrayal, Winston is set free. He is a shambles, physically, mentally and spiritually. His teeth have been knocked out, his hair is gone. He is not considered worth vaporizing and is given a very minor job that leaves him plenty of time to sit in a café, alone and despised, drinking Victory gin. One day he sees Julia who is equally beaten and dulled by her ordeal. The two have nothing to say to one another after they confess that both had betrayed their love.

One day Winston hears over the telescreen that Oceania has won a great victory in Africa. Formerly Winston would have been skeptical but now he believes it. The brainwashing and shock treatments have succeeded. In the depths of his soul, Winston knows he truly loves Big Brother.