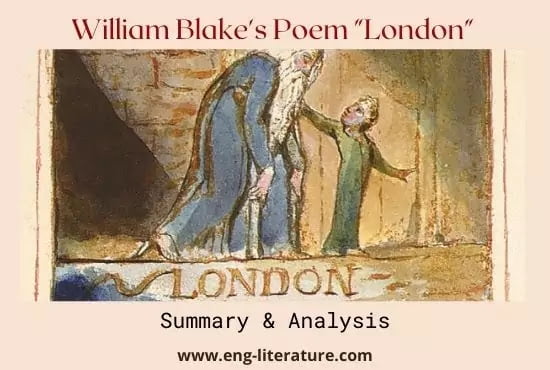 London: About the Poem

London, the touching and inspired poem  belongs to William Blake’s Songs of Experience. These songs, engraved first in 1794, are found poles asunder from his earlier songs- Songs of Innocence, engraved in 1789.

The illustration, that accompanies this song originally, represents a crippled beggar (or, perhaps, a lame prophet), led by a child. Through this child’s song, Blake laments here over human cruelty, infirmity and impiety.

Title of London by William Blake

The title ‘London’ apparently has no link with the poem. “London’ is nowhere mentioned. The series of implications, left by the poet, thus seems to have no bearing on the title London.

Perhaps, the title London is used to signify a place-rather a big city–where the matters of sorrow, related in the song, usually happen

The poem here suggests three evils- cruelty, war and lust. The cry of the little chimney sweeper, made to work, in the cold early morning stands for the first evil. The brutality of man-made war is represented by the hapless soldier’s sigh, whereas human lust and immorality are marked in the harlot’s cry, the new-born infant’s tear and ‘the marriage hearse’.

Though not indicated directly in any way, these evils, echoed in the sons, are related possibly to London. The poet seems to signify here a series of social ills, so commonly manifested in the city life of London, as suggested by the chartered streets and the chartered Thames.

The title London may have been used perhaps in this perspective.

The poem is the bitter utterance of human torments and laments in a world where exploitation, cruelty and prohibitions unrestraint. The sight of sufferings and the cry of pangs are too common in an imperfects human society of sad drudges, helpless infants, miserable chimney sweepers, ailing soldiers and desperate harlots. Woes, frustrations, neglect and lust expose here the social disorder to the core.

The poet wanders through different free, permitted streets, by the side of the flowing (chartered) river Thames. He notices in the countenance of every passer-by the distinct signs of weakness and woe.

He hears, too, in the screams of every one in the cry of dread of every child, and in the voice of every tortured man- the helpless servitude of oppression and injunction.

He hears the cry of every little chimney sweeper, turning black the truth of the church and the deep sighs of wretched soldiers that stain the royal palace with blood.

But what is most penetrating through the streets in midnight is the loud curses of the prostitute that remind him rudely of what threatens the purity of conjugality and wrecks the upbringing of innocent children.

Stanza 1: The sign of exhaustion and depression in every face of every street.

I– this seems to be the poet. But the poem is the song of childhood, no doubt of experience, and the illustration, that accompanies the poem in the original, represents a child, leading a crippled beggar or a lame prophet through the street of a city Naturally, the child is the singer of this song of experience, Wander– loiter, saunter, move aimlessly. Chartered street– this refers to the street which is allowed by the royal sanction to be used freely, without any obstruction. Chartered Thames– the river Thames that flows freely. N.B. There is a slight irony in ‘chartered Thames’, for the river flows at its own sweet will and cares for no royal charter. (i.e., law or code, according permission). Every face I meet– in the face of every passerby. Marks……woe– signs of debility and sorrow.

N.B. The poet emphasizes here all pervasive woe and weakness in common life. In fact, he particularly speaks here of human “Sorrows and sufferings in a social order based on wrongs and imperfections.

Stanza 2 : The all pervasive laments of persons in manacles or fetters.

Every cry……..every man– human laments are all-pervasive, and seems to ring everywhere. Infant’s cry of fear– infant crying pathetically under any threat or fear. In every voice – the ill is not individual but universal. Every ban any kind of restriction or injunction imposed. The mind- forged manacles– the manacles or fetters of restrictions to restrain or suppress the free will of man. Cf Blake’s –

Prisons are built with stones of laws

Brothels with bricks of religion.

Stanza 3 : The echoing and penetrative chimney sweeper’s cries and the unfortunate soldier’s sighs, striking hard against the holy church and the royal palace.

Chimney Sweeper’s cry– the pathos of the little chimney sweeper’s drudgery in the cold dawn at the tall chimney. Cf Blake’s The Chimney-Sweeper.

“A little black thing among the snow

Blackening– the chimney sweeper’s job is to cleanse the black soot of the chimney, but the work blackens the little innocent hard working boy. Blackening church appalls– is a matter of alarm to the church. Appalls– appalls, threatens, alarms. N.B. There is an insinuation against the Christian church that sanctions such shameful, dehumanizing, dangerous drudgery of little chimney sweepers. The sweep boy’s cry, while swecping the chimney, is interpreted by the poet as a reproach to the church. The hapless soldier’s sighs—the unfortunate, wretched soldier’s sigh of grief and despair. The poet is referring to the soldier, disabled or wounded in war. N.B. The poet indicates the exploitation in the existing social order-economic exploitation of child labour in the sweep boy and the political exploitation of the poor soldier by the royal powers. The soldier’s sigh is a reproach to royal authority.

Stanza 4 : The pollution of marital relation and of parental affection in the loud echoes of the harlot’s midnight curses.

Most– in the sense most piercing. Midnight……..curse– the young harlot’s loud curses, echoing through the midnight street. N.B. The poet refers to another social evil-prostitution. This is also indicative of a social infirmity. Blasts……tear– blows away the tear of a new born babe. The implication is the adverse effect of prostitution on the family relation. Blight…… marriage– hearse ruins conjugal happiness. Prostitution affects and damages domestic peace and happiness. The marriage hearse– coffin of conjugality

This is the hearse of conjugal peace and happiness. His insinuation is to the evil of lust that threatens the peace and purity of conjugality and the happiness of child-parent relationship. This is the third evil, typified by ‘lust’.

Blake’s London, like his ‘Tyger’, is rather an unusual poem. This is, no doubt, like the other one, a child’s song, but has underneath an adult experience and observations. Of course, this is a song of experience, as the Tyger is. Yet, there is a marked deviation in the poet’s approach in the two poems. Blake’s child in The Tyger looks, with awe and wonder, at the tiger in his first experience about the dreadful creature

What immoral hand or eye

Could frame thy fearful symmetry?”

But the supposed boy of London has no such experience of shock and sensation. His experience seems to have been already acquired. And he speaks this out in a simple yet penetrative vein of a social realist.

Indeed, he speaks much- much of social truth and reality, possible to adult knowledge and experience only. The poem, as such, becomes something more than a child’s song. It seems to be a social song of a child whose experience enables him to study, observe and speak out and categorically bring out what are the woes and wrongs of society.

London as a poem of Protest against Social Injustices

Blake’s child really speaks out much of prevalent social life and social ills, and what he says deserves both interest and attention. He gives out plainly what he sees clearly–imperfection and depravity in human society and what he feels-the intensity of sorrow and the growing gloom of despair. He scrutinizes the state of society in London and diagnoses what does ail and shake it.

In fact, Blake finds out and laments here over three great evils that besiege London society. These are in particular cruelty, war and lust. They all follow from the infirmities that corrode society at the core. Through his boy’s reflections, the poet protests and exposes their threats and dangers to the security and happiness of society.

First, the boy speaks of the all-pervasive gloom and sorrow in every face he comes across. This is clearly indicative of all unhappy state of people in general with the ‘marks of weakness and marks of woe’ patent in them.

This is not the only wrong in the society of London. There is the wide-spread manacles or fetters of authority to enchain and oppress the working of mind. The authority applies control and subjugation by means of the laws-civil as well as moral-enacted and imposed with ruthlessness. So there is submission in silence, in the hushed voice of the tyrant’s victim. Blake’s boy hears this suppressed cry

“In every voice, in every ban,

The mind-forg’d manacles I hear.”

Cruelty and exploitation run rampant here, and the boy painfully feels the pathos of the chimney sweeper’s cry. This is all a life of misery and privation and serves to blacken the little boy’s destiny yet this has the approval of the church.

The situation of ‘the hapless soldier’ offers no encouraging sight. The poor, disabled soldier, an unfortunate victim of political exploitation, is only left to sigh and pine for what is no more.

The last of these ills, experienced by the boy, is lust. This turns life to all chaos, brings disharmony and unrest, pollutes married life and arrests and stuns the happiness of children.

Blake’s child song is a song of social wrongs, of protest against the same. His insinuations, though given out innocently through a child’s song, are sharp and critical of society and the institutions that uphold wrongs and turns out humanity and compassion and replaces them by apathy and cruelty. The poet exposes here, with restraint, the threefold social evil, already mentioned–the vainglory of the church through the sweep boy, the atrocity of the authority, through the disabled soldier, and the sexual lust, through the youthful harlot’s curse.

As a social poem of sincere protest against cruelty, injustice and impiety, Blake’s London stands out as a powerful and restraint utterance of a social thinker and artist.

With its depth of thought, the poem displays its deft poetic artistry. In its imagery, right choice of diction, and melodious versification, the poem marks Blake’s poetic genius. Blake’s image are vivid, but easy and precise. The images of the chartered Themes flowing at its sweet will, the exhausted and sorrowful faces of the weeping Chimney Sweepers, the blackening church, the blood-stained palace and the youthful harlot’s curse through midnight streets are all picturesque.

Poetic diction is simple and exact like ‘marriage hearse’. The poem has four stanzas of four lines each with alternative lines rhyming. The lines are in iambic tetrameter.