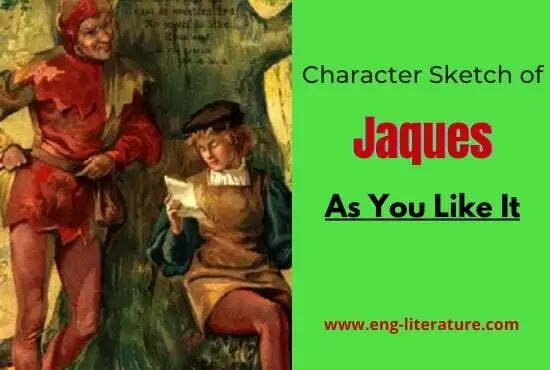 Anti-romantic Jaques is also of Shakespeare’s own making; at first sight it is not clear why Shakespeare invented him. He adds nothing to the plot : Orlando’s courting of Rosalind, the Duke’s return to his Dukedom, the reconciliation between the de Boys brothers, could all be accomplished equally well if Jaques had not existed. Even Touchstone’s marriage with Audrey, which at one moment seems about to depend on Jaques giving away the bride is ultimately postponed to be carried through under the auspicious banner of Hymen.

Perhaps Shakespeare introduced Jaques as an extra-precaution against the play becoming a pastoral convention. For Jaques is an extreme anti-romantic. He loves the life of the greenwood for what it is and not for its fancied prettinesses. He dislikes seeing the deer wounded by hunters and the trees marred by Orlando’s love-songs carved on their barks. He dislikes his fellow men; he no sooner meets Orlando than he says. “God be wi’ you: let’s meet as little as we can.”

But whatever Shakespeare’s motive for introducing him, Jaques having arrived is provided with some of the finest speeches in the play. The famous “Seven Ages of Man‘s” speech, almost a separate poem in itself, has no bearing on the scene in which it occurs and appears to be merely.

Jaques is the experienced cynic sneering at life, and as such he is an excellent complement to Touchstone, the professional jester, laughing at life. As the historical plays contain comedy for contrast, this comedy, contains satire, so that members of the audience who find the main theme too sweet can savour it with the sharpness of Touchstone’s tongue and the bitterness of Jaques’s melancholy.

Jaques’s humorous sadness is not humorous in the accepted modern sense. According to Elizabethan chemistry, an over-charming of one of the “humours” in the human body produced peculiarity of temperament. “Melancholy” was one of these “humours,” but Jaques’s overcharge of “melancholy” is designed only to furnish his audience with amusement.

Jaques is the only purely contemplative character in Shakespeare. He thinks, and does nothing. His whole occupation is to amuse his mind, and he is totally regardless of the body and his fortunes. He is the prince of philosophical idlers; his passion is thought; he sets no value upon anything, but as it serves as food for reflection. He can suck melancholy out of a song.

Jaques Nature in His Youth

In his youth he has been a profligate, self-indulgent and an egotist. He has travelled in Venice, the city of pleasure of the age, and the sundry contemplation of his travels has wrapped him in a most humorous sadness. He becomes a convert and abjures all pleasure. He is a contrast to the Duke, who sees good in everything.

His chief quality is his melancholy. He suffers from a chronic discontent. He has a morose nature, and is a dissatisfied man. He has abandoned the world and hates its pleasures. Even a song has effect of making him sad: “I can suck melancholy out of a song as a weasel sucks eggs,” he says. He declares that he loves melancholy better than laughing and believes that it is good to be sad and say nothing.

Jaques: A Bundle of Contradiction

No reader of the play can fail to notice the inconsistencies in the character of Jaques. Thus we see that he is a mixture of “witty sensibility and merry sadness”-a child of folly and a professor of wisdom. At one time he says “He loves his melancholy better than laughing” and at another time we find him “laugh sans intermission an hour by his dial”. Again though fond of solitude, he is far from being unsocial.

He is both misanthropic and genial, sensual and refined, cynical and liberal, and lofty and low. What are the explanations of these inconsistencies? Stanly Wood has a very reasonable view to offer. His past sensualities, youthful dissipations, and experience of court life have tended to make him somewhat hard-boiled, but his lively imagination and artistic temperament have prevented him from becoming a cynic. Thus his love for music remains unquenched.

Jaques’ Satire on the Contemporary Civilization

Jaques is Shakespeare’s portrait of the melancholy gentleman of the Renaissance period, whose experiences of life abroad have laden him with boredom and histrionic pessimism. His melancholy artificial and his disgust with everything at home is a pose. His part in the play is to stand aloof from the action and make satiric comments on all that happens. He is a chartered critic of the universe.

His soliloquy on the “Seven Ages of Man” is full of satirical tone. Life to Jaques is a pageant of folly and futility. Indeed the whole speech has such a poetic sincerity that it has been mistaken by many readers to be succinct expression of the author’s own conviction. The whole speech is coloured by the sharp disposition of the orator. He sees nothing beautiful or noble in life. The infant mews, the schoolboy whines, the lover sighs, the soldier swears, the judge poses and so on. There is nowhere any indication of the heroism of human nature that makes men strive, aspire and seek.

Again, Jaques’ comment on the life as it is lived in the forest is entirely sour and discordant with the spirit of Arden. His parody on the song of Amiens embodies his views on the life in Arden. It is only an ass who leaves ease and wealth to embrace a sylvan life. He is an extreme anti-romantic and “loves the life of greenwood for what it is and not for its fancied prettiness.” He sees the struggle of life repeating itself’ in folly, selfishness, misery and starvation in the forest. Love to him is a folly of brain, a kind of madness. He says to Orlando “The worst fault you have is to be in love”. To his jaundiced eye everything appears ugly and distorted. It is significant that at the finale of the drama, when there is a return of fortune to all, Jaques chooses not to share fortune,

“Out of these convertites there is much matter to be heard and learned.”

His Melancholy is ‘due to Sentimental Temperament’. According to Prof. Dowden, it is true that Jaques cultivates his mood melancholy like persons of hypersensitive temperament. But it is equally true that melancholy, though consciously indulged, is real and ‘is in part that disgust with self and the world which is the nemesis of choosing the wrong path.”

Some regard Jaques as a cynic whose chief pleasure is to deride humanity and all its affairs and think his melancholy is rooted deep in the bitterness he has experienced in the life he has lived.

“He has tasted pleasure in his youth, he has spent his patrimony in foreign travel, and now in his old age he has retired on his experience. His sole occupation now is to watch the combat he has quitted” (J.C. Smith).

“Tears are great luxury to him; he sips the cup of woe with all the gust of an epicure.”

Even so great a critic as Prof. Dowden remarks :

“Of real melancholy there is none in the play; for the melancholy of Jaques is not grave and earnest, but sentimental, self-indulgent humour, a pathetic foible of character.”

Jaques Sees Evil in Everything

His contemplation of the weeping deer suggests thoughts of the misery, injustice and tyranny that exist upon the earth. He is perpetually finding fault, railing on Lady Fortune, censuring all mankind, aiming his sarcasms at persons of all conditions. Even the innocent life of the Duke and his companions in the forest does not escape his satires. He is a thorough pessimist, believing in no man’s honesty. In his opinion, all are either fools or knaves.

Lastly, we come to Jaques’ humour. His humour is morbid, since it is opposed to all that is healthy. With the corruption of his soul, his humour, so to speak, has gone bad. It has a touch of malevolence to it. His moralisings on the dying stag are born of malevolence. He envies the clothes of the fool because the fool has perfect liberty to attack anybody he likes. If Rosalind’s humour is a tribute to the delightful oddities of things in office, Jaques’ morbid humour is a tribute only to himself.

His attachment for Touchstones is due to two reasons. First, Touchstone confessed himself to be a fool and this pleases the vanity of Jaques. Second, Touchstone censured Lady Fortune and his suits Jaques own cynical mood.

The part played by him in the action of the drama is insignificant. Only once does he perform an action when he tries to prevent the illegal marriage of Touchstone and Audrey. In fact, he is a philosophical idler. Still his importance in the general scheme of As You Like it is very great. He is, of all the characters, the gravest and the most intellectual. He lends a serious tone to this gay comedy by his somber reflections.

.…And all the men and women merely players;
They have their exits and their entrances;
And one man in his time plays many parts,…

Give me leave to speak my mind.

The worst fault you have is to be in love.

I am so. I do love it better than laughing.