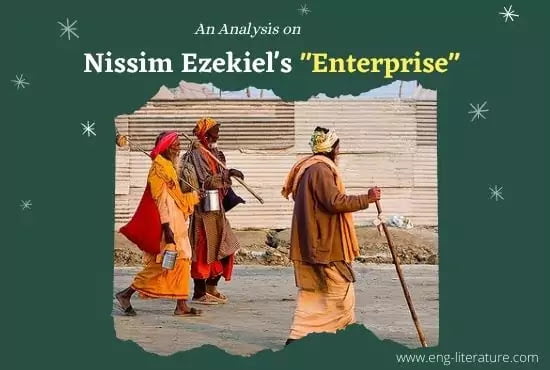 “Enterprise” is a beautiful symbolic poem dealing with the theme of the rise and fall, the wishes and aspirations of India. It shows the various stages of Indian culture and civilization which got several jolts and jerks in the path of development. It covers the story of both the happiness and sorrow starting from the Great Vedantic era to the modern time. The whole poem has been visualized through an extended metaphor of pilgrimage where the main purpose of the pilgrim is to attain spiritual bliss. The poem, as we shall see, is suffused with some powerful images and symbols, words and phrases which are modern, allusive and complex in tone and temper.

The poem opens with the image of pilgrimage which denotes here the early phase of our culture and civilization, particularly of the Vedic era.

“It started as a pilgrimage

Exalting minds and making all

These lines, at first, denote the spiritual journey of our great saints and sages whose mission of life for the people of the country was like a pilgrimage. They were the pilgrims of the sky’ who went to a pilgrimage for the enlightenment of knowledge. The phrase ‘exalting minds’ shows the great philosophers and thinkers of the olden days who wanted to make the burden of the people light through their knowledge of pilgrimage. The word ‘pilgrimage’ has u religious overtone which shows that in our past days the people had a religious mission before doing any work. On the second level of meaning, it also suggests that during the pilgrimage, a pilgrim should have a light burden so that he can go to the pilgrimage easily.

The second stanza deals with the second stage of Indian culture and civilization during the callous administration of the British rule where the poor peasants of India were bought and sold like goods of the market.

“On things the peasants sold and bought,

The way of serpents and of goats

Three cities where a sage had taught.”

Here the images of serpents and goats are highly symbolic. It shows the British people who ruled over India tactfully and very intelligently. The word ‘serpents’ alludes the story of the Bible in which the Satan, in the form of a serpent, lures the woman to eat the forbidden fruit. Similarly, during the British rule we see their ‘rule and divide’ policy. They lure and attract several kings and princess of India and very tactfully caught them in their fabricating net.

The phrase, ‘Three cities’ seems to denote the three major metropolitan cities of India where the English, at first, set their feet strongly. ‘The way of goats’ suggests the merciless killings of the poor and innocent people of India who were butchered like goats. ‘A sage’ perhaps denotes the Great Bapu, Mahatma Gandhi. The early phase of the national movements was very kind and liberal. The freedom fighters wanted to achieve the freedom and liberty of India through requests, writings and various thoughts. The phrase ‘copious notes’ seems to denote this fact.

The third stanza deals with the partition of India in 1947. It also shows the communal riots and different castes, classes and creeds of India which hamper progress of the nation:

“But when the differences arose

On how to cross a desert patch

We lost a friend whose stylish prose

Was quite the best of all our batch

A shadow falls on us – and grows.”

The term ‘the differences’ denotes the various types differences-social, political and religious. We know that before partition, there were several differences of ideas, rites and rituals between the Hindu and the Muslim. In poetic language the poet says that it was a difference how to cross a desert patch. The phrase ‘desert patch’ suggests the ignorance, darkness and religious differences of the contemporary time. So, in the process of crossing the desert patch, we lost a friend whose stylish prose was quite the best.

Here this connotation shows the partition of India into two lands- India and Pakistan. And after this partition, there has been a recurrent shadow on both these countries. The shadow is not totally disappeared or rooted out, but it is so strongly planted that it keeps on growing every day. Terrorism is one of the biggest shadows which we face today.

After the partition, India had to face two attacks which created big bumps in the path of the pilgrims. The first attack was by China, once our bosom friend but proved to be a serpent beneath the rose in 1962 and the other was by Pakistan in 1965. The poet observes:

“Another phase was reached when we

Were twice attacked and lost our way.

A section claimed its liberty.

To leave the group. I tried to pray

Our leader said he smelt the sea.”

In the fifth stanza, the poet has presented a realistic picture of the growing population and its dangerous consequences. It also shows the various social and religious maladies which India has to face during seventies and afterwards. The main problem was poverty which made the people broken and bent :

“We noticed nothing as we went

A straggling crowd of little hope,

Ignoring what the thunder meant

Some were broken, some merely bent.”

The poet says that in spite of the various social, political and religious upheavals, we kept on going our ways of pilgrimage. We have a straggling crowd with a little hope. We were so much beaten by the constant blows of social evils and political upheavals that we were on the verge of losing our hope. But we kept the hope in our bosom ignoring what the thunder meant. Here the word ‘thunder’ denotes the economic, social, religious and political thunder which made the pilgrims afraid of going to the pilgrimage to get the truth and knowledge, light and divine bliss. In this process people had to face the blows of poverty. The poet has taken a modern term ‘soap’ which shows the common things of life. It is a modem image which reminds us of T. S. Eliot and Yeats in Modem poetry.

The last stanza of this poem ends with the note of uncertainty hopelessness and darkness. The poet says that though the pilgrims have reached the place of pilgrimage after facing various trials and tribulations, ups and downs they hardly knew why they were there. There was a sense of darkness on the faces of every pilgrims. The poet observes:

“When, finally, we reached the place

We hardly knew why we were there,

The trip had darkened every face

Our deeds were neither great nor rare.

Home is where we have to gather grace.”

The poet is of the view that whatever we, the pilgrims, did was neither great nor rare. In order to get a sense of truth and knowledge, peace and prosperity, the pilgrim has to devote himself to the home where he can gather grace. The word ‘home’ here is very apt and suggestive. It suggests our great past, culture and civilization, the great truth and knowledge, love and affection for which the people of India are known all over the world.

So, if the pilgrim wants to visit the pilgrimage in the true sense of the term, he should visit to his inner being where only can he get the spiritual bliss. Here, the last lines have a deep Vedantic tone which reminds us of the thought of Kabir and Nanak, Tagore and Sri Aurobindo. The poet has very appropriately used the word ‘home’ in place of ‘house’. We know there is a great difference between house and home

“A house is made of walls and beams

A home is made of love and dreams.”

Thus, the poem Enterprise begins with pilgrimage, the outward realization of truth and ends with home, the inward bliss of knowledge and truth. So, the poet’s efforts in this poem is to connect the people of modern time to its past glory and grandeur, to visit the home where they can gather grace.

In short, Ezekiel’s style of poetry is always full of the essentials of a rich and profound poem. It has not the ambiguities, complexities, ironies and paradoxes which we generally see in the poetry of Yeats and Eliot, Pound and Auden, but it is simple and clear, though at times it is punctuated with some hard and solid images which call for the reader’s deep concern of the demands of modernity. His poetry is generally meant for the general people. In one of his articles, Ezekiel rightly says:

“My observation on the subject and its connection with allied themes may interest the general reader, whom I have in mind, and not only poets or lovers of poetry.”

This is exactly what we find in this poem, Enterprise. Here we have a general topic of the rise and fall of the nation at various stages. But his presentation is not a collection of facts and figures: it is richly woven into the fabric of art and literature.