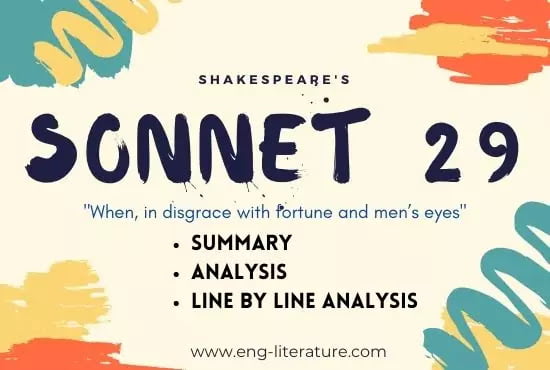 Sonnet 29, “When, in disgrace with fortune and men’s eyes” by William Shakespeare is a popular sonnet that captures the poet’s mood of depression that is relived and changes to the harmony of remembered love.

When I am disgraced by fortune and men’s eyes, between all alone my outcast state, and trouble, with my bootless cries, heaven that remains deaf to them and look down upon myself and curse my fate.

I. The poet’s mood of depression:

The poet is haunted with a sad sense of frustration and humiliation. He finds himself wretched, alone deprived of fortune and despised by worldly opinions. His complaints to Heaven seem all ineffective.

I (then) wish to be like one, richer in hope, to have the appearance of another and to possess friends like some others. I desire to have (then) a particular man’s art and another’s scope and remain contented least with what I enjoy most.

II. The poet’s yearning for possessing what he lacks:

The poet feels envious and desirous of all that others have but he has not. He wishes to be animated with their hope and enriched with their good features, friends, skill and opportunity. In fact, he is thoroughly discontented with what he has.

(When) I am almost despising myself in these thoughts, I think by chance on thee. And then I have the state of the skylark that arises, at the break of day, from sullen earth and sings hymns at the gate of heaven.

III. The effect of remembrance of the friend’s sweet love:

Yet, in such a state of despair and distress, the poet feels enlivened by remembering his friend’s sweet love. This elevates his spirit and fills his mind with spontaneous delight.

The remembered sweet love (of my friend) brings such wealth (to me) that I then scorn to change my state with kings’.

The poet attains such a state of mental affluence that he refuses to exchange his position even with any royal state.

The theme of the sonnet presents explicitly the poet’s feeling of the worldly failure and the consolation brought by the thought of the sweet love of his friend. The poet finds himself disgraced and humiliated by his own misfortune and worldly opinions. In such moments of his life, a mood of depression captures his mind and bunts him with the sad sense of his own failure to possess what others have, such as hope, good appearance, friends, skill and opportunity.

In this mood of dejection, a timely remembrance of his friend’s sweet love enriches and inspires his mind to such an extent that he refuses to have any change in his state. In fact, inspirited with the warmth of love, the poet’s mind transcends all earthly manners and material desires and achieves a perfect state of happiness and contentment.

The sonnet (No. 29) ‘When in disgrace with fortune and men’s eyes has a subsidiary title, ‘A Consolation’. The first two quatrains trace the poet’s disconsolate mood. An utter sense of frustration possesses his mind and leads him to hour jealousy and envy for what he has not. He feels disgraced, ‘between his outcast state’, curses his ‘fate’ and wishes to have what different people possess and enjoy hope, health, friendship, fortune, efficiency and opportunity. This sense of gloom is deep and casts the poet’s mind with despise for himself.

This is, however, followed by the poet’s sense of consolation. The third quatrain and the concluding couplet (the sestet) indicate a change in the poet’s mood. His grief-stricken and restive mind is brought to harmony by remembered love. His thought of his friend’s sweet love revives his spirit and restores his mind to tranquility. Love brings to him consolation amid his mental anguish and dejection.

As the poet’s consolation, sums up his sad lamentation for his wretched and unfortunate state of life, the title Consolation appears quite appropriate.

Lines 1-4: When at a time. In disgrace in a state of humiliation and shame.

When in….eyes– when the poet is subjected to misfortune and severe humiliation. Disgraced with fortune – disgraced by the lack of fortune, not favored by fortune.

NB. The time is extremely revealing. Shakespeare gives out here much of his own slate during the years 1592 and 1593. Those years were for Shakespeare a period of extreme hardship and utter discouragement. With the closure of the theatres, it was very difficult for the poet to our even his hare livelihood. In the year 1992, there came in addition to the disgrace of fortune, the disgrace in ‘men’s eyes which was caused by Robert Greene’s death bed attack on him in print. That attack upset Shakespeare much and led him to resentment.

I have bewept it worthy husband’s death.

Outcast state – in a lonely state, ignored and despised by all. The word “state’ has specific significance here. It implies the poet’s condition in disgrace and misery. Deaf heaven – heaven is deaf, because his prayers and lamentations have all been ignored. Bootless – fruitless, unavailing, profitless, ineffective. Cries –  lamentations. Bootless cries – the poet’s complaints are all unavailing, Look upon myself– the poet muses upon his state. Of course, the poet finds nothing but distress to think of his state. Curse my fate– he curses his unfortunate lot.

NB. The quatrain brings out the poet’s sense of utter despondency and gloom.

Lines 5-8: Wishing me-the poet wishes for himself. One more rich in hope – a person who possesses high hopes. Wishing….we in hope– the poet, in a despondent mood, feels envious of those who are inspired and activated with the flame of hope.

NB. The despondent state of the poet’s mind is conspicuously noted here. The lines become impressive with autobiographical as well as psychological touches.

Featured– gifted with good features, blessed with bodily beauty. Featured like him-the poet aspires for the good look and the sound health of some healthy and graceful men Friends possessed possessing good friends. Like him….possessed – the poet wishes to have the favourable situation of the man who possesses a good many friends.

NB. The poet craves for good physical features and true friends. There is again, a just reference to the poet’s personal despondency at a time when he had to face the hostility us fortune and men.

This man art– the excellence of one as the artist or the man of letters. Of course, the expression may mean simply ‘efficiency’ or ‘ability’. That man scope – the opportunity nr range of action of it particular fellow. The poet speaks of those persons who are favoured with good situations. Desiring this….scope– the root envies the artistic genius of a particular fellow or the opportunity or scope of another.

NB. Shakespeare strikes here a universal note. His sense of frustration and envy is quite common and universal. The post moves from person to person, feeling envious of the particular quality or talent in each, which he does not himself possess. This is a universal habit of Mankind.

NB. The expression, perhaps, bears a reference to Shakespeare’s own profession of Acting. This is, indeed, interesting for it was natural to the poet, in his moods of disappointment and depression to find utmost dissatisfaction in what gave him most pleasure- his acting. The autobiographical aspect of the Shakespearean sonnet is here striking.

Lines 9-12 : Yet-nevertheless. In those thoughts– in his moods of utter distress and disappointment. Despising– hating. Myself almost despising– the poet is almost induced to despise or hate himself for his misery and misfortune, for his failure to possess what other people have or enjoy. In these..despising– in his moods of utter dissatisfaction and despondency, the poet almost begins to despise himself for his failure and suffering. Haply– by chance, accidentally. I think on thee– the poet begins to think of his dear friend. Haply … thee– suddenly the poet happens to remember his friend. And then suddenly the poet happens to remember his friend. And then– immediately. State– condition. Like to the lark– in the manner of the skylark. At break of dawn– i.e., in the early morning. Arising– soaring into the sky. Sullen– grave, painful. Sullen earth– earth that looks dull and joyless. Sings hymns-sings the songs of prayer. Heaven’s gate– the high altitude of the sky. The lark….heaven’s gate– the skylark, at the early hour of the dawn, soars high into the sky and begins to chant from a high altitude. Cf. Shelley’s “To a Skylark”

That from heaven or near it

In profuse strains of unpremeditated art,

Then my state….gate– there is an elevation in the state of the poet who rises above his petty earthly suffering and failure and begins to sing with the full throated ease of the skylark.

Lines 13-14 : Thy sweet love remembered – the happy memory of the sweet love of his beloved friend. Such wealth brings– brings so great a store of comfort and peace. I scorn to change– the poet refuses to interchange his position. With kings-with the power and prosperity of the kings.

NB. The relieving effect of remembered love is noted here as in other sonnets. Cf.

Ah, but those tears are pearl which thy love sheds,

And they are rich, and ransom all ill deeds.