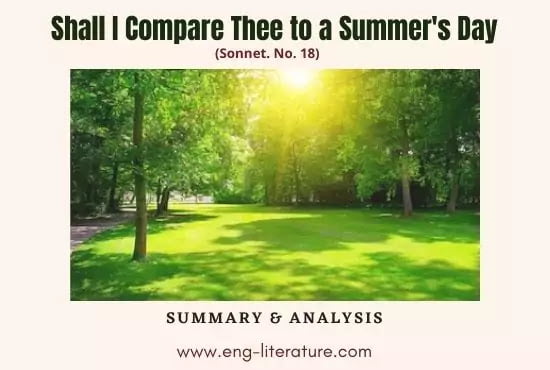 Shall I Compare Thee to a Summer’s Day

Shall I Compare Thee to a Summer’s Day Meaning

If it should be fair or exact to compare you (Shakespeare’s friend, Fair Youth) to a Summer’s day (the most charming and beautiful season in England). The poet’s intention is to assert superiority of his friend’s beauty in comparison with summer’s day.

If I should compare you to a summer’s day, you would appear to be more beautiful and more gentle than it. Rough winds shake the much-loved rosebuds of May, and summer’s tenure is only for a short time.

The sun shines too hot at times and often its golden-coloured face is made less bright by the presence of clouds in the sky. The beauty of every beautiful thing or person decays (or everything is despoiled of its external ornament) sooner or later owing to some chance or bad luck or owing to the (seasonal) changes in the course of nature.

But your summer i.e. beauty) made eternal through my verse will never fade, nor will you lose any beauty you possess (for the same reason). Death will not proudly say that you walk in his shadowy realm (dark continues to grow until the end of time. region over which he rules) when in my immortal verse your fame of beauty

As long as men will remain alive and can read poetry with their eyes, so long will live this sonnet, and this grants immortality to you.

Addressed to the Fair Youth

Sonnet 18 (Shall I Compare thee to a Summer’s Day) is included in the sonnet sequence entitled Shakespeare’s Sonnets. It belongs to the first group of poems (1-126) addressed to the ‘Fair Youth’ whose identity remains covered in mystery.

As to the identity of his friend, the fair youth, there has been a good deal of controversy among the critics. The Earl of Southampton and the Earl of Pembroke are the two who dispute the honour of being Shakespeare’s friend and the subject of the sugared sonnets. Mr. Fowler has rightly put it, “We have no means of deciding whether Mr. W. H. (the ‘online begetter’) is William Herbert, Earl of Pembroke, or Henry Wroithesly, Earl of Southampton or another.”

Individual Touch in the Sonnet

Through this sonnet the poet pays tribute to male beauty and thereby follows the similar tradition of Greek and Latin poetry that come to England (together with the celebration of masculine love) with the advent of the Renaissance. In it he refers to his friend’s ‘eternal summer’ which shall not fade’ by virtue of his poetic art. The ‘summer’ metaphorically stands for beauty, and its unfading nature he borrows from the Platonic conception of Ideal (Absolute or Archetypal) Beauty which is different from Natural Beauty that is subject to changes and declination.

The Poet Convinced of the Return of Love

Although ‘a summer’s day’ is the pinnacle (=highest point) of beauty’ in a country like England, yet he proposes to show the fair youth to be more lovely and more temperate’ (gentle; sweet, moderate) than such a day. This he does for his devotion to him and for friendship’s sake. “The beginning of this friendship,’ A. C. Bradley rightly remarks, ‘seems to have been something like a falling in love.’ Shakespeare could never have offered love had he not been sure that the love was reciprocated.

Some Salient Features of the Sonnet

Sonnet 18 is the first of the sonnets that became ‘very famous’ by setting before us the fearful problem of turning it into prose. Besides the above, the sonnet earned attention for two other reasons, too: certainty of love and Shakespeare’s confidence in the quality of his verse. This Sonnet is magnificent throughout from the perfect beauty of the opening quatrain to the sweep and rush of the triumphant final couplet. The rhythms are varied with the subtlest skill, and the majestic line – ‘But thy eternal summer shall not fade’ reverberates like a stroke on a gong.

Natural Summer and the Youth’s Summer

When the sonnet begins with the question ‘Shall I compare thee to a summer’s day?” we do not have the slightest idea that the poet’s intention is to establish the superiority of human beauty over the natural one. We rather thought that the reverse would take place.

Despite the majority view that a summer’s day is the most beautiful thing one can think of in the English climate, the poet goes on to point out its defects one by one. Rough winds often shake the darling (rose) buds of May’ (which was then included in the summer season). Summer’s ‘lease’ (i.e. duration) is also for a short while, it being the shortest season of the country. Sometimes the sun (‘the eye of heaven’) shines too hot and frequently its brightness (gold complexion’) is ‘dimmed’ by the presence of clouds in the sky. Finally, the beauty of all beautiful things (particularly the rose and the sun) ‘declines’ or in ‘untrimmed’ = despoiled) as a result of ‘chance’ accident) or ‘course (= onward movement that brings about changes of seasons) of nature.

In contrast stands the Friend’s ‘eternal summer’, which does not ‘fade’, like the rose, nor ‘lose possession, as one may forfeit a ‘lease’, nor wander in death’s ‘shade’, like the sun in the Antipodes ( any of the two places on the earth’s surface diametrically opposite each other).

The octave ends with the observation that the beauty of every beautiful thing or person becomes subject to a process of inevitable and irreversible deterioration after a time (‘every fair from fair sometime declines’) on account of chance or nature’s changing course’. This immediately brings to the poet’s mind the fact that the physical beauty of the fair youth is likewise subject to decay because of the aforesaid causes.

The poet’s love to his friend and his concern about his beauty is such that he cannot allow this to happen. He remembers the special power that he possesses by virtue of which he can confer immortality on the loved one. Emboldened by this he assures his friend in this way:

“But thy eternal summer shall not fade,

Nor lose possession of that fair thou ow’st,

Nor shall death brag thou wander’st in his shade

When in eternal lines to time thou grow’st.”

This immortalization-through-verse theme has received wide attention from critics. A. L. Rowse remarks: “Though a convention with Renaissance poets, it was in this case prophetically justified.” Another critic states: “The poet’s boast that his poem would make his friend immortal is not peculiar, it was the fashion of the age to boast in this way.”

To establish the superiority of human beauty over nature’s the poet in the octave has made use of descriptive terms drawn from the world of nature.

The third line- ‘Rough winds do shake the darling buds of May’, for example, is filled with the most delicate and tender solicitude (= care or concern) for the fragility of beauty – and not just the beauty of buds

The fourth line- ‘And summer’s lease hath all too short a date’, suggests that the bloom (greatest perfection) of beauty or the prime of youth in the human case lasts only for a short period.

The fifth line- ‘Sometime too hot the eye of heaven shines‘, suggests that even the most seemingly benign forces of nature, the eye of heaven’, can induce drought and parch the skin’ which is a sure sign of the eventual loss of beauty.

The Sixth Line– ‘And often is his gold complexion dimmed’, hints the frequent changes of fortune which affects a man’s mental state (i.e. he becomes sorrowful with the loss of happiness). It is, thus concerned with mutability.

The last two lines of the octave shows that there is no remedy against gradual loss of beauty and that to be despoiled or stripped of external ornament is an inevitable process that every human being must face.

Shall I Compare Thee to Summer’s Day Theme

The sonnet is rich in imagery. The majority of the images have been drawn from the field of nature. Of these the most prominent are: a summer’s day, rough winds, the darling buds of May, summer’s lease, the eye of heaven, every fair (= beautiful thing or person), shines, declines, dimmed, untrimmed, eternal summer, shade and eternal lines. There are also different types of images in the poem: visual (gold complexion), tactile (winds), olfactory (buds of May), auditory (brag), thermal (hot) and kinesthetic (nature’s changing course).

The poem also uses some figures of speech (metaphor in ‘a summer’s day’ and ‘eternal summer’, periphrasis in the eye of heaven’, and personification in ‘Nor shall death brag’) as well as a symbol (in ‘the darling buds of May’ which may be variously interpreted).

The poet’s mastery in diction can be found in such expressions as ‘more lovely and temperate’, ‘summer’s lease’, ‘every fair from fair sometime declines’ and ‘thy eternal summer shall not fade!

The poem deserves attention as a sonnet. It maintains the Shakespearean rhyme-scheme (i.e. three quatrains (abab; eded; efe) and a couplet (88) but is Petrarchan in its thought-division (the poem being clearly divisible into two parts: the octave and the sestet).

A single thought based on a contrast (mutability versus eternity; changeable beauty in nature versus stable and unfading beauty in art) runs through the poem and imparts it that unity of thought for which a sonnet is distinct from other forms of poetry. It is written in iambic pentameter with sufficient variations (the first foot of the second line being trochaic with pyrrhic and spondee placed respectively in the first and second feet of the fifth line) to free it from the charges of mechanical regularity.

Technical mastery apart, the poem contains a sincere personal voice as well as universal statements (such as ‘every fair from for sometimes declines’ or ‘summer’s base hath all too short a date’) for which Legouis rightly regarded it as one of the ‘precious pearls of Elizabethan lyricism’.