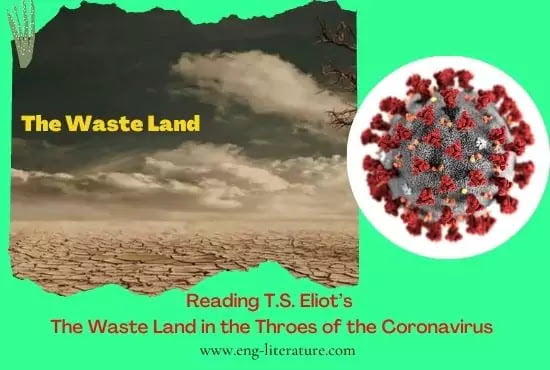 We are approaching the centennial of the publication of T.S. Eliot’s opus The Waste Land.  Written in the wake of World War I, Eliot captured the spiritual malaise, the economic upheaval, and the unprecedented destruction that pervaded postwar Europe and beyond.  Nineteen twenty-two was the year that changed literature, as the subtitle of Bill Goldstein’s recent study The World Broke in Two claims, ushering in modernism.

The Waste Land is a complex poem: employing a variety of voices, literary forms, and allusions to reflect the sterility of modern life.  Eliot offers this tableau not as a unified image, but more as light and fog echoing off pieces of shattered glass.  No single reading of the piece is possible, nor was that Eliot’s intent.  It is as if the reader delves into a world with sights and sounds all its own, with fragile textures and arid imagery.

I have perused The Waste Land as an undergraduate and graduate student and have reread it many times as a professor:sifting through its layers, hoping to unearth new understandings as an archeologist meticulously probes a tell.  During spring break 2020, I found myself returning to this five-part epic finding ancient echoes that reverberate with a world in the throes of the Coronavirus.

Eliot’s Waste Land is a dark, hypnogogic landscape.  Littered with contradictory images — dust and rain, impotence and promiscuity, the occult and the biblical — it leaves the reader, in search of redemption, between “[a] heap of broken images” and a Hindu benediction, feeling as if this apocalyptic tribulation is not only inescapable, but, in the end, is as hopeless as what may lie beyond the poem’s 434 lines.

Eliot’s pièce de résistance retains its relevancy — its themes woven into the hearts of a generation facing a virus with a potential not seen since the Spanish Flu pandemic of 1918.  According to the Center for Disease Control (CDC), “It is estimated that about 500 million people or one-third of the world’s population became infected with this virus.  The number of deaths was estimated to be at least 50 million worldwide with about 675,000 occurring in the United States.”[1]  Black-and-white photographs of this crisis show parts of the world as a virtual wasteland, with casualties being two-and-a-half times what they were in the First World War.  It is hard not to connect the Spanish Flu and the Great War: the former beginning eleven months before the latter and lasting for two years post armistice.  Eliot’s Waste Land emerged from the debris of this milieu.

War is still with us, though we have not faced a global conflict for three quarters of a century.  However, we are facing an international pandemic, the likes of which we haven’t faced in a century.  Notwithstanding what the naysayers proclaim — e.g. more people contract and die from the regular flu each year — the Coronavirus is different.  It is highly contagious, and we have no medicinal way to combat it.  As the scientific and medical communities work tirelessly to develop a vaccine, people across the world are being asked to limit their social interactions and, in some cases, to self-quarantine until we can level the spike of infected patients.  In short, we are trying to avoid the tragic fallout that accompanied the Spanish flu.  With a century of technological progress behind us, including our ability to receive constant updates on our iPhones, we can.

That said, the Ides of March brought heightened anxiety across the United States.  Looking at what occurred in China and Italy over the past few months, people see a tide washing across our shores, bringing with it an infection that may be more devastating emotionally and economically if not physically.  There are questions.  There is confusion.  There are images, almost prophetic, that find a counterpart in one of the first poems of the modern literary movement.

In less than two weeks we will enter April, “the cruelest month.”  It will breed lilacs from a dead land.  This image, funereal in itself, suggests somnolence: lilacs being an alternative, herbal therapy to help people sleep.  The Waste Land is filled with people who are both awake and asleep at the same time: be they images that arise from the Tarot deck, or the drowned Phlebas adrift in suspended animation, or the crowd flowing over London Bridge (which, by the end of the poem, is falling down), or the woman who submits to the lifeless sexual advances of “the young man carbuncular” (a bacterial infection that emits puss), or the “lidless eyes” playing a game of chess while “waiting for a knock upon the door.”

Because of its spasmodic structure, The Waste Land takes us on a journey that transcends time and place.  It’s overarching thesis (if it has one) comes in its fourth to last line: “These fragments I have shore against my ruins.”  This line enables us to look at the poem in retrospect to gain some semblance of where we have been and what we have experienced. We have been through a world of fragments and have seen that the world is fragmented.  The Waste Land shows us that the surreal is a more accurate depiction of reality than what we assume.

The Coronavirus has changed our reality as well.  As of this writing, we are only a week into radical social changes.  Most schools are closed.  Concerts and sporting events have been cancelled.  Restaurants are open for take-out orders and delivery only.  People are working from home, if they are fortunate enough to do so.  Video clips on social media show the burgeoning panic: people fighting for toilet paper and hand sanitizer between empty grocery store shelves.  Talk of “social distancing” and “shelter in place” are now part of the lexicon of those glued to the news to get the latest statistics: the number of those infected by (and the number of those who have succumbed to) COVID-19.  It is a time of despair.

Eliot wrote The Waste Land at a time of personal despair.  His marriage to his first wife, Vivienne Haigh-Wood, who suffered from a variety of physical and psychological ailments, was rapidly declining.  Eliot himself suffered from severe depression and, under the advice of Dr. Roger Vittoz, spent some time at a sanitorium in Lausanne where he finished the poem.

Eliot would eventually escape from his own waste land.  His marriage to his second wife, his former secretary Esmé Valerie Fletcher, would bring Eliot, thirty-eight years her senior, the peace he sought his entire life.  However, had Eliot not been married to Vivienne, modern poetry could have been different.

In a recent article, John Haffenden writes, “Interviewed in the late 1990s by Blake Morrison, Valerie declared her opinion of Vivien Eliot in these terms: ‘Her importance is, that she made him suffer and we got The Waste Land.  We owe the poem to her, no question; he wouldn’t have written it if she hadn’t given him such hell.’”[2]

It is hyperbolic to suggest that we are in hell right now.  Far from it.  However, it does seem that a portentous wave is on the horizon.  True, the reported cases of people infected with COVD-19 is far less than the seasonal flu.  The CDC estimates that there were 23,000 to 59,000 flu-related deaths in the United States between October 1, 2019 and March 14, 2020.[3]  So far, China has lost 3,256 people to the Coronavirus; Italy has lost 4,032 (as of March 21).  That is significantly less than even semi-annual flu deaths.  However, the safeguards that have been instituted in the United States are an attempt to stay ahead of the curve, to avoid the casualties we suffered in 1918.

As the daily news reports the rising number of those infected, that wave seems to be getting closer and larger.  It feels as if we are in the proverbial calm before the storm, facing an enemy we cannot see.  One senses the same as he or she traverses The Waste Land.  In his notes on the poem, appended after its publication, Eliot said that the mythic prophet Tiresias “although a mere spectator and not indeed a ‘character’, is yet the most important personage in the poem, uniting all the rest.”  Tiresias is also the unifying character in Sophocles’ Oedipus Rex: the blind prophet who can see what others cannot, offering the reason for the plague (or virus) that has infected Thebes.  Tiresias speaks in the third part of The Waste Land, telling us that he “walked among the lowest of the dead,” as Odysseus discovers in Book XI of The Odyssey.  Odysseus must also walk among the dead before he can return to Thebes.  We are also traversing Hades.

But we do not walk alone.  In the last part of The Waste Land, a pertinent question is raised:

Who is the third who walks always beside you?

When I count, there are only you and I together

But when I look ahead up the white road

There is always another one walking beside you

I do not know whether a man or a woman

—But who is that on the other side of you?

Eliot, again in his notes, states that this is a phenomenon that occurred during an “account of one of the Antarctic expeditions” in which the explorers “had the constant delusion that there was one more member than could actually be counted.”  Eliot’s notes were purposely misleading, and we see that here.  The unknown third traveler is an allusion to the risen Christ who appeared to two disciples on the Road to Emmaus (Luke 24:13-35).  The story’s power lies in the fact that neither Cleopas nor his unnamed companion recognize Jesus until he breaks bread with them after interpreting “to them the things about himself in all the scriptures.”  One thinks of the poet himself, who had been on a spiritual quest since his time at Harvard University and converted to Anglicanism five years after the publication of The Waste Land.  Had he, too, not recognized the hooded Christ in his personal hell, even though he walked beside him and other “hooded hordes swarming / Over endless plains, stumbling in cracked earth”?  In the poem, this scene occurs between no “sound of water” and “a flash of lightning…Bringing rain.”

Today, the hordes, not so hooded, are walking their neighborhoods with loved ones, keeping a safe distance from others who are trying to find something to do during the COVID-19 shutdown.  Hopefully, there is redemption on the horizon, even if it is yet to be seen.  In the interim, there is growing fear over an enemy that cannot be seen.  Will we heed its voice or that of a possible, albeit shrouded, spiritual restoration?

In the Voices and Visions series (a program of one-hour documentaries on various poets produced in 1988 by the New York Center for Visual History), Sir Stephen Spender speaks of a conversation he had with Eliot — his first, actually.  Spender remarks, “On the first occasion that I met Eliot I asked him whether I was right to have the impression from reading The Waste Land that civilization was completely collapsing.  And he said yes, he did think this.  And I remember saying, ‘Well, how do you think it will end?’  He said, ‘It will end with people killing each other in the streets.’”

Let us hope this does not happen.  Let us hope that the thunder will eventually speak and will cleanse this dry land.