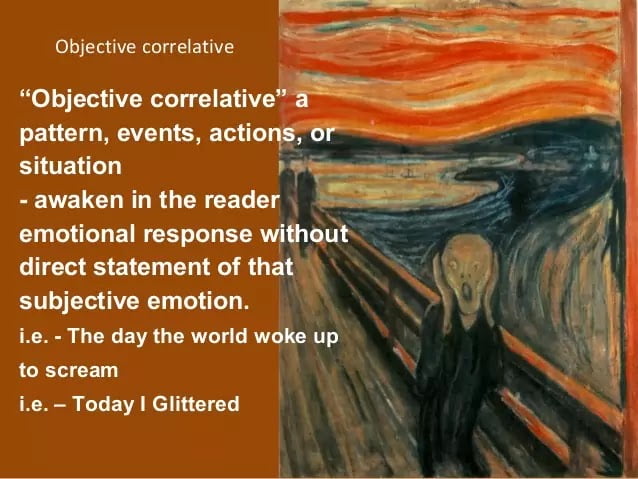 
The
theory of the Objective Correlative is undoubtedly one of the most
important critical concepts of T.S. Eliot. It exerted a tremendous influence of
the critical temper of twentieth century. In the concept of the ‘objective
correlative’, Eliot’s doctrine of poetic impersonality finds its most classic
formulation. Eliot formulated his doctrine of the ‘objective correlative‘ in
his essay on “Hamlet and his Problems”.
According
to Eliot, the poet cannot communicate his emotions directly to the readers, he
has to find some object suggestive of it and only then he can evoke the same
emotion in his readers. So this ‘objective correlative’ is “a set of
objects, a situation, a chain of events which shall be the formula of that particular
emotion; such that when the external facts, which must terminate in sensory
experience, are given, the emotion is immediately evoked.” It is through the
objective correlative that the transaction between author and reader necessarily
takes place. For this object is the primary source of, and warrant for, the
reader’s response whatever that may be; and it is also the primary basis for
whatever inferences we may draw about what it is that the “author wanted
to say.” Briefly speaking, what Eliot means by his doctrine of the
objective correlative is that a great work of art is nothing but a set of
conceptual symbols or correlatives which endeavor to express the emotions of
the poet, and these symbols constitute the total vision of the creative artist.


Eliot himself defines ‘objective
correlative‘ as “a set of objects, a situation, a chain of events, which
shall be the formula” for the poet’s emotion so that “when the
external facts are given the emotion is at once evoked.” For example, in Macbeth
the dramatist has to convey the mental agony of Lady Macbeth and he does so
in “the sleep-walking scene”, not through description, but through an
unconscious repetition of her past actions. Her mental agony has been made objective,
so that it can as well be seen by the eyes as felt by the heart. The external
situation is adequate to convey the emotions, the agony of Lady Macbeth.
Instead of communicating the emotions directly to the reader, the dramatist has
embodied them in a situation or a chain of events, which suitably communicate
the emotion to the reader. Similarly, the dramatist could devise in Othello a
situation which is a suitable objective correlative, for the emotion of the
hero. Hamlet is an artistic failure for here the external situation does
not suitably embody the effect of a mother’s guilt on her son. The disgust of
Hamlet is in excess of the facts as presented in the drama.


It becomes apparent that it is both the
intensity of the emotion nor the greatness of its components that determines
the poetic quality of a poem but what matters is the intensity of the fusion,
and one of the ways in which the poet achieves this intensity is through the
embodiment of an emotion in a concrete object. That is why Matthiessen
interprets the term ‘objective correlative’ to mean a situation or image which
represents the poet’s emotion. Furthermore, the theory of the ‘objective
correlative’s is thus based on the assumption that every poem cannot only be
broken into its correlatives but the correlatives can be pieced together to
form a larger whole.


What Eliot may have had in mind was
that the emotions of poetry should be provided with motives, or that the
responses of the poets should be responses to a defined situation. The actions,
gestures and words of Lady Macbeth walking in her sleep arouse the same sense
of anguish in the readers as they do in Macbeth himself, and hence his words on
hearing of his wife’s death seem quite inevitable and natural under the
circumstances. This is also the case with the anguish of Othello. This is so
because the external action and situation are quite adequate for the internal
emotion. But this is not so in Hamlet. There is no object, character,
situation or incident which adequately expresses the inner anguish of the
Prince of Denmark. His suffering is terrible, but the full intensity of his horror at his mother’s guilt is not conveyed by any character or action in the play. He suffers terribly, but his suffering is far in excess to the character
and situation as presented in the play. A similar situation in real life would
not arouse equally intense emotion in normally constituted people. Shakespeare
wanted to convey something inexpressibly horrible but the character of Gertrude
and the whole plot of the play is inadequate for the purpose. In other words,
Shakespeare has failed to find a suitable ‘Objective Co-relative‘ for the
emotion he wanted to convey. Herein lies the real source of the artistic
failure of Hamlet.


Different critics have explained the
phrase ‘objective correlative‘ in different ways. For Cleanth Brooks,
‘objective correlative’ means “organic metaphor”, for Sister Mary
Cleophas Costello “the intensity of meaning-structure”. Eliseo Vivas
takes it as a vehicle of expression for the poet’s emotion; Allan Austin treats
it as the poetic content to be conveyed by verbal expression. Such diversity of
opinion does not necessarily reflect confusion on the part of Eliot. Instead,
it testifies most eloquently to the varied interests and concerns of his
commentators and the variety of principles which they had introduced for the
purposes of interpretation, refutation, or approval.


Eliot‘s theory of the objective
correlative reminds us of Aristotle as well as the French symbolists. Like
Aristotle, Eliot is of the opinion that it is not the business of the poet to
‘say’ but to ‘show’, not to present but to represent. In other words, Eliot’s
concept of the objective correlative is based on the notion that it is not the
business of the poet to present his emotions directly but rather to represent
them indirectly through the ‘objective correlative’ which become the formula
for the poet’s original emotions. One of the reasons why Eliot admires Dante’s
poetry is that Dante’s was ‘a visual imagination,’ because he attempted ‘to
make us see what he saw,’ because he did not lose his grasp over ‘the objective
correlative.’


Eliot had learnt from the French
symbolists that emotion can only be evoked; it cannot be expressed directly.
Mallarme contended that poetry is not made of ideas but of words, and explored
the potentialities of words as modes of evocative suggestion. Eliot’s theory
was also anticipated by Ezra Pound in “The Spirit of Romance.” Pound
admitted that in the ideographic process of using material images to suggest
immaterial relations, the poet has to be as impersonal, as the scientist:
“Poetry is a sort of inspired mathematics, which gives us equations, not
for abstract figures, triangles, spheres and the like, but equations for the
human emotion.” In Pound’s phrase “equations for the human
emotion,” we find Eliot’s objective or relative foreshadowed.


The theory of the ‘objective
correlative‘ is also a continuation of the views of the Imagists. As Eliot
himself explains in his Introduction to the Selected Poems by Marianne
Moore, ‘the aim of imagism….was to induce i peculiar concentration upon
something visual, and to set in motion an expanding succession of concentric
feelings.’ Thus the ideas of the Imagists are similar to those of Eliot
contained in his theory of the ‘objective correlative‘; it is not the poet’s
aim to set in motion his original emotion but ‘to induce a peculiar
concentration upon something visual’.


The basic idea in Eliot’s theory of the
‘objective correlative‘, that the emotions in poetry are embodied in an object,
owes much to the romantics. For example, Coleridge points out ‘that images
however beautiful, though faithfully copied from nature…do not of themselves
characterize the poet. They become proofs of original genius only as far as
they are modified by predominant passion, or by associated thoughts or images
awakened by that passion.” Wordsworth also says much the same thing when
he says ‘that poetry proceeds from the soul of man, communicating its creative
energies to the images of the external world’. In the Victorian Age, Ruskin
elaborated the idea further when he pointed out that great poets represent the
object as it is, the same time conveying their emotion. In the twentieth
century both Hulme and Pound expounded the theory that the poet should choose
something external to represent his emotions, and they stressed the need for
accuracy and concreteness of the object that would be symbolic expression of
the emotions of the poet.


The prudence of the
greatest poet….. matches every thought or act by its correlative.


Although the idea contained in the
doctrine of the objective correlative is traceable to a number of critics,
there is no doubt that Eliot gave to the phrase its unique currency and elaborate
interpretation. The phrase ‘objective correlative‘ has become the recognised
term to signify the way emotion is expressed through a work of art.


Eliot’s theory of the objective
correlative has been criticized by Eliseo Vivas on two grounds. First, Eliot’s
view implies that the artist knows in advance the particular emotion for which
he makes object, a situation or an event, the correlative. Eliseo Vivas
advances the hypothesis that it is only through the act of composition, through
his efforts to formulate it in words that the poet discovers his emotion. As
such he cannot have advance knowledge of the particular emotion for which an
object is made the co-relative. Secondly, the emotion expressed in a poem can neither
be of exclusive interest to the reader, nor can he feel exactly the same
emotion as the poet did. Furthermore, Eliot’s criticism of Hamlet as
‘an artistic f lure’ has been refuted by a great majority of scholars. However,
his theory of objective correlative applies well to his own poetry.
[email protected]~~~~~