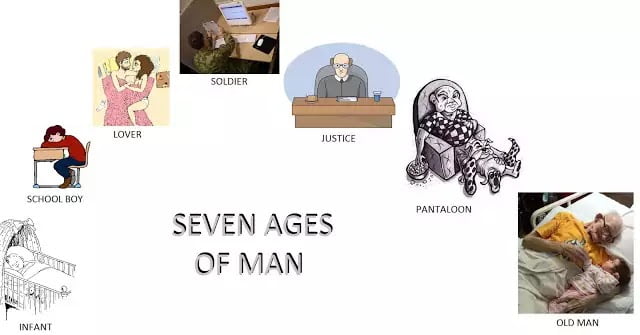 Shakespeare is a high critic of life and literature. This poem, “Seven Ages of Man” is a part of the monologue of Jacques in Shakespeare’s As You Like It (2. 7. 139-167). The poet comprehends that the stage is set by the Ultimate Creator, God and we are mere puppets out to act our roles out as directed by Him. Their exits and entrances are ‘stage-managed’ or predetermined. A man generally plays seven typical parts.

In the first stage, a helpless baby is just crying, throwing up and vomiting in the mother’s lap. Mother nurses him all the time.

In the second stage, he begins to go to school. He is reluctant to go there. It seems prison house to him. He moves likes a snail unawares of the blessings he is attributed with. He is afraid of what the world holds in store for him.

In the third stage, he is grown into his late teens and his main interest is girls. He is likely to make a bit of a fool of himself with them. He is sentimental, sighing and writing poems to his dream girls. Though frustrated, he seeks pleasures in his woes.

In the fourth stage, he is a bold and fearless soldier. He wants to take the world by storm, full of promises. He thinks less of himself and begins to think more of others. He is very easily aroused and is hot headed. He seeks a bubble reputation.

The fifth stage is the age of justice, a middle aged person. He becomes wise and experienced. His belly is round because of fat.  He had a beard of formal cut, to give professional look.  He enjoys prosperity and social status. He becomes very attentive of his looks. He begins to enjoy the finer things of life.

In the sixth stage, He begins to lose his charm — both physical and mental. He becomes lean and pale. He puts glasses on his nose. He wears pantaloon and slippers. He carries pouch of tobacco in his pocket. The world is too wide for him now. His manly voice ‘mellows’ into a childish treble.

In the final stage, he loses his status and he becomes a non-entity. This is the winter season of human life. This is the stage of second childhood. He has lost his teeth, his eye sight, even all the essence of his life. He lives in a state of utter forgetfulness. Nature tries to cut him off from all earthly bondage. Death summons him to go to the eternal world. Finally he meets his catastrophe.