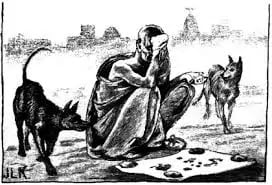 Humanism is a realistic philosophy. Humanism is the philosophy for those in love with life. Humanists take responsibility for their own lives and relish the adventure of being part of new discoveries seeking new knowledge and exploring new options. A humanist is a pragmatist who gives supreme priority to equal opportunity, justice, welfare, and progress for all without discrimination and prejudice.

Mulk Raj Anand occupies one of the topmost position in Indo-Anglican literature. He belongs to a period in the history of India when the nation was struggling hard to shake off the burden of slavery. He is a novelist with a missionary zeal. He frankly declares that art is a means towards social reforms and upliaftment. “Anand’s central pre-occupation” says Dr. K. K. Sharma “is humanism. Anand regards art and literature- as the instrument of humanism.”

Anand’s humanism has been the inspiration and the driving force behind the writing of the novels. His father served in the Indian Army. As a child Anand had mixed freely with the children of the sweeper and under-castes attached to his father’s regiment. These early playmates became the characters of his novels. Besides Anand got the inspiration from Gandhiji’s sympathetic treatment for the Harijans. The philosophy of Marx developed a great change in Anand’s heart during his stay in London.

His all novels like Untouchable, Coolie, Two Leaves and a Bud, Across the Black Waters, The Sword and the Sickle  embrace human experiences and convey a sense of life and character like a coloured glass. He has literally immersed into the flowing, vibrant core of humanity and he feels its grief to the very marrow of his bones. Being a humanist, Anand has skillfully depicted the Indian society which is hostile and callous to the lots of the low-born.

His first novel, Untouchable is an account of a day in the life of its protagonist- Bakha, an untouchable sweeper boy. It delineates the feelings, aspirations and problems of this sweeper boy who undergoes a lot of hardship being a low-caste within Indian society. To comment on Bakha, who is the pariah protagonist of the novel, namely “They think we are mere dirt because we clean their dirt” sums up Anand’s understanding of the grim realities of India’s social life.

The evil of untouchability in India has an ancient history. It roots from the four groups of Hindu castes- Brahmins, Kshatriyas, Vaishya, and Sudras. The Sudras represents the lowest of all in the social hierarchy. Untouchable is the story of this prolonged indignity and humiliation of this class of society. The opening of the novel strikes the keynote of the theme of the novel:

“The outcastes’ colony was a group of mud- walled houses that clustered together in two rows, under the shadow both of the town and the cantonment, but outside boundaries and separate from them.”

This novel revolves round Bakha who is a sweeper boy. The author has chosen a conspicuous day from his life and through the presentation of the situation occurring on that particular day, he has drawn our attention towards the plight of low caste people. First situation is the pollution through touch of a caste Hindu. It creates a catastrophe. As Bakha walks along the road eating ‘Jalebi’ and recalling the arrangement he has made for learning English, his gaze is drawn to a woman sitting in a window. He is so deeply lost in his thoughts that he has accidently touched someone passing by. Suddenly he hears,

“keep to the side of the road, o he low-caste vermin… why don’t you call, you swine and announce your approach: Do you know you have touched me and defiled me, you cock- eyed son of a bow- legged scorpion: now I will have to go and take a bath to purify myself.”

Bakha is apparently seized with fear, humility and servility. Bakha now realizes his social status and moral barrier which he himself is unable to break down.

The second major situation in the novel is when Bakha’s sister Sohini is molested by the priest. Ironically Anand makes us realize that hue and cry is raised against the molested and not the molester. Sohini raises an alarm to save herself from being molested by the priest Kali Nath but the priest is very clever and extricates himself from the difficult situation by shouting, “Polluted, Polluted.” The writer here draws our attention towards the unjust and condemnable behaviour of the so called high caste people who can easily go scotfree by turning the blame on to the suffering, sexually exploited girl. Bakha knows the truth of the whole thing that he finds himself incapable of taking revenge.

As a humanist, he believes that man can solve the problem by universal brotherhood love and compassion. Even though the high caste Hindus considered him only as an untouchable, there are also good fellows life Havildar Chart Singh, who gives much love and consideration to him. The Tommies also treated him like a human being, while to the caste Hindu, he is untouchable. Prof. S.Laxmana Murthy quotes the words of Anand that, “the tragedy of my hero (Bakha) lay in the fact that he was never allowed to attain anything near the potential of his qualities of manhood”

Bakha’s world is much too narrow for his aspirations. So he longs for a new world. Anand in the conclusion of Untouchable subtly examines the various possible solutions religious conversion, rapid industrialization and the Gandhian way. The emphasis on the Hutchinson’s religion is on sin, love and equality of birth where as it is on cleanliness, morality and dignity of work in Gandhi’s approach to the problem of the emancipation of the untouchables. Of these, Bakha likes only the idea of cleanliness and equality but he feels flattered by Gandhi’s sympathy. It is only the third solution offered by the poet, Iqbal Nath Sarshar that engages Bakha’s attention- the flush system.

Anand, through his rare excellency, bold experimentation and aesthetic sensibility has made immense contribution to Indian as well as World literature in English. His choice of unconventional subjects and characters has been determined by his Dickensian humanistic philosophy. This novel Untouchable expresses his belief in the dictum ‘man is the measure of all things’.