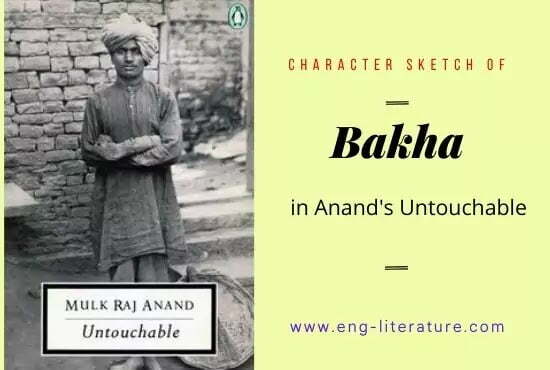 Character sketch of Bakha from Untouchable

Bakha is the central character in the novel. The novel revolves around his character. Everything is viewed from his point of view. He is a focused character and cynosure. Bakha is a youngman of eighteen, strong and able bodied, the son of Lakha. His father is the Jamadar of all the sweepers in the town and the cantonment, and officially in charge of three rows of public latrines. Bakha is not simply an individual outcaste rather he represents the entire community of the outcaste treated as untouchables and subjected to live most miserably.

He is healthy both physically and mentally. Anand writes “Each muscle of his body, hard as a rock when it came into play, seemed to shine forth like glass. He must have had immense pent-up resources lying deep in his body…”

Bakha is fearless and frank. He is distinguished from ordinary scavenger because of his sensitivity, consciousness and self respect. His extraordinary tolerance and humility betray this divinity. As E.M. Foster writes in the Preface,

“Bakha is an individual, lovable, thwarted, sometimes grand sometimes weak, and thoroughly Indian. He is an admirable character. He is marked for his fortitude, tolerance, humility, self-respect and broad vision.”

We admire his sense of self-respect and nobility. Mulk Raj Anand writes “What a dextrous workman! the looker would have said.” Although his job was dirty he remained comparatively clean. He didn’t even soil his sleeves handling the commodes, sweeping and scrubbing them. “Bakha is a member of social pariah. He suffers beyond limitation.” He suffers the humiliation and tyranny which he does not deserve. He is conscious of the evils of casteism. He is revengeful. He can revolt against the caste system, tradition and hackneyed rituals. But he cannot fight against the dominant, powerful caste Hindus. Bakha’s situation is that of a tiger at bay’. We appreciate Bakha for his extra ordinary zeal, courage and broad vision of a morning of freedom and equality.

Bakha : His Passion for Fashion and Modernity

Mulk Raj Anand portrays Bakha’s passion for fashion and modernity. He has a mania for English clothes and he obtains them from Tommies. For this reason Chota and Ram Charan, other outcaste boys in the colony call him jokingly as “Pilpali Saheb”. He smokes Red Camp cigarette and sips tea without blowing it cold.

Twice Bakha thinks of retaliation : Once when he is slapped by a caste Hindu and later when his sister is molested by a priest. As such moments he appears, we are told. “Superb specimen of humanity”, his fine form “rising as a tiger at bay”. The instinctive anger gives way and the slave in him asserts itself.

The coalescence of paradoxical attributes in his character gives thrust to a dual personality. There are two paradoxical aspects of his character. The first aspect reveals that he surrenders and submits himself to the superiority of the high caste Hindus. He has inherited such traits as a result of thousand years of subjugation. The second aspect of his character is that he has smouldering revenge and vengeance. His spirit of revolt urges him to be an open rebel of caste-ridden society.

Bakha is born in an outcaste family. He was nurtured in the atmosphere of slavery. But he does not accept his life and profession as his inevitable destiny. He always keeps his self-dignity up. But his father, Lakha has submitted himself to the inevitable destiny. Bakha has a sense of civility but Lakha is uncouth and unclean.

The ultimate and most violent realizatiom comes when his sister, Sohini’s chastity and modesty is molested by a caste Hindu priest, Pandit Kalinath. He becomes revengeful and wants to kill the debauche. But he is helpless when he feels his limitations. He yields to tradition and kisses the defeat. He has developed a tendency to digest insult. He loves the modesty of his sister more than anything else but is unable to transform his anguish and anger into action.

Bakha is not an inert character. He is active and aggressive by temperament. His anglophile behavior suggests that he is undergoing a transition from tradition to modernity. He is an iconoclast at the bottom of his heart.

In brief, Anand has given us one of the immortal characters of literature. The novelist has projected profound psychological insight in the portrayal of Bakha. He is aware and conscious of the social discrimination and injustice. He has the elements of revolt and protest but he has inherited servility of being an underdog of the society. Bakha is also a human being. He has the same blood in his veins as others. If we co-operate with Bakha, he can rise to great heights.