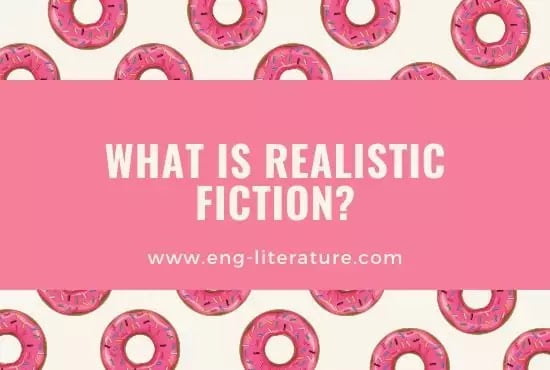 What is Realistic Fiction?

Realism is an aesthetic mode which broke with the classical demands of art to show life as it should be in order to show life “as it is.” The work of realistic art and realistic fiction tends to eschew the elevated subject matter of tragedy in favour of the quotidian, the average, the commonplace, the middle classes and their daily struggles with the mean verities of everyday existence—these are the typical subject matters of realism.

The attempt, however, to render life as it is, to use language as a kind of undistorting mirror of, or perfectly transparent window to the ‘real’ is fraught with contradictions, Realism in this simplified sense must assume a one-to-one relationship between the signifier (the word, tree for example) and the thing it represents the actual arboreal object typically found in forests). Realism must, in effect, disguise its own status as artifice, must try and force language into transparency through an appeal to our ideologically constructed sense of the reader must be addressed in such a way that he or she is always, in way, saving. “Yes. That’s it, that’s how it really is.”

Realism can never fully offer up the world in all its complexity, its irreducible plentitude. Its verisimilitude is an effect achieved through the deployment of certain literary and ideological conventions which have been invested with a kind of truth value. The use of an omniscient narrator who gives us access to a character’s thoughts, feelings and motivations, for example, is a highly formalized convention that produces a sense of psychological depth, the characters seem to have ‘lives’ independent of the text itself. They, of course, do not: the sense that they do is achieved entirely by the fact that both the author and the reader share these codes of the real. The consensual nature of such codes is so deep that we forget that we are in the presence of fiction. As Terry Eagleton notes, the sign as ‘reflection,’ ‘expression’ or ‘representation denies the productive character of language: it suppresses the fact that what we only have a ‘world’ at all because we have language to signify it.

The realist fiction first developed in the nineteenth century and is the form we associate with the work of writers such as Austen, Balzac, George Eliot and Tolstoy. According to Barthes, the narrative or plot of a realist fiction is structured around an opening enigma which throws the conventional cultural and signifying practices into disarray.

In a detective novel, for example, the opening enigma is usually a murder, or a theft. The event throws the world into a paranoid state of suspicion; the reader and the protagonist can no longer trust anyone because signs people, objects, words no longer have the obvious meaning they had before the event. But the story must move inevitably towards closure, which in the realist fiction involves some dissolution or resolution of the enigma: the murderer is caught, the case is solved, the hero marries the girl.

The realist fiction drives toward the final re-establishment of harmony and thus re-assures the reader that the value system of signs and cultural practices which he or she shares with the author is not in danger. The political affiliation of the realist novel is thus evident; in trying to show us the world as it is, it often reaffirms, in the last instance, the way things are.

As Catherine Belscy notes, classic realism is “still the dominant popular mode in literature, film, and television drama”. It has been denounced as the crudest form of the readerly text, and its conventions subverted and parodied by the modern fiction, the new fiction and postmodern fiction. However, the form, like the capitalist mode of production with which it is historically coincident, has shown remarkable resiliency. It will no doubt continue to function, if only antithetically, as one of the chief influences on the development of hypertext fiction.