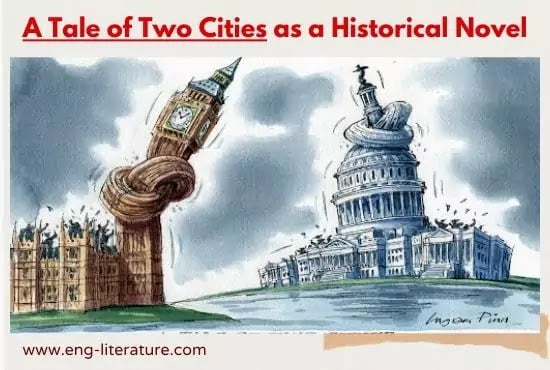 A Tale of Two Cities as a Historical Novel

A Tale of Two Cities is a historical novel related to the period before and all through the French Revolution. In the French Revolution Dickens found a subject commendable of his broadest vision to ponder upon; a great nation ripening its own annihilation – literally France, of course, but by interference England too, and any other nation embedded feudal privileges with their inherit abuses. Dickens has condensed the basic threat of the Revolution and the basic lesson that can be drawn from it by depicting the terror, or the revengeful side of the Revolution, on small group of people who get involved in these public events against their will.

The novel opens with an exact description of that time. The novelist says-

This novel takes place in England and France in 1775. And that time is noted as the age of wisdom and foolishness, epoch of belief and incredulity. Even the novelist marks that time as the season of light and Darkness, as the spring of hope and winter of despair. Both in England and France, the poor were oppressed by the aristocrat. The conflict of religion and science made England so ferocious. The pope or priest wanted to dominate the poor and show their cruelty. On the other hand, In France, the poor were exploited by the aristocrat.

As a historical novel, A Tale of Two Cities has obvious limitations. It attempts no really panoramic view of either the English or the French political world during those critical years (1775-1793). Dickens in his A Tale of Two Cities depicts the beginning of popular discontent in France, the rising dissatisfaction of the people with members of the privileged classes, the turmoil caused by public fury, and the excesses and barbarities committed by the revolutionaries during the years.

Dickens takes no notice of the leading historical personalities of the French Revolution, such as Mirabeau, Lafayette, Robespierre, and Napoleon nor does he show the struggles of the government for money in time of depression. Dickens’ main concern was to show the extreme injustice leads to violence, and violence then leads to inhuman cruelty as shown by the Reign of Terror in France. Dickens sympathizes with the poor and downtrodden people but the in the end these very people become the villains who therefore repel him.

The infamous Evremonde family shows their cruelty in France. The Marquis, one of the members of the family, imposes heavy taxes on the poor villagers and so the poor suffer a lot to pay their taxes.

As a cruel man, Marquis Evermonde shows his cruelty by killing a child on the street. He pays a gold coin to the father of child and looks at him with disgust. The Evremonde brothers give Dr. Manette eighteen years imprisonment for his honesty and responsibility, but later, Gaspard, the father of child, kills Marquis Evremonde for taking revenge. Thus the Evremonde family is portrayed in the novel as an aristocrat family of the France.

The Bastille, a prison in France, plays exigent role in the novel. The French aristocrat imprisoned the poor in the Bastille who tried to raise their voice against the oppression in the France. So under the leadership of Madam Defarge and her husband, twenty five thousand people attacked the Bastille at first on 14 July 1789. In order to defend the Bastille, governor of the Bastille ordered the soldiers to shoot the crowd. Then the crowd seized him and brought him to the Defarges. Madam Defarge shows her extreme violence. She put her foot on the neck of the governor and cut off his head with her knife.

A Tale of Two Cities, the novelist depicts the furiousness prevailing in France at the time of the revolution.

Dickens portrays the picture of blood thirsty revolutionaries and sends a message to the world that oppression is not a way to seek peace and happiness. French revolution is an example of it. Thus, A Tale of Two Cities becomes so famous in the world for its historical touch.