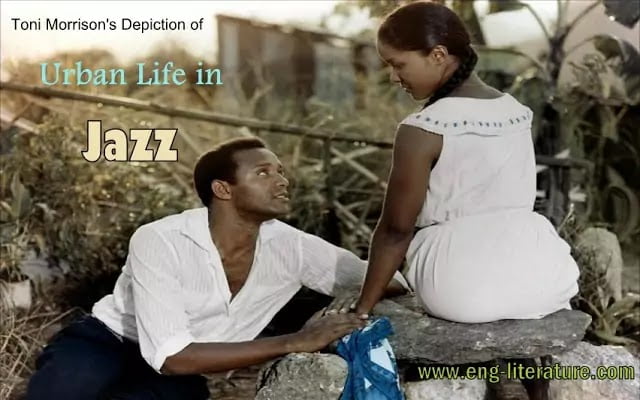 The fictional representation of the American city African American literature is often characterized by a stark manifestation of its hierarchical colour division. Interestingly, African American novels are replete with images of post-bellum migration to the city and the ghettozation of the “nigger.” Toni Morrison’s Jazz powerfully captures a vision of an urban locale in which racial spaces are viscerally demarcated for the blacks through long conditioning, though in reality no physical marker separates the white and black worlds. Such a traumatic awareness of their pariah status makes the blacks in Morrison’s Jazz perpetually reposition themselves.

This constitution of difference evidently replicates throughout the cityscape where both race and class create their respective unique spaces. These factors perhaps compel critics like Anne-Marie-Paquet-Deyris to view in the city an inimical force that denatures the Black communal voice: “As a new composite, the City is conditioned by the Great Migration from the rural South which started in the 1870s and climaxed between 1910 and 1930. Whatever traces of this former history survive in the text remain fragmentary or else unarticulated. They sometimes even lead to literal dead ends” (African American Review, Summer 2001). This perspective assumes that the displacement necessitated by the northward migration has resulted in an irreparable loss of the community’s historical narratives.

Deyris’s take is problematic because there is nothing to warrant the assumption that the community invested unstintingly in a consolidated historical voice prior to the urban relocation. Whatever was lost owing to the migration to the city had been more than compensated by the enormous opportunities it offered for liberal engagement with black individualism and collective group action, as has been superbly delineated in Morrison’s Jazz. Particularly for the black woman, this relocation to the urban centre was a proven blessing in that they no longer were confined to the domestic space or whatever socio-cultural environment was assigned to them.

Violet has a high degree of professional mobility within the contours of black space. Ironically, it is Joe, the former master woodsman in Vesper County, who is reduced to a salesman of cosmetics in the city. The black women in the novel through continual engagement with their surroundings display sensitivity to the urban cartography. Delimiting such territory contributes to a simultaneous creation of a personal environment which facilitates a smooth transition to the social life of the city.

It cannot be denied, however, that no matter how liberating such spaces turn out to be, a sense of fear haunts the avenues of action available to the black people. The insertion of an additional ‘n’ that bizarrely transforms Violet’s name to the sobriquet “Violent” ironically touches upon the primeval drive for survival. Nevertheless, the availability of such linguistic play bespeaks a luxury hardly possible in the pre-urban time frame. Further, such a creative possibility ties in meaningfully with the shift in signification, later, from “Sth” to “Sweetheart” which is richly evocative of a mood of fruition and fulfillment that was woefully absent prior to the transitional phase marked by the text.

The sheer ebullience of the narrative in Jazz then significantly attests to the intellectual mobility of the community itself. In having Dorcas fall prey to her own whims and venalities the novel subtly underwrites the endurance and invincibility of the matriarchal vision that sustains the black narrative. Violet serves the role of a cultural link bridging the Past of the community in the country with the present in the City, as it were, and appropriately she even exhorts Felice to “make [the world] up the way you want it to [be]”. It is amply clear from the text that these communal narratives both sustain and empower the beleaguered black population through the transition phase. The colour division has ironically helped evolved a space and culture in the city that is uniquely and vociferously black.

Of course, the mushrooming of several interest groups and associations later such as the National Negro Business League and the Civic Daughters forum point to the project of consciousness raising that is already underway. And the possibility of the central narrative voice being gender-neutral is unmistakably belied by the intimate access this voice has to spaces such as the Salem Women’s Club. These associations with their palpable presence in the narrative signify discourses that clearly reject stereotypical notions of the Negro as being regressive.

Thus, Morrison’s Jazz forcefully registers the nascent stirrings of group action at a certain historical moment, which though not politically strident, hold out the possibility of exploding into an organized revolt against the hegemonic forces.