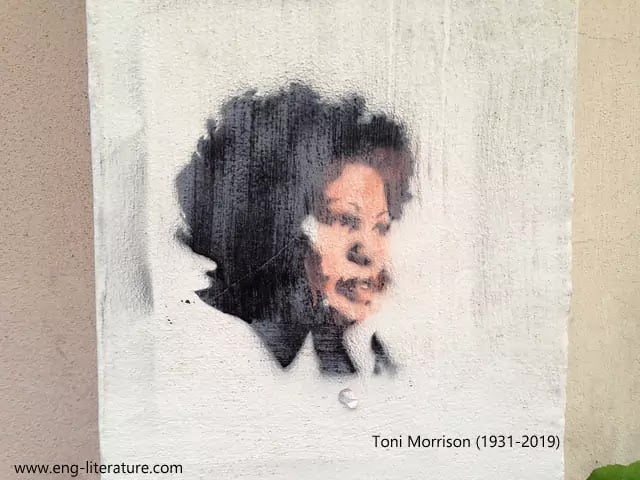 “I know the world is bruised and bleeding, and though it is important not to ignore its pain, it is also critical to refuse to succumb to its malevolence. Like failure, chaos contains information that can lead to knowledge – even wisdom. Like art.”

Feminism has political and cultural connotations. Different waves of feminism over the centuries have endeavoured to liberate women and to carve a place for women in society. Several novelists, especially the novelists of New Literatures portray the realistic picture of women. Toni Morrison, a Nobel Prize winner of first black woman not only reached the peak of literary veneration, but also wrote thematically arresting and emotionally moving novels. The Bluest Eye (1970) the first novel remains one of the best. Being a multi-faceted woman, she was awarded the Pulitzer Prize for her novel, Beloved. The author of this article traverses through her novels. The Bluest Eye (1970), Sula (1973), Song of Solomon (1977), Tar Baby (1981), Beloved (1987) Love (2003) and A Mercy (2008) to explore how Toni Morrison depicted feminism.

The works of Toni Morrison present a conglomeration of different themes; however, the overarching thematic concern throughout her oeuvre is with issues of African, American female identity in the contemporary world. Her novels offer complex examinations of problems within the African American community, power dynamics between men and women, and issues of racism in relations between black and while America.

Morrison’s primary interest lies with the experience of African-American women, whose quests for individual identity are integrally intertwined with their community and their cultural history. Her fictions are self- consciously concerned with myth, legend, storytelling, and the oral tradition, as well as with memory, history, and historiography, and have thus been recognized as postmodern meta-narratives.

The scan for an autonomous, incorporated personality has been the leitmotif in progress of African-American essayists. This journey is yearning for a home and wholeness and is demonstrative of an intense want of black community for self-ID and self-actualization.

In the community and also in the field of writing, black women stay unidentified as wise, smart, splendid, receptive, or more all imaginative. To add to the most noticeably bad, because of the overwhelming effect of bigotry and sexism, the general public even declined to acknowledge them as people. As black individuals, they were not perceived by the white. As women additionally they needed to confront antagonistic vibe from black men. Gerda Lemer keeps up:

“Belonging as they do to two groups, which have traditionally been treated as inferiors by American society-Blacks and Women-they have been doubly invisible. Their records he buried, unread, infrequently noticed and even more seldom interpreted”  (Black Women in white America  xvii-xviii).

Before Morrison we find no female author who had depicted the issues concerning Afro-American community so avidly. After Morrison many writers tried their skill in this arena and some of the authors that came to the limelight under her stewardship were Alice walker, Gayle Jones, Gloria Naylor, and Toni Cade Bambara. Continuing to use Morrison as a guide, African-American female authors have emerged as a consistent and critical dimension in literature.

In a 1994 interview with Time magazine, Morrison understands the significance of her work for female authors.

“I felt I represented a whole world of women who either were: silenced or who had never received the imprimatur of the established literary world. …Seeing me up there might encourage them to write one of those books I’m desperate to reads”.

Before Morrison, the most successful African- American writers were males. For example, the work of acclaimed African American novelist and essayist James Baldwin had tremendous literary impact in the fifties and sixties. Racial themes were explored as they had never been before in his books Nobody Knows My Name and Go Tell It on the Mountain. Eventually, Baldwin felt uncomfortable living as a second-class citizen in the: United States and became an expatriate who lived and worked from Paris.

Richard Wright, Baldwin’s predecessor, was also an expatriate. Beginning with his autobiography Black Boy in 1945, Wright continued with Outsiders, Uncle Tom’s Children, and his most important work Native Son. Ralph Ellison wrote only one book. Yet Ellison’s Invisible Man won a National Book Award in 1952 and this allowed him to join the ranks of male authors successful at depicting the enfranchisement of the African-Americans in the United States.

Morrison is recognized as the most distinguished African-American novelist since Wright, Ellison, and Baldwin. In her work as an author, Morrison wanted to continue to broaden the perspective of American literature by telling the stories she felt were never told, stories about African-American girls and women and the racial and social pressures they faced. She wanted to write about people with the sensibilities of the culture she grew up in.

Morrison wanted her work to focus on the joys and sorrows of their lives. She wrote her first novel when she was in her 30s The Bluest Eye, published in 1970, is about a black girl who feels she has no beauty. If only her eyes were blue and her skin was white, then she could be someone who could be loved. The book received respectable attention The Bluest Eye became the first of many of Morrison’s explorations into the identity, self-esteem, and impact of racial discrimination on what she believes to be the most vulnerable – women and children.

Sula, published in 1973, shows two friends, black and female, and how they fit and don’t fit into their community. With her publication of Song of Solomon in 1977, Morrison, won critical and commercial success and the National Book Critics’ Circle Award. By the time her next novel Tar Baby was due in the bookstores in 1981, she was featured on the cover of Newsweek.

Ever expanding on the theme of telling stories untold, it is said her book Beloved was written in memory of the millions of lives lost during slavery. The plot centers round an ex-slave Sethe who would rather kill her own children than risk that they be re-enslaved. The ghost of Sethe’s dead child tries to remain close to her mother and wreaks havoc when she cannot. All of the characters in Beloved Morrison’s Pulitzer Prize winning novel try to recover from the personal and collective indignities of slavery.

“I was trying to make it a personal experience,” says Morrison in a question and answer interview with Time magazine. “The book was not about the institution—Slavery with a capital S. It was about these anonymous people called slaves. What they do to keep on, how they make a life, what they’re willing to risk, however long it lasts, in order to relate to one another — that was incredible to me,” she says.

In 1992 Morrison published Playing in the Dark, a collection other Harvard lectures. In this collection she coins a new term, once again reinventing an already established concept. She teaches humanity’s course those changes the term African-American to American Africanisms. This same year she also published Raceing Justice, En-Gendering Power, essays on the Controversy surrounding the Clarence Thomas Supreme Court confirmation hearings.

In her novel Jazz, also published in 1992, Morrison continues her theme of giving a voice to the voiceless. Once again she does everything she can to stretch the imagination. The novel makes both racial and historical statements about the inequities of life for African Americans in the post-slavery era.

Morrison has made a noteworthy appraisal by investigating, uncovering and rethinking the situation of ladies in the socio-chronicled, political and monetary setting, featuring her inert power and ability. She firmly demonstrates her lack of regard to man-centric culture which sustains distracted thought of ladies being synonymous with womb, bust and hips. Morrison’s treatment is unique in relation to others since she is focused on the dark ladies’ involvement.

The significance of women’s liberation has been reflected in the imaginative works of Morrison. The topics of affection, marriage and sex have been managed a feeling of trustworthiness remembering the different parts of social and social subtleties. The impacts of subjugation of dark ladies empowered Toni Morrison to seek after the outcomes of the devastation of the mother-kid bond on women personality. Morrison has shown productive richness in delineating the perplexing complexities of the instinctual and passionate reactions of the ladies characters in her books, particularly the mental checking of those ladies who assumed the part of moms in different circumstances under intimidation of the current conditions.