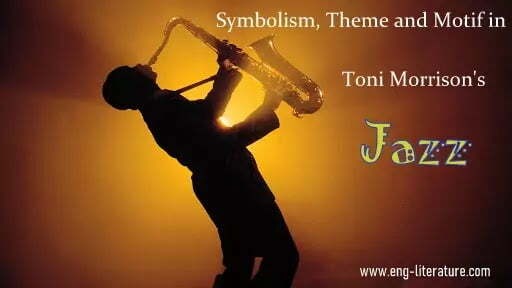 Symbolism in Jazz by Toni Morrison

Jazz is a historical novel by Pulitzer and Nobel Prize winning American author, Toni Morrison. The novel forms the second part of Morrison’s Dantesque trilogy on Africa American history, beginning with Beloved and ending with Paradise. Morrison is a modern novelist and in this novel she has presented a hoard of new themes and motifs and has made an extensive use of symbolism.

One of the main themes of the novel is violence. Jazz begins with a recap of Dorcas’s murder and Violet’s attack on her corpse. The couple that kills and then defaces the young girl seem immediately to be evil and immoral characters but surprisingly Morrison goes on to flesh them out and to explain, in part that their violent acts stem from suppressed anguish and disrupted childhoods. Morrison traces the violence of the City characters back to Virginia, where generations of enslavement and poverty tore families apart. Subtly, Morrison suggests that the black on black violence of the City carries over from the Physical and psychic violence committed against the race as a Whole. She interweaves allusions to racial violence into her story with a neutral tone that lets the historical facts speak for themselves. Further, her descriptions of scenes are often filled with violence as she discusses buildings which are cut but a razor-like line of sunlight. Even her narrative is violently constructed with stories wrenched apart, fragmented, and retold in a way that mirrors the splintered identities of the novel’s Principal characters.

Mothers are almost always absent from the lives of Morrison’s characters, having abandoned their children, died or simply disappeared. The absence of mothers also reflects the “motherland”, as the African-American community searches for a way to make America its home despite the horrors of dislocation and slavery. The mother also signifies common cultural and racial heritage that eludes the characters as they struggle to define themselves, The word “mama” rests on the tip of the characters’ tongue and is an unconscious lament for a lost home or feeling of security. During one of Violet’s visits, Alice Manfred blurts out “O Mama” and then covers her mouth, shocked at her own vulnerability. Dorcas also refers to her mother out of nowhere as she lies on her death bed. Thinking, “I know his name but Mama won’t tell,” Morrison ever-presents in the lives and history of her characters, doubles as a kind of mother on the text, tending to the community of black Harlem.

Jazz immerses its reader in the psyche and history of its African American characters. The book attempts to mirror from an anthropological and fictional standpoint, the concerns of this community and the roots of their collective search for identity. The narrator does not travel far from the self contained universe of black Harlem and does not focus on the lives of any white character, save for Vera Louise Gray, The legacy of slavery reverberates throughout the story and the influx of blacks to the City reflects a distancing from this past.

Migration is also a theme of the novel: Almost all of Morrison’s characters migrate to New York City from other parts of the country in an attempt to escape economic and social prejudice and in search of a new beginning in Harlem. The motif of migration goes hand in hand with the numerous allusions to birds and recurs frequently in the narration of the character’s histories. Malvonne’s nephews William the Younger exemplifies a constantly shifting and itinerant black population with his sudden departure from New York for “Chicago or was it San Diego, or some other city ending with O.” His restlessness indicates an inability to establish roots or a Connection in one place and echoes the “homelessness” of Morrison’s Principal characters.

Next to migration, another recurrent theme or motif of the novel is orphans. The absence of a strong parental presence in jazz ties together many of Morrison’s characters and connects their shared sadness to one cause. Raised by aunts, grandparents and adoptive parents, Violet, Joe and Dorcas all experience a feeling of displacement and feel that they are handed over with no control. Unable to Control the fact that they are orphans and placed in homes without any choice in the matter, characters are relocated in a way that resonates with the paternalistic adoption of slaves. Their true parents would be the tie to a history and would provide an identity for the characters. Thus, the lack of parents creates the characters’ sense of displacement and their obsessive desire to find a stable and complete identity.

Morrison has also made an extensive use of symbolism in this novel Symbolism is a device which enriches a work of art and imparts greater meaning to it. The most important symbol used in the novel is music. As the name of the novel implies, music operates both thematically and formally to provide structure to the book. The jazz music of the 1920s situates the narrative in a specific cultural and historical moment when a black aesthetic style was gaining ground in New Orleans and New York. Both the City and the woods of are described as having their own music and rhythm and the pace of the narrator’s storytelling ranges from upbeat fast to slow and “bluesy.” Music also speaks to the individual characters on a deep level, as when Alice Manfred worries about the sinful powers of the music.

However, music can also be restorative, as Felice facilitates the healing process between Joe and Violet by her records and watching them dance.

There are some minor symbols as well like the Red-wing birds. According to the local Virginia lore, Wild’s proximity is always indicated by the flight of red-winged birds from nearby trees. The workers in the sugar cane fields establish their own set of symbols in the natural world based on shared stories and experiences. The collective recognition of a red-wing bird as a herald of Wild’s presence illustrates the richness of a community’s bonds. Unlike Violet’s caged birds, the birds in Virginia have not lost their instinct of flight and like the woman that they shadow, they represent freedom from society’s bonds.

The green dress that passes hands from Vera Louis Gray to Joe’s mother, Wild, connects the novel’s characters and suggests the ways in which their stories intersect. A fine garment worn by the daughter of a wealthy slave owner, the dress finds its way into the rustic cabin of the girl’s black lover, Henry LesTroy. The empty shell of its absent owner, the dress represents Vera Louise’s abandonment and the social strictures that forced her to move away. However, the dress changes meaning when her son, Golden Gray, drapes it over Wild’s body, a conciliatory gesture that ultimately undoes the work of her family’s racist background. When Joe finds the tattered old dress in Wild’s hovel, the garment symbolizes the hope of healing a painfully inherited legacy.

Even the characters of the novel are symbolic in one way or the other. For example: One of the novel’s central relationships is the sustained romantic affair between Joe Trace, a fifty year old man, and Dorcas, who is in her late teens. Throughout the novel the murdered girl becomes a symbol of youth. Her aunt, Alice Manfred, identifies Dorcas’ youth with a budding sexuality that has brought calamity. The motif of the Garden of Eden presents the image of Dorcas as a young Eve who is enticed and enticing. Violet Trace’s reaction to Dorcas is similar. Her jealousy stems from her husband’s affair and she can’t help but notice the contrast between her aging, sagging body and Dorcas’ youthful, fuller figure. Violet tries to drink malts and eat multiple meals to regain the pounds other youth and her “competition” with the dead girl is ironic because Violet does not want to compete with the young, dead child; rather, she wishes that Dorcas could be the young daughter that she never had. Dorcas’ friend, Felice comes to serve this role for Violet and she also provides consolation for Joe, demonstrating a healthier way in which “youth” can sustain “age” without bloodshed.

In conclusion, we can say that with the writing of Jazz, Morrison takes on new tasks and new risks. Jazz, for example, does not fit the classical novel format in terms of design, sentence structure, or narration. Just like the music this novel is named after, the work is improvisational. In this work she is influenced not only by the Jazz, blues and gospel music she was reared on, but also by the folklore, tall tales and ghost stories that her family told for entertainment. The result is a writing style that has a unique mix of the musical, the magical and the historical.