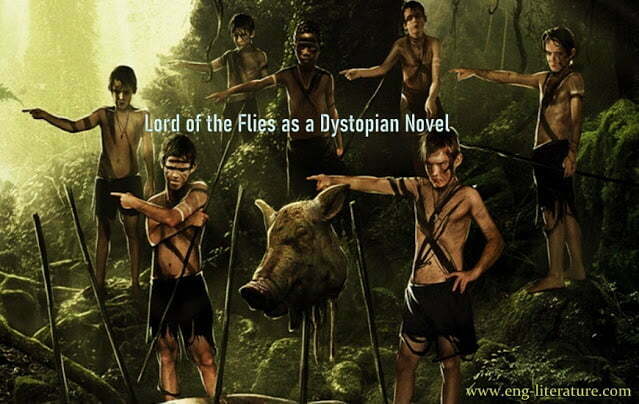 Lord of the Flies as a Dystopian Novel

According to M.H. Abrams, the term dystopia

“has recently come to be applied to works of fiction, including science fiction, that represent a very unpleasant imaginary world in which ominous tendencies of our present social, political, and technological order are projected into a disastrous future culmination”.

This definition can be applied to William Golding’s Lord of the Flies. His boys are plane-wrecked on an unknown desert island. They are completely isolated and free without any external influences and elderly supervision. At first they enjoy their newly acquired liberty. Golding shows how human’s inherent tendency towards evil and aggression progresses gradually as he frees himself from constraints of civilized life and conditions him to regress into a state of dystopian savagery.

After the plane crash the boys “find an earthly paradise, a world in fact like our own, of boundless wealth, beauty and resource” (Woodward 209). In this world of plenty the boys have a unique opportunity to start a new society. At first they revel in their freedom from the authority of the adults. It seems that the island has the potential to become a world of never ending fun, similar to the “Neverland” in James Barrie’s Peter Pan. However, the boys’ high spirits do not last for long. The dangers of the fusion of fantasy and reality start surfacing. Fear of an unseen beast spreads like plague among the boys, particularly the “littluns.” It consumes them all and culminates in a mad hysteria and a deep rift between the boys. The “good island” turns bad and a potential utopia turns into a definite dystopia (Golding, Lord 26).

Things do not function the way they imagined. They cannot organise themselves well enough to build proper huts. Jack’s boys lack responsibility and let the signal fire die in order to go hunting, thus missing an opportunity to be rescued. This is the beginning of the disintegration of the boys. Some boys are overtly hostile to others, such as Roger, the bully who barely refrains himself from stoning Henry, one of the smaller boys. However, the grip of civilization will soon slacken and there will be nothing to prevent Roger from committing murder. Hostility among the boys is best shown on the example of Jack’s behaviour towards Piggy. This boy never gets the chance to say his real name, but is constantly referred to by the hateful nickname. The short-sighted fat boy with asthma and a balding head is constantly derided and insulted despite his intellectual abilities.

The initial juvenile utopian fun is disrupted by forces coming from the adult world. In order to survive and be rescued all boys must act with responsibility. First they try to arrange a sort of democratic society modelled on the principles of the world of adults. They have elections whereby Ralph is voted chief. However, the choir boys remain under Jack’s command and he decides that they will assume the role of hunters. They organise assemblies by Ralph blowing the conch and summoning all the boys. Every boy is given the right to speak provided that he is holding the conch. Nonetheless, this democratic idyll soon turns upside down, with Jack crying “Bollocks to the rules!” (Ibid 79).

When confronted with the fear of the Beast Piggy’s reason loses the battle and the democracy starts to crumble. He believes that the world is reasonable, yet reason cannot control the boys’ instinctive violence. Piggy fails to understand the reality of the Beast. He may have the brains, but the savage, violent, beastly evil in Roger makes those brains useless when he smashes Piggy’s skull while he is embracing the conch, their symbol of democracy.

The idea of feasting is important in Golding’s novel as a symbol of greed and one of the benefits offered by Jack and his gang of hunters. The boys who revert to savagery put hunting and feasting before the signal fire and possibility of rescue. This is evident when Jack sticks a pig’s head on a double-pointed spear as an offering to the Beast. The “Lord” from the title of the novel is nothing but a pig’s head on a stick, a lord only to flies gathering on it, symbolising the reversal of hierarchy and authority. Yet on the other hand, the “Lord of the Flies” may be interpreted as the Devil, or Beelzebub, the “Lord” of the human inherent evil, which got the upper hand on this island. Therefore, this symbol is fitting both to the “dystopian misrule of carnival” in the novel and to the etymological base of Lord of the Flies referring to Beelzebub or Devil (Crawford 67).

Furthermore, Golding’s dystopian representation of carnival may be interpreted as a political fable. Even though Ralph and Piggy possess good will and judgment, they are politically inadequate. Ralph needs constant reminders of his tasks and goals as a chief. Moreover, they both participate in the feast and the frantic ritual dance during which Simon is murdered in the mock-hunt. There is the contrast and tension between Ralph’s and Piggy’s peaceful liberal democracy and Jack’s totalitarianism based on violence and oppression reflecting the carnival crowd behaviour. Golding refers to this issue in his essay “On the Work as a Fable,” saying that after the Second World War he lost his faith in “the perfectibility of social man”.

For Golding “Man is born in sin. Set him free and he will be a sinner”. Therefore, since humans are not innately innocent their progress is unlikely. The violence of the boys is only a miniature manifestation of what is happening on a large scale in the world of adults. The sinfulness of the world is obvious in the references to nuclear war and atrocities committed by men to other men. In Lord of the Flies William Golding conducts a literary social experiment showing how humans conditioned by the primeval evil, spoil their chance of a new beginning and create a savage dystopian society. If we observe the world as a set of concentric circles, then the boys’ island world is a smaller circle mirroring a larger one. Their microcosmic dystopia reflects the violent events occurring in the world of adults.