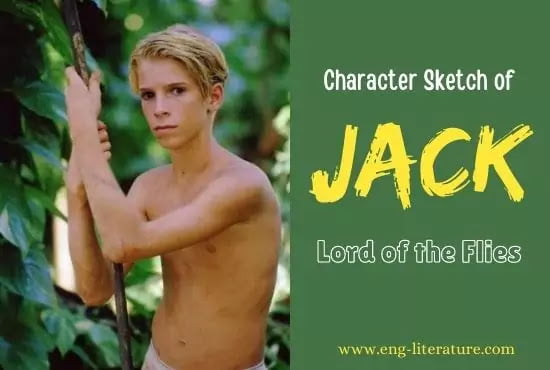 Jack from Lord of the Flies

Jack Merridew, in William Golding’s Lord of the Flies, is the antagonist. The iron-willed, egocentric Jack symbolizes savage instinct, violence and the desire for power. In one word he is the antithesis of Ralph. At the very onset of the novel, power thirsty Jack wants to dominate and lead the boys in the island. He is thus, the representative of totalitarianism as does not appreciate the results of the election. In his lust for power, he eventually using his strength, his aggressiveness and his choirboy militia seizes power in a coup and rules alone, making himself chief and the other boys his tribe.

“…tall, thin, and bony; and his hair was red beneath the black cap. His face was crumpled and freckled, and ugly without silliness. Out of his face stared two light blue eyes, frustrated now, and turning, or ready to turn with anger.”

Jack is the representative of that anarchic instinct of man which remains dormant under the mask of civilization but resurfaces whenever opportunity occurs. Jack may also represent the ‘ld’ in contrast to Ralph as the ego and Piggy as the superego. The logic behind this is that Jack seeks to immediately satisfy the needs and act on instinct, fulfilling the description of the ego, while Ralph upholds the social norms of the superego.

Jack has as overwhelming urge to lead because he is confident, fluent, arrogant and inconsiderate of others. He is a narcissist. Simon‘s faints do not move him, he has no concern for littluns and says that if there were shortage of pigs, they would have to kill a littlun. He is irresponsible as he lets the fire go out, while he indulges in pig-hunting. He is incapable of rational thought like Ralph. He is very narrow-minded as he moves in the little society of his own making.

His urge to lead and assert deteriorates into lust for hunting. Like Satan of Paradise Lost his character moves towards degeneration through stages. Previously, Jack holds the sense of morality that society instilled in him. In fact, in school; he was the leader of the choirboy. When he encounters a pig for the first time, he is unable to kill it. But Jack soon becomes obsessed with hunting and devotes himself to the task, painting his face like a barbarian and giving himself over to bloodlust. Throughout the novel there is constant reference to his eyes as “mad”, “bolting”, “opaque”. This produces a feeling of revulsion, showing that he is not normal. We often find him on the verge of hysteria.

He is a bully and this is proved by his treatment of Piggy. He takes Piggy’s glasses by force and uses them to light the fire. He always ridicules him and laughs at his expense. He is a potential killer and dictator as Golding writer.

He snatched his knife out of the sheath and slammed it into a tree trunk…He looked round fiercely, daring them to contradict.

In fact he is a sadist and gradually becomes skilled at his trade – a little boy practised beyond his years in the process of slaughter.

“Jack begun to clean his bloody hands on the rock. Then he started work on the sow and punched her”.

Jack’s lust for absolute power blurs his rational ability. He frees himself from shame and self-consciousness. He gives vent to those tendencies which have been latent in him and which in the past had been checked by the rules of society. His philosophy of life can be summed up in his words:

“Who will join my tribe and have fun?”

After Simon’s murder he is given to cunning and becomes hypocritical, denying that the beast has been killed warning his tribe that it may appear again (in the guise of Ralph).

“Viciously, with full intention he hurled his spear at Ralph”.

Now he is a primitive chief. In his final attack on Ralph on the beach, when the naval officer appears he is wearing one of his trophies – Piggy’s glasses at his waist.

Jack’s character shows that where there are no restrictions from adults (civilized world), the primitive desires are released — hence a reversion to a primitive type. Apart from his black cap, he loses everything civilized. He replaces his leadership of the choir by the chieftainship of a tribe based on torture and murder and a lust for blood. No moral standards can check his drifting towards complete depravity.

Quotes about Jack in Lord of the Flies

“We’ve got to have rules and obey them. After all, we’re not savages. We’re English, and the English are best at everything.”

“His mind was crowded with memories; memories of the knowledge that had come to them when they closed in on the struggling pig, knowledge that they had outwitted a living thing, imposed their will upon it, taken away its life like a long satisfying drink.”

“They looked at each other, baffled, in love and hate.”

“I ought to be chief…because I’m chapter chorister and head boy. I can sing C sharp”.

“His specs – use them as burning glasses!”

“I agree with Ralph. We’ve got to have rules and obey them. After all, we’re not savages. We’re English, and the English are best at everything. So we’ve got to do the right things”

“Kill the pig, cut her throat, spill the blood’