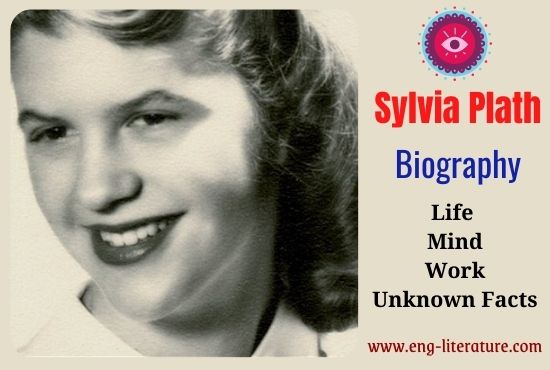 Sylvia Plath is widely acclaimed, distinctly controversial and highly influential American poet and novelist in the post-modern era.  Sylvia Plath was born on November 21, 1932 at Boston Memorial Hospital in Boston. She was the first child of Otto Plath and Aurelia Schober Plath. The Plaths were German immigrants to the United States of America. Otto Plath was a man of great learning, an expert in entomology. Two years after the birth of Sylvia his book Bumblebees and Their Ways was published. Sylvia received undivided attention from her parents. Her brother, Warren Plath was born in 1935, threatening her undisputed position in the family and evoking sibling rivalry in her young mind.

During the period 1936-1937 Plath’s parents bought a house on Johnson Avenue, at Winthrop, in Massachusetts, the suburb where her maternal grandparents already lived. From her childhood Sylvia Plath was more attached to her maternal grand-parents.

Plath entered Winthrop’s Public School system. At School she was an over-achiever and she showed her brilliance in academic pursuits. While Plath was achieving good grades in school, her position at home became vulnerable because her mother bestowed more attention on Warren. Aurelia did not have enough time to spare for Sylvia as she was to nurse Sylvia’s ailing father.

Otto Plath was confined to bed with a toe-infection and Sylvia was deprived of her father’s attention. Otto was a masochist who refused all medical help and finally died in the year 1940. His death is a very important event in the life of Sylvia Plath. Plath’s mother did not allow her children to attend the funeral. Her refusal wounded her sentiments to the departed father. After this tragic incident, her relationship with her mother was further strained and she felt emotionally alienated in her home.

Her first poem and her first drawing were published during 1940-41. Her grand-parents sold their house and moved into the house of the Plath’s. Plath’s mother began teaching at a school for secretarial studies in Boston University. In the year 1942 the family moved to Wellesley in Massachusetts.

Plath and her younger brother Warren joined the Perrin Grammar School. In the year 1944, Plath joined Alice, L. Phillips Junior High School. She graduated from Phillips in the year 1947 winning honourable mention in “National Scholastics”. She was the only student in the school’s history to earn at Sixth letter as well as an achievement certificate from the Carnegie Institute.

In September she entered Bradford High School. In Bradford also Plath maintained her excellent academic record winning straight A’s. In 1950 she appeared in school plays “The Admirable Crichton” and “Lady Agatha”. She graduated from Bradford and won a full scholarship to South College.

In 1953 she spent the month of June in New York as a guest editor of “Mademoiselle” fashion magazine. The experience proved seminal in the life of Plath because a girl from a small place was for the first time exposed to a highly permissive society of a metropolis. After her return to Boston she learnt that she was rejected admission to the Creative Writing Class of Frank O’Connor.

Depression descended on her and, she tried to commit suicide by swallowing sleeping pills. After taking the drug she hides herself under the porch of her house. She was found two days later in a precarious condition and was rushed to hospital. She spent five months at Maclean’s, an expensive, private mental-hospital in Belmont.

She joined Newnham College in Cambridge University. The first year at Cambridge was marked by continued academic success. She also joined the Amateur Dramatic Club of the University which staged mostly student productions. Throughout her Cambridge years Plath wrote to her mother regularly.

Sylvia Plath married Ted Hughes, the British poet at a private service attended by her mother. Ted and Sylvia spent their honeymoon in Benidorm, a small fishing village in Spain. In 1956 her Fulbright was renewed for a second year. Her husband taught drama at secondary schools. They found a small flat at Grantchester Meadows.

In March, Ted was notified that he had won the New York Poetry Centre award for his book The Hawk in the Rain and the book would be published in England and America. They sailed to the U.S.A. in June. They spent the summer at Cape Cod. Sylvia began teaching freshman classes at Smith College and proved herself to be an excellent teacher.

In 1958, Ted Hughes secured a teaching position at the University of Massachusetts at Amherst. They thought that creative writing would be hindered by teaching and left their jobs deciding to live on grants in Boston taking up un-academic jobs to maintain themselves.

During 1958-59 Plath and her husband lived in an apartment on Beacon Hill, Sylvia worked in the Boston Memorial Hospital briefly in the psychiatric wing, writing up case histories. The experience proved rewarding for Plath as she could better understand her own mind, by reading case histories of the mental patients. During this period she audited Robert Lowell’s writing classes at Boston University along with Anne Sexton and George Starbuck. She also spent some time at Yoddo, a writer’s colony along with her husband.

She returned to England in December, 1959. On February 1, 1960 they moved into Chalcot square. Ted Hughes’s another collection of poems Lupercal was published in the Spring. Sylvia Plath’s daughter Rebecca Hughes, was born on April 1, 1959. Heinemann published The Colossus the first book of verse by Sylvia Plath. She gave her first B.B.C. reading on November 20, 1960.

In 1961 she lost her second child through miscarriage. During February, she underwent appendectomy. She edited American Poetry Now as a supplement to The Critical Quarterly. On September 1, 1961 they moved into Court Green, a beautiful house in quiet Devonshire. Plath finished her novel The Bell Jar by August according to her note Book.

Sylvia Plath’s son Nicholas Farrar Hughes was born on January 17, 1962. She completed “Three Women” a monologue for three in May. The period from June onwards was full of tensions in the family. Sylvia discovered the adultery Ted was committing with Olga. She evicted Ted Hughes from her house. In September, she went to Ireland. The poems in “Ariel” and Winter Trees were being composed at rapid speed during this period. She moved to a London flat in December.

In the year 1963, London was hit by the worst snow storm. It depressed her further. The Bell Jar her only extant novel, was published on January 14, 1963 under the pseudonym, Victoria Lucas.

How did Sylvia Plath die?

She committed suicide by sticking her head into the gas oven on the morning of February 11, 1963.

Sylvia Plath suffered much in her life. She can be described as a case of an obsessive compulsive neurosis. She was a schizophrenic, schizoid and a paranoid (who) all rolled in one, who suffered ambivalence throughout her life both as an individual and a writer. It appears that her mental aberrations seep through her entire writings and give them a special flavour. A perceptive reader soon gets painfully aware of the element of self-pits, self-hatred, self-criticism that led her to suicide. In fact, the suicidal tendency looms large over her works. It also governs the pattern of her imagery and symbolism.

Broken Homes are generally responsible for personality disorders; therefore the whole gamut of her feelings needs to be thoroughly examined from the view point of psychiatry.

The sea played an important role in the life and works of Sylvia Plath. When she was a child, she used to run along the sea beaches with her grandfather. The sea was both attractive and repulsive to her. The sense of violence which is so cardinal to her work can be traced back to the violent visions of a hurricane which she witnessed as a child. The sea, further, is identified by the child with her father. The child believed not in God, but in mermaids.

Sylvia grew up into a highly emotional lady. She reacted violently, thought impulsively and acted hastily. She was never a conformist in her thought and actions which were often self-contradictory and self-cancelling. Her adoration and hatred for persons, places and things was equally in the extremes. She led a dangerous life, and died a violent death. Her life, her mental make-up, her writings all show that she was never understood properly because the persons, she came into contact with did not possess the necessary insight. She and her writings can only be understood when we try to understand her mental makeup with the help of psychology, psychoanalysis and modern psychiatry.