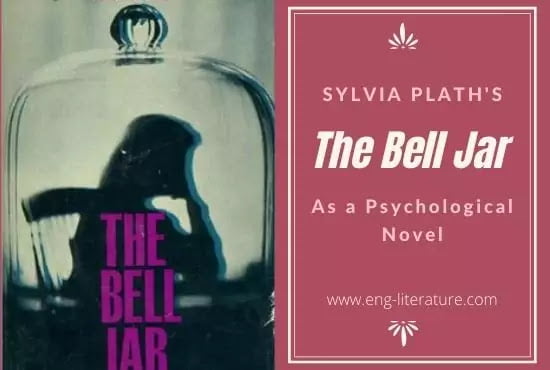 Sylvia Plath kept records of her life, and the surviving portions of this record have been published as her Journals. The resonance of personal vibrations could be easily noticed in The Bell Jar, her only novel.

The novel The Bell Jar is a confessional novel in which her personality has been fully mirrored through the character of an alter ego. Sylvia Plath uses first Person in The Bell far for the narrator, suggesting her complete identity with Esther, the chief protagonist of the novel. The incidents of Esther’s life have roots in the personal life of Plath. The author’s attitude towards life, sex, marriage, parents, virginity, doctors is all clearly reflected in the behaviour pattern of Esther Greenwood.

The Bell Jar is a psychological novel which reveals the authors’ narcissistic, obsessive and compulsive personality. Her novel and prose writing and the Journals constitute a veritable diary from which one can glean the subtle working of Plath’s mind. They are more in the nature of psychological catharsis which she thought would free her mental strain and hence she could not keep the distance between fact and fiction, art and life. Her predominant concern is with herself written in the stream of consciousness style which is the proper vehicle for her disturbed consciousness, for her frustrated soul.

The whole novel is narrated in the first person, a characteristic of psychological novels. The reasons for choosing the name are given by Phillips. He writes:

Esther of the old testament was the Jewish queen who kept her nationality a Secret. It was Esther who saved the Jews by pleading with the king. Such an identification would also confirm the oedipal nature of Plath’s work. Queen Esther was more than a deliverer of Jews. She was also the beautiful young virgin with whom king Ahaseurus united after his wife, queen Vashti, treated him with contempt. Plath reveals in the Bell Jar that Mrs. Plath treated her husband’s memory in a similar fashion.

Victoria is an obvious reference to the repressed sexuality attributed to Victorian England, Lucas is a variant on Luke, the disciple physician. The name then contains reference to the specific illness and to the writer as self-healer. Plath also later saw the novel as an exercise in psychological catharsis,

similarly, Greenwood was the maiden name of her maternal grandmother whom Plath liked very much.

The metaphoric title The Bell Jar of the novel is a symbol for the inner, alienated, sequestered world in which Esther Greenwood lives or which she imagines descends on her stifling and cutting off supply of communicative air with the outside, healthy, external world. That the Bell Jar also points out how obsessed she was with her own narcissistic universe. The Bell Jar is her own dark Vision, her own mind, her own narcissistic, obsessive-compulsive nature which clouds her view. It is an encapsulated, internal world. The claustrophobic title suggests how obsessed Esther was with her own identification, which she felt threatened at every stage and her defenses were too weak and too frail.

The novel employs the technique of a psychological novel so as to covey fully the inner working of the narrator’s mind. The stream-of-consciousness technique rightly suits the kind of confessional novel. The Bell Jar is the novel about the atmosphere of the mind and it is highly autobiographical. The candid self-examination, is so precise and disturbing that at times Plath turns away from it only to return again to it because of her obsession nature.

As in all psychological novels there is very little of action, in this novel. Whatever action in it is on the mental plane. It expresses the existential angst; the conflict between being and non-being. The most important feature of a psychological novel is discontinuity and The Bell jar is discontinuous in that sense. Discontinuity is only apparent because time is fused as narrative present gives way and sometimes takes the reader into the narrative past. A word, an incident, a pain in the leg are presented; and we travel through Esther’s past to know the reason and have a right perspective of it. Aird writes:

Sylvia Plath constantly translated Esther’s experience in the narrative present episodes into image of her inner journey. She recreates the mechanics of the mind which perceives, reacts and symbolizes.

All the characters in the novel are reflections or surrogates of herself with the result that we could surely conclude that the only character in the novel is herself Esther Greenwood. Aird writes:

The mode of communication between author and reader of The Bell Jar is that of invited self-identification with the protagonist; the major difficulty, which this entails lies in the provision of any degree of objectivity against which the subjective world can be measured.

Plath attempts objectivity by using black, wry humour and ironic self-comment. The unconscious is expressed through symbols. In the novel we find various symbols and images and metaphors through which Plath attempts to convey the atmosphere of her mind to use and make us grasp it. The disorderly thoughts are shuffled in order to give a semblance of order. Psychological novels are also called as “Time novels” and the Bell Jar concerns itself with time, time past, time present and time future. Plath Tries to arrest a moment even before it flees her. The Bell Jar concerns itself with psychological time and not chronological time because the novel imitates human consciousness itself as Edel writes:

The mind cannot accommodate itself to chronological or mechanical time, but is constantly moving blocks of time from past to present to past and without regard for logical sequence.

The Bell Jar is a work of imaginative transformation. The novel is designed to convey a psychological frame of mind, the mental condition, which the novel’s title gives metaphoric embodiment. Events are not reported chronologically but associatively as the narrative present gives way to the narrative past in a modified stream-of-consciousness structure. Esther’s consciousness is characterised by increasing patterns of dissociation, fragmentation, alienation and finally psychological paralysis.

The characters in the Bell Jar can be viewed as composites; relations, memories, pastiches of the flesh and we obtain depth of experience. We find a process of free-association so great that gaps of time are easily filled, distant things become close, near things become distant, people who are dead come alive. This aspect has been stressed by Marcel Proust who felt:

The topic sentences of each lead paragraphs are curiously condensed and isolated, implying that if they were compiled vertically, we would all.