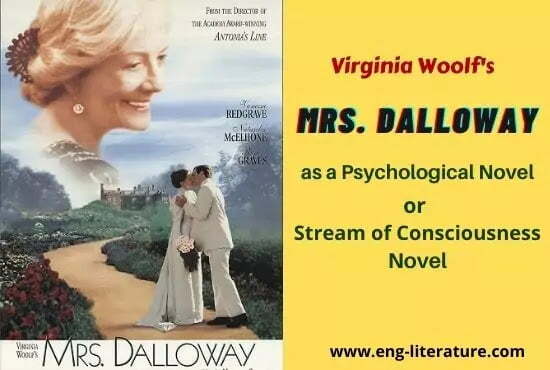 Stream of Consciousness in Mrs dalloway

The stream of consciousness is new method of writing which departs from the traditional way of writing novels. It catches at the thoughts and feelings of the persons than action or external event actually. It aims to explore the human consciousness, the feelings and thoughts, vague emotions and sensations that pass and re-pass in the minds of the characters at different crucial moments. It renders the very atmosphere of the mind and the outer or external world is introduced only in so far as it helps in bringing out the activity of the mind. The Stream of consciousness is a difficult technique but in Mrs. Dalloway it has been deftly experimented by Virginia Woolf. The technique has reached the high water mark of perfection in Mrs. Dalloway.

The Refinedness of Woolf’s Stream of Consciousness Technique

By the year 1925 when Mrs. Dalloway was published the stream of consciousness had almost become a craze in England and the novelists were employing it almost commonly. The problem at this time before them was to find out a way to impart order and form and discipline to it. In Mrs. Dalloway it is to the latter task that Virginia Woolf particularly set before herself. The scope in time and place is restricted by her and the characters in her novel are few and their relations to each other are clear-cut. It presents a combination of the exploration of inner life with order, form and discipline.

Perfection of Technique in Mrs Dalloway

Monday and Tuesday is merely a series of experimental speeches, in Jacob’s Room the possibilities of a new technique for presenting experience has been explored. It is in Mrs. Dalloway alone that a deliberate effort has been made to bring all the tracts of experience into a single focal point.  The subject of the novel is of life a single day, a Wednesday mid-June 1923, from morning to evening. During this brief spell of time the novelist is able to capture not only Clarissa‘s (the main character) past, her revolution, her history, her personality, her character, but also a description of many persons who are either directly connected with her or those who come across her at some moment in the day, or about whom she is led on to think. This is called a psychological time which deals with the internal and the external subjectivity of each character’s thought and emotions in order to represent the flow of consciousness, which is interrupted by the clock.

“Mrs. Dalloway said she would buy the flowers herself”

(1) Manipulation of time and space in a narrow framework

The entire structure of the novel is built on the dimensions of space and time. Like James Joyce in Ulysses Virginia Woolf in Mrs. Dalloway, selects only one day from morning to evening, in the life of Clarissa Dalloway and constructs her story during the events of this short span of time. The central or the focal point follows an alternate course as it passes from the consciousness of one character to another and from London to Bourton, and from the present to the past. We either stand still in time dare led to brood over diverse but contemporaneous events in space, or we stand still in space and are allowed to move up and down temporally in the consciousness of same particular individual. Events introduced in the novel are largely psychological.

There is a constant backward and forward movement in and out which corresponds exactly with the thought processes. We are at first introduced to the stream of consciousness of a particular character, and then we are made to pause to see into the environments of the characters. Still further on we are given an opportunity to have a peep into the minds of other characters who are relevant to that environment. We are taken into the past each time we investigate into the mind of any one character in detail and an escape from the chronological time-sequence is thus effected. The past, though on a much smaller scale, in Ulysses is more important than the present; it is equally so in Mrs. Dalloway, though the action covers no more than a single day.

(3) Emphasis on clock-time and personal identity

There are certain signposts or land-marks in Mrs. Dalloway deliberately introduced by the novelist to lend clarity and afford order and discipline. We stay still in time but rapidly move through the minds of various characters and have before us for a time different kinds of consciousness, which are held together by a unifying force. The clocks of London strike from the beginning to the end throughout the novel. The London clocks strike because the novelist has a purpose in presenting their sounds. The time Septimus, Rezia repeated, ‘What is the time?’ He was looking at them, ‘I will tell you the time,’ said Septimus very slowly, very drowsily, smiling mysteriously. As he sat smiling at the dead man in the grey suit, the quarter struck, the quarter to twelve. The clock strikes the hour as we pass from Septimus Smith to Peter Walsh. We have to pass from one consciousness to another, because they impinge in time and every impingement is suggested by the striking of the clock. The clock strikes or chimes almost every fifteen minutes throughout the novel.

There is complete self-effacement of the novelist in a stream of consciousness novel, but it results in incoherence, disorder and lack of clarity, which is not good from the artistic point of view. But Mrs. Dalloway is an exception, as it brings a successful compromise between self-effacement of the author and the convention of the omniscient author, and this results in considerable gain in point of clarity and order. The minor characters, like Rezia, Septimus, Hugh Whitbread, the Bradshaw instead of being perceived through the stream of consciousness of other characters, are sketched from without by the omniscient writer himself.

The stream of consciousness novelist employs third person, ‘he or she’, which is an intermediate sort of pronoun. Virginia Woolf goes even a step further and uses ‘one’ as in the following sentence:

“For having lived in Westminster- how many years now? Over twenty one feels even in the midst of the traffic, or working at night, Clarissa was positive, a particular hash, or solemnity?”

This serves the purpose of identifying the thinker and enable he to pass into a new action without in the least impending the stream of thought.

(5) The emotional and associational links

The transitions and connections in the novel are deftly managed, but they are emotional and associational, and not logical. The touch of the air on a June morning makes Mrs. Dalloway remember similar feelings of the morning 30 years ago at Bourton. This brings forth into her mind crowds of memories of the past. She is reminded of Sally Seton who was fond of green colour when she chose the green dress for her party. Memories of Peter Walsh are suddenly roused in her mind when she just by chance happens to meet Hugh Whitbread. Septimus and Rezia are also connected emotionally with Clarissa Dalloway, as they look at the same car and the same aeroplane at the same time and their minds also come to be filled with identical thoughts.

Stream of Consciousness of James Joyce Vs Virginia Woolf

James Joyce is not bothered whether the readers make out something from the narrative or not. Virginia Woolf tries, unlike him, to be comprehensible and clear. She is an inventive genius. She only reports rather than directly transcribes the stream of thought of her characters. And this reporting is different, very different from the one done in the traditional Victorian novel or earlier. She strikes a compromise between the reported thought and the direct transcription of the chaotic consciousness. She is able to depict the ebb and flow between the subjective and the objective attitude.

James Joyce takes the raw material of consciousness and expands it into a summary of all existence by taking analogies from history, science and art. Virginia Woolf, on the contrary, avoids all such analogies and makes her point by the way she selects her material and organizes the depiction of the thought processes. James Joyce presents all the points of view, whereas Virginia Woolf presents only her own.

As a superb psychological novel, Mrs. Dalloway renders the inner life of characters and their shimmering experiences, and in so doing it is able to impose form and order on what by its very nature is chaotic and disorderly. The novel stands unrivalled, indeed, so far as its technical mastery is concerned. It is Virginia Woolf’s most remarkable achievement, especially in the field of the stream of consciousness novel.