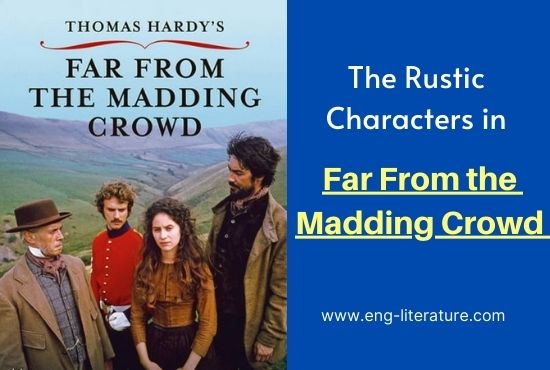 Roles of The Rustics in Far From the Madding Crowd

In all the great novels of Hardy except Tess of the D’Urbervilles and Jude the Obscure the rustic characters as a group form a different category among Hardy’s characters. They are, what David Cecil calls, Hardy’s ‘chorus’ characters because in his great works they form the “chorus to the main drama”. In Hardy it is the rustics who bring children to birth, dance at the wedding, mourn at the graveyard, and speak the epitaph over the tomb. From this viewpoint Hardy is in straight tradition from Shakespeare.

The rustic group in Far From the Madding Crowd includes Joseph Poorgrass, Jan Coggan, Henery Fray, Mark Clark, Jacob Smallbury, William Smallbury, Matthew Moon, Laban Tall and Cain Ball. Almost all of them have been individualised, but at the same time contribute to the novel collectively as a group of rustics. Several times during the novel, Hardy spends entire chapters giving an account of how the common labourers speak, how they spend their free time, and their opinions about each other. Like Shakespeare, Hardy often uses them to effect comic relief, offsetting a tragic scene–for example, the deaths of Gabriel’s ewes with one of a more light-hearted tone.

The rustics in the novel are made to provide pure humour and Joseph Poorgrass is perhaps the greatest source of humour in the novel. He is a self-conscious, modest, bashful person. He also amuses us by his timid nature. Jan Congan relates how Poorgrass, while once coming at night through a wood, replied with fear to an owl crying ‘whoo-whoo-whoo’.

Jon Coggan is also a fine source of humour. He holds strong views on equality where sharing of liquor is concerned. He has the record of attending every marriage that had been held in the village for the past twenty years. All these are quite amusing to the readers of the novel. And we can hardly forget Laban Tall, who has no personality of his own and is referred to as Susan Tall’s husband.

However, the rustics in Far From the Madding Crowd are made to serve some more serios function by Hardy. On such occasions as the sheep-washing and sheep-shearing scenes, the farm workers act as a kind of Greek chorus. At Boldwood’s Christmas party, tension builds through the use of the villagers comments about Troy, just like a Greek tragedy in which the conflicts about to be unleashed are commented on by the chorus. They alone know what the reader knows–that Troy is alive, and may turn up at the party. Like the reader, they are powerless to intervene. The villagers articulate all the fears the readers have about how Boldwood and Bathsheba will react to Troy’s presence.

Though the rustics in general may not be considered as quite essential or indispensable to the plot of the novel, at one or two places at least their actions seriously influence the plot and determine its future course. For instance, it is because Joseph Poorarass’s delay that Fanny cannot be buried and her coffin has to be placed in Bathsheba’s house. This leads to that awful scene between Troy and Bathsheba, and then to the tragedy in Bathsheba’s life. Thus Joseph Poorgrass, who was detained in the tavern by Jan Coggan and Mark Clark, plays a vital role in the plot of the novel.

Finally, the rustic characters in the novel may also be found to illustrate a part of Hardy’s philosophy of life. It is evident that, while the principal characters like Bathsheba, Boldwood and Troy suffer various misfortunes, the rustic characters are on the whole a cheerful, happy, and carefree lot. Hardy may thus seem to convey to us his belief that only those persons are happy who have less or no aspirations, ambitions or desires.