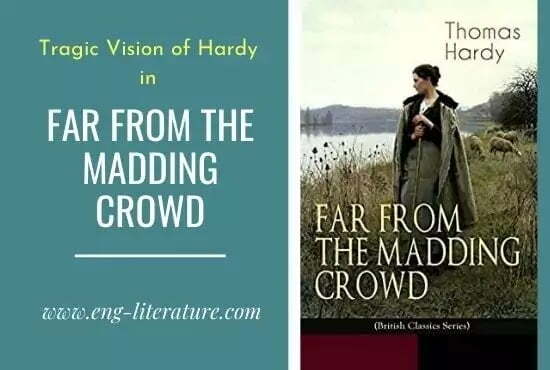 The evolutionary theory of Darwin, the pessimistic philosophy of Schopenhauer, and T. H. Huxley’s doctrine of agnosticism severely tossed and confused the Victorian mind. Hardy, who in his novels launched forth a quest for the causes of human suffering, found all available interpretation inadequate. He, naturally, tried to reinvestigate why happiness ‘is but the occasional episode in the general drama of pain’. His own diverse explorations in this regard crystallised into a vision of life, known popularly as Hardy’s tragic vision of life.

In Hardy’s view suffering is the universal law in an imbecile world where absolute mis-governance reigns supreme. Hardy’s novels project the vagaries of Destiny which are responsible for the strange orchestra of victim shriek and pain). In Tess of the D’Uibervilles the tragic fate sports with the life of the innocent girl. In Jude the Obscure old Father Tinie has to commit suicide because life is not worth living, In The Return of the Native Eustacia feels that she is ‘a sport for Heaven’ Evidently, Hardy’s novels project the gloomy picture that man is a puny plaything in the hands of a malevolent Destiny which disrupts the smooth course of life, Far From the Madding Crowd also illustrates the same tragic attitude of the novelist to life.

It is true that Far from the Madding Crowd is less tragic and the only one of Hardy’s Wessex novels which is allowed to have a “happy ending’. Yet the tragic elements much outweigh the final reconciliation. Like all tragedy it leaves us face to face with the mystery of human evil and suffering. As Hardy sees it, the personal fate of the individual is largely at the mercy of impersonal forces over which he has little control, or at the mercy of minor mistakes which prove to have incalculable major consequences.

The first important occurrence of chance or accident in the novel takes place when Gabriel loses his flock of two hundred sheep. Oak was aspiring to become one day an independent and prosperous farmer. But one night his younger dog drives two hundred sheep over a hill as a result of which the sheep are all killed. Fate here plays the cruelest role to frustrate the dream of an individual. Fate also brings Oak through a series of chance and coincidences to be employed as a shepherd under Bathsheba, whom he once proposed and was rejected.

Fate is responsible for Bathsheba’s changes in fortune as well. Here also chances and coincidences play their havoc to cause miseries to the beautiful lady. Her uncle happens to die and leave her the farm. Bathsheba happens to see Boldwood and be offended by his lack of attention. It prompts her to send a valentine as a cruel joke. Bathsheba has already set the tragic wheels of fate in motion by her foolish encouragement of Farmer Boldwood. Fate now brings Sergeant Troy to Weatherbury and Bathsheba becomes infatuated with Sergeant Troy, a philanderer. She marries him, although he is already involved with Fanny. The situation is thus complicated by the invisible string of fate.

Bathsheba’s life is ruined by her marriage to Troy. She resents his selfish ways, his gambling, and his refusal to work on the farm. When Bathsheba learns about his affair with Fanny, it is too late. The girl and her child are already dead, and Troy deserts her. Finally when Bathsheba is ready to accept her mistake in encouraging Boldwood and marry him out of pity and duty, Troy dramatically reappears on the scene. Troy’s fateful return coincides with the Christmas party offered by Boldwood in honour of Bathsheba. Appropriately, the deranged Boldwood, who is still obsessed with Bathsheba shoots him. The death of Troy and the incarceration of Boldwood allow Bathsheba and Gabriel to finally acknowledge their love for one another. But by then Fate has caused much suffering to the hero and the heroine.

It has been alleged that Hardy’s philosophy of life is incurably pessimistic. But it will be a mistake to think that his refusal to paint life golden is the result of his blindness to the colours of life. He drew the mopish profile because he knew for certain that ‘if way to the better there be it exerts a full look at the worst.’