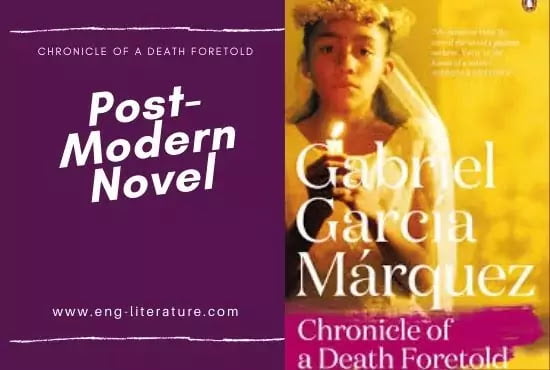 Chronicle of a Death Foretold as a Postmodern Novel

The turmoil that the Western society witnessed in the aftermath of the destruction of two wars of twentieth century was not so easy to overcome. The era that was ushered in saw the rapid transformation of all that was familiar to the west. The social and cultural scenario in the West was in a state of flux as the post-war world witnessed several economical and political upheavals along with revolutionary technological developments. In literature, it constructed a discourse that rejected totalizing narratives and instead believed in partial, fragmented and incomplete narratives. Postmodernist fiction soon became an international phenomenon.

Garcia Marquez through his novel Chronicle of a Death Foretold presented a postmodern masterpiece. The novel was inspired from Garcia Marquez’s own life. A gruesome killing of his own friend in Sucre, Colombia (1951) in the name of honour was turned into a complex and rich plot of this novella. The story is an attempt to piece together the fatal day when a young man is murdered, for having seduced and deflowered a young woman, who is disowned by her outraged husband and is returned to her family.

Written in the vein of popular literary genre of postmodernism i.e. a detective fiction, Chronicles of a Death Foretold, helps in reinstating what Linda Hutcheon, in her phenomenal work A Poetics of Postmodernism: History, Theory, Fiction calls “the presence of the past”. As per Hutcheon, the most important concept of postmodernism is to see the past with critical eyes, Marquez’s narrator, is a journalist, who comes back to his hometown in order to reconstruct the events that led to the butchering of his friend Santiago Nasar. Garcia Marquez’s narrator is not the omniscient narrators of the past. On the contrary, this is an indecisive, subjective and hesitant narrator who finds it difficult to analyse the past incidents from an objective point of view.

Chronicle of a Death Foretold contains multiple narratives, that is an amalgamation of facts, feelings, imaginations and memories of all the characters whom the narrator investigates in order to arrive at the crux of the death of Santiago Nasar. All of these narrations are peppered with several surreal and fantastic descriptions about the day and weather “…but most agreed that them weather was funereal, with a cloudy low sky and the thick smell of still waters…”

It makes the reader realise that in narrator’s world reality and fantasy coexist. This postmodern technique of fusing the ridiculous and real and thereby creating an alternative reality, attained perfection under the hands of Garcia Marquez who had achieved world recognition for his extra ordinary use of Magic Realism.

Irony the most avidly used technique by the postmodern writers has been suffused into this work to make it multi faceted. The title, Chronicle of a Death Foretold, makes a mockery of the process of chronicling as the story line operates in a circular manner; the novella begins and ends with death. Marquez pushes the envelope with his own deconstruction of the entire traditional way of presenting a murder investigation. Everyone in the novella is aware that Santiago Nasar is going to be killed, “There had never been a death more foretold”. However, no one warns this unfortunate protagonist. Therefore, Garcia Marquez’s title operates on two levels, the death has been foretold to the readers at the onset and the brothers who would be avenging their sister’s honour also.

The other irony is the elusive question whether Santiago Nasar was destined to die, to which the narrator observes:

“… but no matter how much they tossed the story back and forth, no one could explain to me how poor Santiago Nasar ended up being involved in such a mix- up.”

Postmodernist novels had started the trend of defying the expectations usually associated with the main characters of a novel. One is then forced to view this chronicle as a parody or even a mock tragedy where the protagonist is fated to die. However, the complexity of this text lies in the categorization of Santiago as the hero. Throughout the entire novel one can’t help but realise that Santiago was not the typical hero. He was not even a hero but an ordinary man who had his own fears, own faults and own flaws of character.

Marquez deliberately tantalises the readers with various people’s impression of Santiago in order to maintain the curiosity and confusion of his readers. On one hand, we have the narrator stating “by his nature Santiago Nasar was merry and peaceful and openhearted” (Marquez, 6) and on the other, we have Victoria Guzman, Santiago’s servant who reveals about him “He was just like his father…A shit” (Marquez, 8). Further, we have the narrator’s sister Margot who observes “I suddenly realised that there couldn’t have been a better catch than him”

The detailed autopsy report of Santiago Nasar, prepared by an unqualified priest and the inability of the entire official authorities to prevent the butchering of Santiago from taking place, brings the element of absurd in the text to the forefront. The narration also erases the old beliefs about the inherent evilness about the villains, for Marquez through this novel shows the murderers of Santiago to be humans who are following their brotherly duty in avenging the honour of their family and especially their sister. “Their reputation as good people was so well-founded that no one paid any attention to them….”

Beyond the inversion of narrative technique and the characterization of the hero, even the traditional path of love is turned upside down in this novel. The narrator mentions that Angela Vicario was never given the privilege of falling in love as she was brought up in a strict patriarchal society and at the beginning had detested her suitor Bayardo San Roman, “I detested conceited men, and I’d never seen one so stuck-up,…” (Marquez, 29). She is forced to marry this man as nobody in her family views love between the couples as a pre-requisite to good marriage. Moreover, for Angela’s mother “love can be learned too” (Marquez, 34). However, Bayardo falls in love with Angela at first sight; but even Bayardo’s love is unable to overcome his wife’s lack of virtue. Ironically, Angela after being abandoned on the doorstep of her parent’s house, by her husband realizes that she has now fallen in love with her husband.

Therefore what Marquez has achieved through Chronicle of a Death Foretold is to provide the readers with a novel that is open to multiple readings. It reinforces its important feature of being comfortable with the self reflexivity, temporal disorder, fragmentation and irony, the cornerstones of cultural and literary phenomenon called postmodernism. And it is through texts such as this, that one can attempt to understand a complex phenomenon that has left all the critics divided in their opinion of whether to praise or to criticize it.