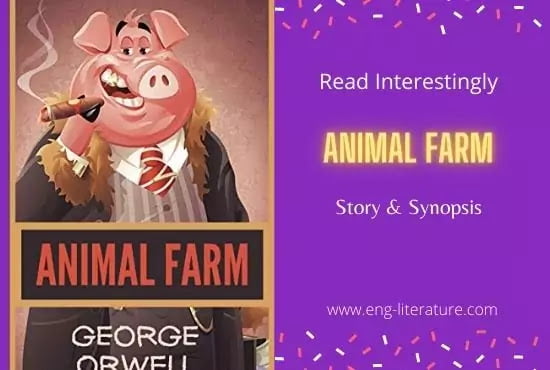 In the first chapter of the book, all characters are quickly drawn for the reader. So, it would be quite wise to give some information about the major characters before proceeding with the summarized story of Animal Farm.

Old Major is a venerable old boar whose vision of a better life and his call for rebellion are the inspiration for the founding of ‘Animal Farm’.

Snowball is a young boar whose persuasive powers and theoretical intelligence make him a contender for the leadership of ‘Animal Farm’‘.

Napolean is another young boar whose ambition and direct approach to gaining power cause him to win the struggle for leadership of the farm.

Boxer is a cart horse of great strength, loyalty, and small intelligence who is foremost in the projects requiring physical labor.

Clover is a mare whose motherly concern for all the animals makes her a source of personal strength for all, especially during difficult times.

Benjamin is a donkey whose skepticism about any kind of society and human nature remains unchanged.

Moses is a raven regaling the animals with stories about the better life on Sugarcandy Mountain.

Mollie is a mare with frivolous attitude and personal vanity.

Squealer is a porker used by Napoleon to explain the actions of the pigs.

Finally Mr. Jones, is the human owner of ‘Manor Farm’.

The story of Animal Farm begins with the meeting called by Old Major, twelve year-old boar, an elder statesman, and a visionary. After all the animals of the Manor Farm ran by Mr. Jones gather in the barn, Old Major starts his speech. He talks about the unhappy lot of animals in England, gives many instances about Man’s cruelty to them, and tells them that he envisions a future happy time in which Man has been removed. He even lists the vices of Man and warns the animals that they should avoid if this future free state is to be achieved. All the animals listen to him attentively, and at last, share Old Major’s simple view: Man is bad, animals are good, and enthusiastically sing the song ‘Beasts of England’, expressing his vision for the animals’ future.

The location of Manor Farm is an ideal setting, isolated from outside interferences, and is available for establishing the pastoral life which Old Major dreams of. The Rebellion comes quite unexpectedly; the animals break into a storage shed and begin to eat their fill after Mr. Jones has left them unfed for a day. When Jones and his men try to beat the animals with their whips, all of them become very angry and attack the humans, and drive them off the farm. Thus, the transformation of the Manor Farm into Animal Farm realizes.

After the Rebellion and their tour of the house, they decide to preserve it as a museum, and paint the Seven Commandments of Animalism on the barn. As the pigs make these changes, Snowball and Napoleon are to be the leaders of the farm. Then, the dream of Old Major, who is dead now, quickly becomes a philosophy called ‘Animalism’, and is worked out exclusively by Snowball, Napoleon, and Squealer.

When the harvest time comes, the animals realize that they must take over day-to-day operation of the farm. Under the pigs’ directions, they finish the harvest in fewer days than Jones ever had. As a result, their food is abundant, and life is better. Thanks to Snowball’s leadership, the animals very quickly take on the characteristics of ‘civilized ‘ human society. On Sundays, they hold meetings to plan the next week’s work and to discuss any decisions. However, Snowball and Napoleon disagree most of the times, and a real struggle for power begins between them. While the animals learn to read and write, the pigs’ privileges as rulers increase and Napoleon deliberately takes puppies under his personal care. Snowball simplifies the Seven Commandments into one slogan “Four legs good, two legs bad”, while Squealer, the propagandist for the pigs tries to justify the pigs’ actions.

By the way, there appear rumours on other farms to join Animal Farm and rebel against the tyranny of their masters, and their masters try to discredit this new society by circulating rumours of immoral excesses in the animals’ behavior and their failure to govern themselves. Thus, the Battle of the Cowshed is fought with humans. With Snowball in the forefront, animals lure the humans into a trap and quickly defeat them. After the victory, they decide to commemorate the battle and the Rebellion, by having two ceremonies each year.

After the victorious battle, the building of the windmill and the defense of the farm are the main two subjects to be dealt. As Snowball explains the necessity of a windmill which will provide many benefits for all the animals, they decide to build it. Upon this, Napoleon calls his dogs -which he has kept hidden-, they attack Snowball, and he barely escapes death, and runs away. Then, Napoleon claims that Snowball was an enemy, and that the plans for the windmill were his, and eventually takes over the charge of Animal Fann, establishing a kind of dictatorship. He abolishes the open meetings of Sundays, and instead, establishes an assembly during which the animals are given orders for the week to come.

Now, the animals’ life is hard. They work a lot, the work on the windmill proceeds slowly, as a result, the second year is not as successful as the first was, but still, they believe that their life is better than it was under Jones. Napoleon starts establishing trade with humans, the pigs move into the house, sleep in beds, and encourage the use of titles when addressed to Napoleon. When the windmill is blown down in a severe storm, Napoleon makes the animals work harder for rebuilding it, and proclaims that Snowball is responsible for the disaster.

Like any dictator, Napoleon makes it appear as though everything is going well under his rule. So, although the winter has been hard, and the supplies are running low, he makes it appear that there are more supplies than needed, and arranges to sell eggs in order to buy necessary supplies to survive until spring. In addition, to prove his power, under the pretext of a rebellious attitude, he executes four pigs, threatens the animals by reducing their rations, makes himself inaccessible, and bans ‘Beasts of England’, the song that gave rise to the creation of Animal Farm.

Even though the animals are working long hours and harder than ever before, Squealer presents long lists of figures to prove that things are better than they ever have been before. Whenever there are outrages or questions of the hungry animals, Squealer pacifies them. When one of the farmers intends to take over Animal farm, ‘The Battle of the Windmill’ takes place, and the humans destroy the windmill which enrages the animals and disregarding their guns drive them away.

Thus, life continues to be hard, and rations are again reduced for the working animals. However, Squealer, once again, convinces them to go on with the life they lead. Meanwhile, a school is to be built for the pigs who begin wearing ribbons, brewing their own beer, appropriating all the barley grown on the farm for themselves. Upon the events, animals grumble a little, but finally accept them all. As time goes by, Napoleon is becoming more and more like Jones, and he makes Animal Farm into a class society with two groups: the ruling and the working class.

Finally, Napoleon becomes indistinguishable from Jones, and animals discover the truth when they watch the pigs and human beings together in the farmhouse. Pigs have taken on more characteristics of humans: they have begun walking upright, carrying whips, subscribing to newspapers, having a telephone, and wearing human clothes. The Commandments have been changed and eventually replaced by