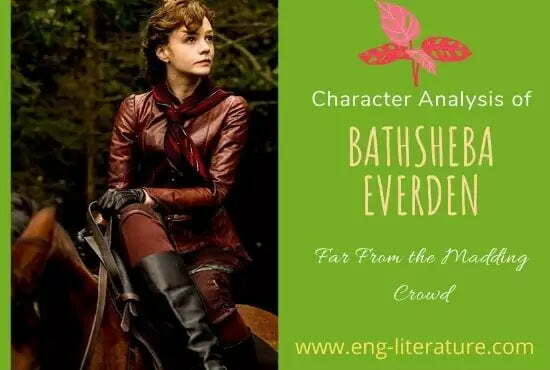 Bathsheba Everden, the beautiful young woman at the center of the novel, Far From the Madding Crowd, is endowed by Hardy with charm and personality. She stands at the center of the novel as the object of three men’s attention. She is a slim, tall, and dark-haired beauty that is quite concerned her appearance and her acceptance by others. She is also an independent woman who has a strong hold upon life. She can manage her farm efficiently, as seen in her handling of the dishonest bailiff. She cares about the farm workers, paving personal attention to the payment of their wages and treating them to refreshments. She is, again, not afraid of manual labour, as seen when she helps Gabriel cover the ricks in the midst of the storm. As the lone woman manager, she carries on business transactions with men at the corn market with remarkable skill, on an equal footing with her male peers. As patron of the harvest festival also she reigns supreme

It may here be noted that Bathsheba, who must choose among three very different suitors, is the protagonist who propels the plot of the novel through her interaction with her various suitors. At the beginning of the novel, she is penniless, but she quickly inherits and learns to run a farm in Weatherbury, where most of the novel takes place. Her first characteristic that we learn about is her vanity, and Hardy continually shows her to be rash and impulsive. However, not only is she independent in spirit, she is independent financially. This allows Hardy to use her character to explore the danger that such a woman faces of losing her identity and lifestyle through marriage.

However, it has become commonplace among critics of Hardy’s Far From the Madding Crowd to say that Bathsheba Everdene develops through misfortune and suffering from a vain, egotistical girl into a wise, sympathetic woman. At the beginning of the novel, Bathsheba is a woman filled with vanity and pride. She often looks at herself in the mirror and admires what she sees. She turns down Gabriel’s proposal, for she feels he is beneath her. She is incensed that Boldwood does not pay her attention and manipulates him into loving her. But as the novel advances, there is a change in her character for the better.

At the end of the novel, Bathsheba is a mature woman free from vanity and pride. She cleans the tombstone of Fanny Robin, the lover of her husband. She lays Troy out for his final burial. She regrets her ill treatment of Boldwood, and agrees to marry him out of a sense of guilt. And in the end, she realizes the worth of Gabriel and knows he is more than worthy of her.

Her attention to the three men who are attracted to her marks the progress of her maturity. She at first rejects Gabriel Oak‘s love, for she feels she is better than he. However, she recognizes all along his superior qualities and is drawn to him for advice and comfort. She is carried away by the flattery of Sergeant Troy and marries him out of infatuation with his charm without knowing anything about his involvement with Fanny. Her flirtation with Boldwood arises out of selfishness. She emerges as a heroic woman after the death of Troy. She does not turn hysterical, but takes command of the situation with coolness and courage. Hardy nightly remarks,

“she was the stuff of which great men’s mothers are made.”

Among Hardy’s major novels Far From the Madding Crowd and Under the Greenwood Tree, with their happy endings, can be seen as attempts to show, in the comic mode, the possibility of amendment and recognition. Fancy Day, the whimsical heroine of Under the Greenwood Tree, does return to her native place and does marry her rustic lover under a greenwood tree. Far From the Madding Crowd may also apparently seem to show something similar – the growth of Bathsheba from impulsive folly to good sense and finally marriage to Gabriel Oak. But Bathsheba is subject to a more severe law than Fancy, Bathsheba is in Hardy’s view an agent and a victim of the tragic inalterability of things for she is afflicted by what he calls, in the first chapter, ‘woman’s perspective infirmity.’

Tragic Vision of Hardy in Far From The Madding Crowd