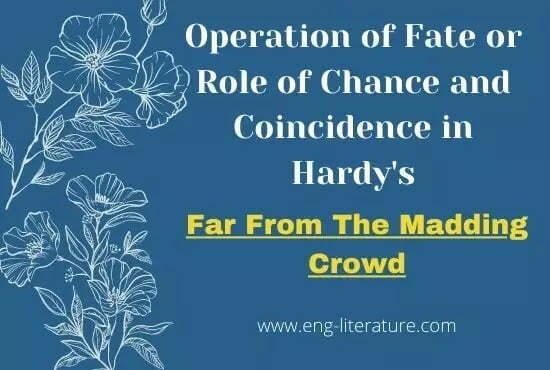 Role of Chance and Coincidence

A struggle between man and an omnipotent and sinister fate is Hardy’s interpretation of the human predicament. Man in Hardy’s novel is almost invariably pitted against impersonal forces which condition and maim his life. Destiny in Hardy operates in different forms – as natural forces, as chance and accidents, and serves as an instrument of frustrating human dreams and aspirations.

The rapid growth of Industrial Revolution in one hand and the destruction of agricultural life in the other, disintegration of rural framework, and loss of human dignity turn Hardy fluctuating between fatalism and determinism.  He considers life in terms of action in the doomed struggle against the circumstantial forces against happiness. In all his novels, Fate appears as an artistic motif in a great variety of forms- chance and coincidence, nature, time, woman, and convention. But none is Fate itself, but rather all of these are manifestations of an indifferent God, the Immanent Will.

It is true that Far from the Madding Crowd is less tragic and the only one of Hardy’s Wessex novels which is allowed to have a happy ending’. Yet the tragic elements much outweigh the final reconciliation. Like all tragedy it leaves us face to face with the mystery of human evil and suffering. As Hardy sees it, the personal fate of the individual is largely at the mercy of impersonal forces over which he has little control, or at the mercy of minor mistakes which prove to have incalculable major consequences.

The first important occurrence of chance or accident in the novel takes place when Gabriel loses his flock of two hundred sheep. Oak was aspiring to become one day an independent and prosperous farmer. But one night his younger dog drives two hundred sheep over a hill as a result of which the sheep are all killed. Fate here plays the cruelest role to frustrate the dream of an individual.

Again it is merely by chance that Oak’s quest for an employment as a bailiff or a shepherd in the Casterbridge ‘hiring fair’ becomes fruitless. It is also nothing but an accidental happening that he falls asleep in the abandoned waggon by the side of the Weatherbury road and is taken to Bathsheba‘s farm. The incident of fire in the farm is coincidental with Oak’s arrival there. Fate thus brings Oak through a series of chance and coincidences to be employed as a shepherd under Bathsheba, whom he once proposed and was rejected by.

Fate is responsible for Bathsheba’s changes in fortune as well. Here also chances and coincidences play their havoc to cause miseries to the beautiful lady. Her uncle happens to die and leave her the farm. Bathsheba happens to see Boldwood and be offended by his lack of attention just at the time of Valentine’s. When he ignores her, she sends him a valentine to attract his attention. Bathsheba has already set the tragic wheels of fate in motion by her foolish encouragement of Farmer Boldwood. He takes seriously the seal, “marry me,” that she adds to the card. His life becomes an obsessive pursuit of this woman he loves.

Fate now brings Sergeant Troy to Weatherbury and Bathsheba becomes infatuated with Sergeant Troy, a philanderer. She marries him, although he is already involved with Fanny. The situation is thus complicated by chance and coincidences without any knowledge of the persons concerned.

Bathsheba’s life is ruined by her marriage to Troy. She resents his selfish ways his gambling, and his refusal to work on the farm. When Bathsheba learns about his affair with Fanny, it is too late. The girl and her child are already dead, and Troy deserts her. Finally when Bathsheba is ready to accept her mistake in encouraging Boldwood and marry him out of pity and duty, Troy dramatically reappears on the scene. Troy’s fateful return coincides with the Christmas party offered by Boldwood in honour of Bathsheba. Appropriately, the deranged Boldwood, who is still obsessed with Bathsheba, shoots him. The death of Troy and the incarceration of Boldwood allow Bathsheba and Gabriel to finally acknowledge their love for one another. But by then Fate, through chance and coincidences, has caused much suffering to the hero and the heroine.