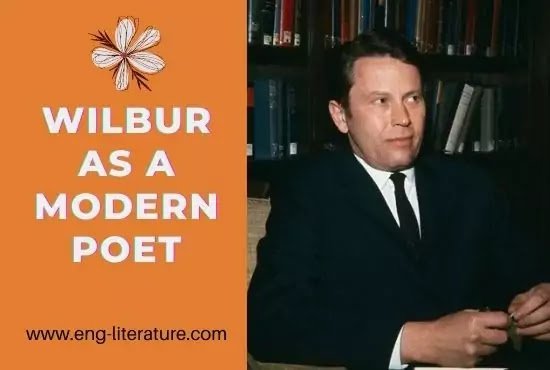 Richard Wilbur is the most renowned modern American poet, of 20th century. The freshness of his imagery, diversity of his themes and the handling of complex stanza forms make his poetry impressive and charming.

Wilbur has a variety of striking techniques in his poetry. The tone in his poems vary from the light and comic to the tragic and gloomy.

Realism is the most important feature of Wilbur’s poetry. It is the hallmark of his poetry. He is a realist, and each poem of Wilbur is true to life. His poems present realistic themes and issues, taken form everyday life. In the “Last Bulletins” Wilbur has highlighted a unique issue of the value of the newspapers after passing one day. He throws light on a modern dilemma as to what is the worth of newspaper after all? He has realistically brought to light the worthlessness of newspaper by showing how wind takes paper from one place to another and how newspapers are crushed under the feet of the people. He says:

“The wind rises and blows

The day’s litter of news in the alleys”

Similarly, in the “Still, Citizen Sparrow“, he very beautifully presents the behaviour of modern man towards vulture. He addresses to sparrow, in order to manifest the importance of Vulture who has some value:

“Still citizen sparrow, this vulture which you call.

Unnatural, let him but lumber again to…”

Then again he defends vulture, when he says what matters if he is ugly, but he is the only bird who soars high in the sky and keeps nature clean. By pointing out the case of vulture, Wilbur throws light on the narrow approach of man who does not see beyond the surface reality. Who does know the importance and value of things and persons.

Secondly, it is important to note that each poem of Wilbur has an individual entity. It stands prominent and unique as far as dealing of theme is concerned. No idea is repeated in more than one poem. Every poem has separate theme, unique in itself.

Some of his poems are dramatic and have abrupt start. In the “Still citizen Sparrow”, he rebukes sparrow for thinking vulture as an ugly being. There is the element of suspense and mystery in his poetry a kind of mystery runs through his poems from start to end and the reader remains in stupendous trance. This poem has dramatic opening, colloquial and conversational style.

Besides, Wilbur’s poems are not very lengthy. There is brevity in language. Each poem is short but lucid and compact in contrast with Ashbery’s poetry. His poetry has thematic and structural unity.

Like Sylvia Plath, Wilbur too has used antithetical technique. There is a juxtaposition of light and darkness, life and death, the imagination and reality, consciousness and unconsciousness, movement and inactivity.

Wilbur’s poetry is remarkable for its visual and auditory imagery. As if we are listening to some music or visualizing something. The poem “Marginalia” is full of unique blend of auditory and visual imagery. In “Marginalia” it create dream like atmosphere.

Besides, Wilbur’s poetry has pictorial quality. It presents a combination of colours. “Marginalia” is the best example, for example “pine- leaves”, “bubbles”, “lily pads”, “textile scum”, “floor” give a vivid picture.

Wilbur also uses far-fetched imagery and conceits like other modern American poets. For example the image of sparrow for modern citizen, and the reference of deluge and Noah, He says:

“Thinking of Noah, childheart, try to forzet How for so many bedlam hours his saw soured the song of birds with its wheezy gnaw.”

Wilbur, like Robert Frost is in habit of choosing simple issue taken from life and then transform them into something philosophical and logical.

Furthermore, he has used several biblical or religious references and scientific theories also. In “Marginalia”, Wilbur has very skillfully presented the theory that life has centrifugal force. Things exert pressure towards their margins and boundaries. Nevertheless, very beautifully, scientific theory has been used to show philosophy of life to show man’s ambitious nature. He says:

“Things concentrate at the edges

Our riches are centrifugal”

It means things concentrate more towards borders. In the same way man’s wishes and desires also are unlimited, going out from his reach.

In “Still, Citizen Sparrow”, biblical reference has been used. Apparently poem is about the importance of vulture and his share in labour of Hazrat Noah but on the deeper level, poem is a satire to show modern man’s mentality and inclination towards surface reality. Very masterfully, Wilbur has used religious reference to give vent to his feelings about modern man’s behaviour and narrow – mindedness.

The use of the titles is also very suggestive it has king quality. Titles exemplify main theme inherent in poems very skillfully.

Wilbur’s approach is not subjective; his view is subjective as contrary to other modern American poets. His poems are running commentary on life and its bleak realities.

Last, but not the least, use of imagination is the most important feature of Wilbur’s poetry.

In a nutshell, Wilbur is a modern American poet as far as his themes and style is concerned. His poetry is not the poetry of a common poet, but appealing, striking and at the same time original. His themes transfer from reality to imagination at varying degree.