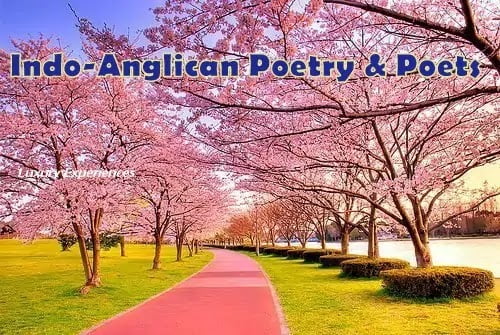 “The best Indo-Anglican poets have given us something which neither English poetry nor any of our English literature can give: in other words, they have effected a true marriage of Indian processes of poetic experiences with English formulae of verse experience.”

A team of pro essay writers affirm that the introduction of English education in India caused a tremendous ferment in the life and literature of the people. A whole world of new ideas was opened to them through the portals of English literature. Lord Bentinck’s decision to make English the medium of education in India was a momentous one. The inauguration of the Universities of Bombay, Calcutta and Madras in 1857 was the next landmark. As the new generation of India came out of the colleges and universities, English became the medium of thought and expression among the Indian Intelligentsia. It entered straight to the soul of Indian people. The first sign was found in the writing of English verse.

The growth of Indian poetry in English was a direct result of the British influence and rule of India. Early Indian poetry in English was a borrowed plume in every possible way. Right from syntax to sentiments everything was so imitative that it looked a perfect alien bride. Both in its inspiration and guidance it depended on England. Even the imagination was slavish.

The first among the Indo-Anglican poets was Henry Louis Vivian Derozio (1809-1831). Curiously enough, Derozio was not an In­dian in the real sense of the term, for his father was a Portuguese and if he had inherited from his Indian mother a love of India and a strong patriotic fervor, he had also inherited from his father’s side an equally strong prejudice against Indian culture and Hinduism. At the age of only nineteen he became the professor of poetry in Hindu College (Today’s Presidency College).He is being regarded the father of Indo-Anglican sonnet. His sonnets, The Harp of India and To India- My native Land, are regarded as fine examples of India’s earliest nationalistic poetry. His long narrative poem, The Fakir of Jangheera, describing the ill-fated life and adventures of Brahmin widow, Nuleeni. Derozio’s poetry shows a strong influence of the English Romantics, notably Byron and Scott.

Another pioneering Indo-Anglican poet was Kashiprasad Ghosh (1809-1873), who published Shair and Other Poems in 1830. The Shair relates the tragic story of a poet whose lady love dies and who, unable to bear the separation, throws himself into the sea. The poem is full of conventional description of nature and tedious moralizing.

Michael Madhusudan Dutt was more original and more spontaneous than Kashi Prasad Ghosh. He was a passionate admirer of Byron and sent poems to Blackwood’s Magazine dedicating them to William Wordsworth.  Two longer pieces, The Captive Ladie and Vision of Past and some sonnets and lyrics form his only writing in English verse. The Captive Ladie deals with the story of Prithvi Raj, the most romantic figure in the Rajput history. Vision of the Past is a slight sketch in the blank verse. It describes the primeval innocence, the Temptation of Man and his Fall in the form of visions.

Romesh Chander Dutt, civilian and economist, translated the Ramayana and the Mahabharata into felicitous English verse. He also published his Lays of Ancient India in 1894.

With Aru Dutt and Toru Dutt we reach the first truly significant chapter of fulfillment in the history of Indo- Anglican poetry. Both the precious sisters are gifted singers, but unfortunately fated to die an early death, when they were still hardly more than girls. Aru died in 1874 and Toru in 1877, aged twenty and twenty one respectively. The most significant aspect of Dutt’s literary career was her use of the rich Indian heritage of myth and folklore. In Ancient Ballads she converted popular stories from the Ramayana, Mahabharata and the Puranas into English verse. In this, she pioneered a way for several later Indian writers in English who had similar problems regarding their poetic identity. The best of these, probably, one of the best individual compositions in Indian poetry in English is Our Casuarina Tree. This poem, reminiscent in both form and content of Keats’ odes, is about memory, imagination and transcendence. The stories of Savitri and Sita, Dhruba and Prahlada, told so often before, are told again with new freshness and charm. Both Our Casuarina Tree and Baugmaree show Toru Dutta reaching a riper perfection. Edmund Gosse paid a glorious tribute to her when he wrote:

“When the history of English literature of our country comes to be written, there is sure to be a page in it, dedicated to his fragile exotic blossom of song.”

Manmohan Ghosh is unique among Indian writers of English verse. He buried himself in the study of classical European art and literature with the result that his poetry entirely Western in taste an allusion. During his lifetime just one collection of his poems, Love Songs and Elegies, was published in London by Elkin Mathews in the Shilling Garland series in 1898. He remained a dedicated poet and wrote a number of longer, more ambitious works including ‘Perseus‘, ‘The Gorgon Slayer’, ‘Nala and Damayanti’, ‘Orphic Mysteries’, ‘Immortal Eve’ and ‘Adam Alarmed in Paradise’.

Manmohan’s younger brother Aurobindo Ghosh was more than a poet; he was a patriot, philosopher, and yogi rolled into one. Sri Aurobindo had a record of poetic achievement without a parallel in our day. Urvasie and Love and Death are nobly articulate narrative poems, while Baji Prabhou is a first- rate poem of action. The Rose of God, The Golden Light, and Thought the Paraclete are among the finest mystical poems. His supreme achievement was Savitri, a colossal epic running to about 20000 lines. In Savitri he used the story of Savitri’s conquest of death in the Mahabharata – a story which has influenced Indians for centuries as an exposition of perfect womanhood – and expanded it to create his epic. A mystic and a seer, Aurobindo claimed to have described his own, palpable experiences in writing the poem.

Rabindra Nath Tagore is regarded as the Titan among the Indian writers of English verse. Though strictly speaking, Tagore wrote only one poem, ‘The Child’ (1931), in English, his own English renderings of his famous poem, Gitanjali (Songs Offering) (1912) won him the Nobel Prize for literature in 1913 and world – wide renown. After that, Tagore continued to “translate” several of his works into English, deviating considerably from the Bengali in the process. Tagore bestrides the world of Indian culture like a colossus.

Sarojini Naidu (1879 – 1949), the Nightingale of India, is among the most popular and accessible of Indian poets in English. Naidu’s poems are deliberately grounded in an anti – intellectual aesthetics of ephemeral beauty. She was primarily a lyric poet whose mastery of rhyme and meter is unmatched. Her poetical output contained in the volumes called The Golden Threshold (1905), The Bird of Time (1912), The Broken Wings (1917). These volumes are full of poignant feeling and picturesque Indian imagery. The chief quality of her poetry is melody – sound and sense combine to produce an emotion, as in music.

Harindranath Chattopadhyaya (1898 – 1989), brother of Sarojini Naidu showed great promise in his first collection, The Feast of Youth (1918). Both Tagore and Aurobindo were impressed by his talent. His another volumes are The Magic Tree, The Perfume of Earth, Grey Clouds and Coloured Garden etc.

There is no doubt that during the 1950’s the dominant tone in Indian poetry in English shifted. The impact was swift and sweeping. What had been a minority voice suddenly became that of the majority. A ready made aesthetic was available to the new poets – the modernism of Eliot and Pound, of Richards and Leavis and of Picasso and jazz music. This aesthetic found rapid acceptance in the disillusionment of the post – independence era. Instead of ushering in the promised golden age, independent India became a typical third world country, backward, corrupt and hypocritical. The new generation which had come of age in the 1950’s and 1960’s found itself betrayed by its elders.

Moraes chooses Babur as a persona to suggest his own sense of alienation from India; Jusawalla finds himself filled with revulsion and pai upon Approaching Santa Cruz Airport, Bombay, in Kamala Das’ The Sunshine Cat, An Introduction, the speaker castigates all the men who abused her, Ramanujan wonders if he is really himself in a characteristic self-reflexive “Self – Portrait”. Mehrotra resorts to a surrealistic subversion of meaning in very discontinuous “Continuities”; Parthasarthy’s Homecoming is loaded with self – criticism and loss; in Daruwalla’s Routine the police officer cynically prepares himself for another riot; Mahapatra’s Dawn at Puri links the temple at Puri with crows and skulls’ Chitre’s speaker regards his Father returning Home with dispassionate and ironic detachment. Kolhatkar turns the whole idea of the traditional pilgrimage inside out in Jejuri. The publication of, in 1976, of Arvinda Krishna Mehrotra’s Nine Enclosures, Gieve Patel’s How Do You Withstand, Body, and Adil Jassawalla’s Missing Person by a Bombay Clearing House shows promise that high quality of Indo- English poetry is being produced still today.

The firmly rooted in their own cultural milieu and conscious of their poetic identity, the new Indian writers of English poetry delve into the myths, legends, superstitions and folklore of English poetry to express the contemporary social reality. Indian poetry in English is thus only occasionally poetry and only sometimes poetry. This leads to another strain of thought that – why must Indian poetry in English be always “Indian” to establish a nationality.  According to H.W. Longfellow

“Nationality literature is good, but universality is better.”

It is always easy to tear a poem to pieces or deconstruct it but to understand a poem, or respond to it at several levels calls for approaches which are more constructive or creative and this should be the guiding principle of one’s approach to the study of Indian English poetry old or new.

1 thought on “Indian English Poetry and Poets: An Essay”