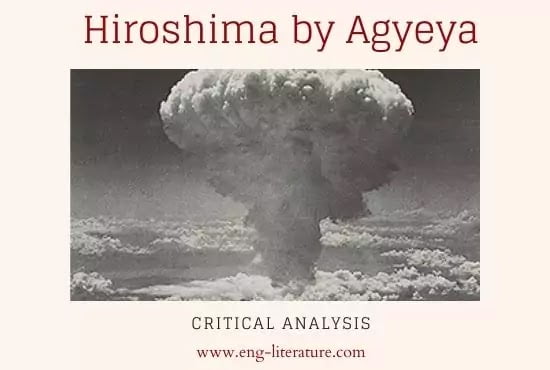 Hiroshima is a modern poem by S. H. Vatsyayan ‘Agyeya’. It deals with the humanistic and socialistic leanings of the poet towards the measurable plight of the innocent people of Hiroshima, a city of Japan where the atom bomb was dropped by America. It also shows the brutality of human being, the unwanted carnage caused by the hotty and self-centered politicians, the horrible and incredible human brutality and butchery against humanity. In technique and style the poem has modern tone and temper full of hard and solid images which remind us of T. S. Eliot, Ezra Pound, Hopkins and Auden and other war poets.

In order to understand the poem, one should go to the background of the history related to the bombardment of America on the two important cities of Japan-Hiroshima and Nagasaki during the Second World War. These two cities have become today memorable because of the naked dance of death of human being towards human being or the indiscriminate use of arms and ammunition. We know that during the Second World War America wants to get a very early conquest and its dominance over the Japan it dropped atom bombs without knowing anything about its consequence on the two great cities of Japan. As a result many people consigned to ashes, their dwellings demolished, their dreams and aspirations shattered to nothingness and the whole activity of the city reduced to the dust. This traumatic experience has been haunting not only the people of these two cities but also the whole world. Based on this theme the poem is very interesting in matter and manner, feeling and form.

The very opening of the poem is figurative and connotative. It shows irony and contrast which are the two important tools of modern poetry. The poet says:

“On this day, the sun

Appeared-no, not slowly over the horizon

But right in the city square.”

Here in this stanza the poet takes the image of the bright sun; but the sun here is not the natural sun rising in the cast daily for giving life to the whole world and driving the darkness away from the world. The sun here refers to the man-made sun caused by the pouring down of atom bombs. Just like the sun, the atom bombs also emit bright rays: but the rays are not the fruitful rays of the sun giving health and energy to both men and plants. Here the rays engendered by the bombs thrashed and butchered the whole humanity within a second. The phrase ‘right in the city square shows the dropping of the bomb in the middle of the town generally the centre for people’s entertainment and their strolling, In the natural process the sun generally appears in the east and it slowly and slowly comes over the horizon. But here the case is just the opposite. The sun here never comes slowly but very speedily and that too in the very middle of the city. Thus here the comparison is very appropriate and interesting.

The poet says that there was a great blast caused by the dazzle not from the middle sky but from the earth which is turned raggedly open. After the bombardment the situation was very apocalyptic rendering the people homeless and making their life even worse than animal. People and their objects as well as their dwelling places where dazed and lost and pitched in every direction. This measurable and pathetic plight of the general people have been shown by the skilled poet with some beautiful words and diction, images and symbols :

in every direction : this blaze

Not risen from the east

Smashed in the city’s heart-

Here in this stanza some words and phrases are highly suggestive. The phrase “human shadows” is highly suggestive. It shows various layers of meaning. At first it suggests how human beings of the city were turned to shadows that are, turned to death. Secondly, it stands for the dark shadow of the whole human being who boasts of the great civilization and culture. It also suggests the self centered egomaniac politicians who seldom feel the qualm of conscience in dropping out the bombs on the innocent people. This phrase also presents a contrast to the natural sun. Generally when the sun is over our head in the sky there is a shadow of our body created by the light of the sun. But here the human shadows are dazed and lost. In other words there were no men so there were no shadows. The phrase “Death’s swart suncar’ is also very connotative. It connotes how the atomic blast is just like the wheels of the sun causing violent death all over.

The next stanza of the poem is even more ironic and thought provoking. The poet says that during the dance of the death in the middle of the Hiroshima city, the sun rises and sets in a very short time. As a result all the visions, dreams and aspirations of human being were smashed to pieces.

“Instant of a Sun’s rise and set.

The implied meaning is that the terrible blast of the bomb flashed out very suddenly and also subsided in a moment. So both the rising and the setting of the sun were done within a very short period of time. We know that the sun generally rises in the morning and sets in the evening but here in this city of Hiroshima, this whole process of the sun from morning to evening were confined to few seconds at noon of the day. This is why the poet uses the phrase ‘one compressed noon’. This phrase also shows the cruel and inhuman activity of human being to change the rule of nature. This reminds us of William Wordsworth, a great poet of Romantic School of poetry, who once says,

“To her fare works did nature link

the human soul that through me ran

but much it grieved my heart to think

what man has made of man.”

This brutal activity of human being without any rhyme or reason also very similar to the description made by G. B. Shaw in Arms the Man and Hemingway in ‘A Farewell to Arms‘.

The extended metaphor of the sun has been again very beautifully used in the next stanza in which the poet says that it was not human shadows that lengthened, paled and died. The only shadows that stay are the shadows of the burning rocks and stones of these vacant streets :

It was not human shadows that lengthened, paled and died;

It was men suddenly become as mist then gone.

Burned on rocks, stones of these vacant streets.”

This poetic and metaphoric description present a very realistic picture of that situation caused by the atom bombs. The poet is of the opinion that all men of the city were died as suddenly as the mist. In the natural process of the day, the heat of the sun dries the mist on the blades of the grass but here this man-made fears and horrible bomb end of the life of man within a very few minutes. The only thing that stays in this city is the shadows. Again, here the term, ‘shadow’ has got a number of meanings. At first it suggests the dark aspects of that satiric behaviour of man. It also denotes the stain and scar made by the merciless mankind towards the innocent mankind. This dark shadows have haunted the civilization and is still haunting and will be haunted in the next generation. So the only thing that stays today is the shadows. On the second scale of meaning the shadows here also denotes the shadow caused by the flame of the burning rock and stones of the vacant streets as there were no people in the city.

The last stanza again extents the image of sun, light and shadow with contrast and irony. The poet says,

“A Sun conjured by men converted men to air, to nothing;

White shadows singed on the black rock give back man’s

These last lines of the poem convey the poet’s message to such men who were tempted by the power and authority, fame and popularity. It also shows how it was a great folly of human being to destroy the other human being. Here the phrase ‘A Sun’ doesn’t denote the God-made sun made for the welfare of the whole flora and fauna. Here ‘A Sun with indefinite article ‘A’ and not the definite article the shows the indefinite fate of human being bound to be shattered in the days to come if man keeps on making such type of Sun’s for the annihilation of human being. So, it is the message of the poet that such type of sun or bomb conjured by men will do nothing but to convert men to air or to nothingness. The phrase “White shadows’ is very ironic in this context. It suggests the so-called modern materialistic development of modern science for which men are always brasting and braging on their achievements. But truly speaking this white shadows or the modern generation is burning slightly on the black rock made by men. So the witness of this great havoc and tragedy done on the innocent people directly go to the modern man who is quite insensitive and cold to nature and to his own human brethren.