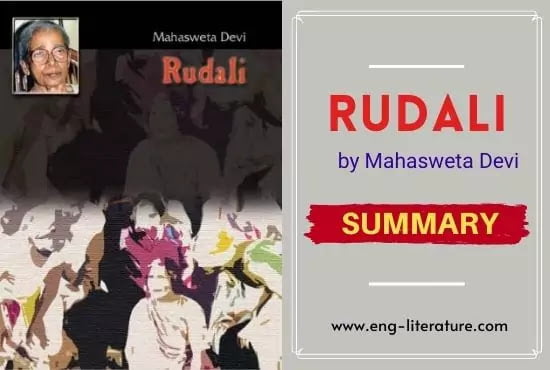 Rudali is a famous story by Mahasweta Devi that has attracted the attention of readers and critics alike. The narrative revolves around a poor woman from lower strata of society. She is Sanichari, one born on Saturday. Her name itself suggests her present plight where there is no place for joy or celebration. She is an unlucky woman whose presence is not considered auspicious. She is a woman, a low-caste woman and born on Saturday- she is doubly oppressed.

Sanichari is an epitome of suffering and pain. She is a professional mourner, one who wails and mourns on the death of anyone. She is hired for mourning by the rich people. Whenever someone dies among the rich, she is delighted because it is the time to earn money. In her personal life, she has lost her relatives, son, husband but no tears come into her eyes. She has to shed tears for others. Here, the writer employs Irony as a powerful device to enhance the emotional impact of the story.

Sanichari along with her sister-in-law has to perform the last rites before daybreak to avoid bearing the cost of repentance rites for keeping the corpse in the house overnight.

Perhaps the most trying moments in Sanichari’s life come about when she realized that Budhua, her son is dying before her eyes having contracted tuberculosis. The story becomes stunningly poignant here. Sanichari’s suffering is interminable. Even little dreams of Sanichari like buying a wooden comb and wearing shellac bangles for a full year could not be realized. She begins to wonder whether she has been dreaming too big.

A fresh chapter begins in Sanichari’s life now. She suddenly meets Bhikhni, her childhood playmate after years. Settling down under a peepal tree, eying each other closely, each relaxes “in a realization that the other was no better than herself. Like Sanichari, Bhikhni’s wrists, throat and forehead show no pieces of jewellery other than blue tattoo marks, both wear pieces of cork in their ears instead of earrings, their hair are rough and ungroomed.” When Sanichari learns that Bhikhni has nowhere to go and has been deserted by her son, who lives with his in-laws now, she offers her the warmth of her own hut.

Helping and sustaining each other, the two women forge strong bonds. When twenty rupees Bhikhni had, is used up, the women see starvation staring them in the face. They go to Dulan, who shows them the way. “As long as there’s a way of earning, why should anyone die of starvation?” He impresses upon the women to do anything to fill their hungry stomach:

The story progresses in a sardonic vein, referring to the hypocrisy of the rich landlords, who would rather spend huge amounts on the funerals of their dear ones than on the medicines and life saving injections for them. Competing with each other to show off their wealth at the funeral ceremony, they defy all the norms of decency as well as commitment in human relationships. Nathuni Singh’s mother, who is on her death bed, is not given any treatment whatsoever,

“No hakim, no kabiraj, no doctor. No herbal remedies, no injections. She’s still alive. Meanwhile he’s stocking up on sandalwood and salwood for a sensational funeral pyre… . He’s not willing to spend a paisa trying to cure her, but plans to spend thirty thousand on funeral.”

Nathuni’s middle wife, who is the daughter of a rich man, overhearing the eldest wife, sneers:

“May my father live long-but when he dies, then I’ll show everyone how a kriya should be held.”

The story, describing the middle wife as “really virtuous” becomes profoundly ironic: “Her words were heard by gods”, and soon after her father was stricken by smallpox. The middle wife then sends for Sanichari, promises her handsome remuneration on completing the job well and says:

“My father’s cremation and kriya will be the stuff legends are made of. Everyone will talk about it. I want my husband and co-wives to burn with jealousy.”

Mohar Singh, the father of the middle wife dies. Sanichari and Bhikhni perform reports job with Elan, getting many good things in return. Sanichari reports her good fortune to Dulan, who gives her a hint that she can form a union of rudalis and become their president, once again asking her to coax the whores to join her. Sanichari and Bhikhni are treated respectfully by the whores and their life settles into a rhythm. Soon it is learnt that Gambhir Singh, a rich landlord is dying. His nephew is his only heir. Gambhir Singh refuses to leave any money behind for his nephew, who has isolated him in a shack in the yard. He instructs his lawyer to spend at least a lakh on his kriya.

Meanwhile Bhikhni informs Sanichari that she will make a quick trip to Ranchi to attend the wedding of her nephew-in-law’s daughter who met her at the marketplace. Even her son would not realize that it’s him Bhikhni has gone to see. Knowing the agony of a mother’s heart, Sanichari agrees to Bhikhni’s proposed visit to her nephew-in-law’s house. Promising Sanichari that she would be back in four days, Bhikhni boards a bus to Ranchi.

Dulan persuades her to go to the whores herself. She has to take over from Bhikhni now. He convinces Sanichari that for the poor, the sense of right or wrong is meaningless. Sarcastically, he comments that such things are best left to the rich because the poor “understand hunger.” As Sanichari asks for directions to the red-light area, she does not feel a trace of embarrassment:

“Considerations of the stomach are more important than anything else.”

The story ends with an emphasis on women who had been forced to become whores for some reason or the other.

Like other stories of Mahasweta Devi, Rudali too ends on a note of assertion, which the deprived community of these women is able to voice. Sanichari knows by now the economics of the profession of rudalis. She knows, hitting their heads on the ground would mean double the amount of money.