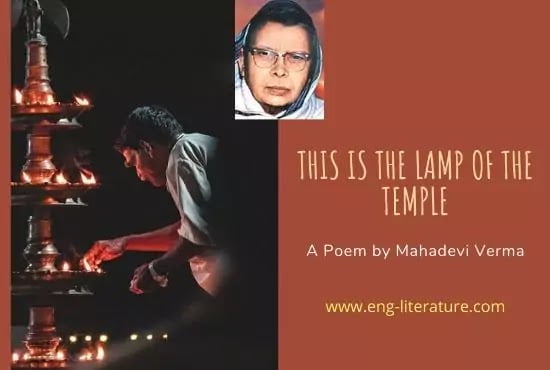 “This is the Lamp of the Temple” is a symbolic poem by Mahadevi Verma, a great poetess of Chhayavad. In theme it deals with a great mystical and metaphysical theme of the inner consciousness of human being which has been imagined as a continuous lamp. The poetess has also imagined this world as a great temple where the devotees should go with great devotion and reverence. In technique the poem is full of various beautiful images and symbols which are highly suggestive and symbolic. At some places, words have been used in such a way that the sound suggests the sense.

The image of lamp which the poetess has taken for the individual soul is very suggestive as well as interesting. It reminds us of the number of great writers, poets and philosophers who have made use of this symbol very beautifully and successfully. Lord Buddha says: “Be like a lamp” (Aatma Deepo Bhavah). Bible says “Know thou thyself”.

In the first stanza the poetess says that this world is a great temple and she is the lamp burning continuously. So, it is her ardent wish to let it burn alone. Here the word ‘alone is very suggestive. We know that aloneness plays a very important role in the life of Mahadevi Verma. In her imaginative utopian world there is none but she and her lover (spiritual lover) which symbolizes God or her own inner consciousness. Further the poetess says that it is the time of Aarti or prayer so hundreds of devotees gathered there to offer their prayer. The temple is reverberated with the sound of the conch, the symbols and the golden flute and Veena. The multitude of singing voices also filled the air with the sound of prayer.

Here in this first stanza we get two types of sound the sound the musical instrument and the sound engendered by the multitudes. All these sound remind the poetess to be a lamp burning alone.

On the spiritual level the ‘stony darkness’ stands for the great spiritual darkness which a saint wants to achieve by annihilating ‘iamness’ and physical attachments. Perhaps this is why Mahadevi Verma has use the word ‘joyously’ for darkness. This is what we call mysticism. Here this darkness reminds us of Keats’ famous phrases ’embalmed darkness’ and ‘verdurous glooms’. In other words here Mahadevi Verma means to say that when man behaves like a lamp burning itself for giving light to others, his body and mind becomes pure giving aside to all the five senses so as to merge itself fully to the ultimate reality or the eternal truth. After getting the supreme truth or the supreme bliss, his darkness is no longer darkness but it becomes luminous light or vice versa. In Srimad Bhagvad Gita, this state of mind is known as ‘steadfastness’ (stithyaprajna).

The second stanza is again very spiritual and mystical full of very beautiful images and symbols. The ground of the temple has become golden by the footprints of the devotees. The threshold which is made of sandal wood has become worn-out by the bowed foreheads. The temple ground is also filled with the strewn flowers, white rice grains, burned incense and sweet offerings. The poetess holds the opinion that all these outward forms of worshipping God will be observed in God who is synonym to both light and darkness.

Here in the stanza the poetess presents two types of offering to the Almighty God. The first is to go to the temple with forehead keeping with flowers, rice grains, frankincense and offerings. This is the outward form of adoring God in the temple second way is to burn the lamp of the soul continuously for annihilating the darkness of the body and also the emptiness of the world. Here Mahadevi Verma seems to be in favour of the later one and so she prays God to let all these prayers dwell in the flame. The phrase “bowed foreheads” stands for the reverence and worship of the people for God living in the statue. Here she seems to be all those forms of superficial worship of the people who pay visit to various religious places without changing their corrupted mind. She seems to suggest that service to the suffering humanity is the real worship of God. It reminds us of various couplets and poems of Kabir and Ruidash who lay much stress on diving deep into the great ocean of soul for churning out the real truth.

The third stanza of this poem develops the same idea with some other beautiful images and symbols. The poetess says that the people of the whole world are in great slumbers because they have been worshipping by dint of telling the beads of time. All the prayers of the past and the present and their echoes have seen lost amidst the stones. The poet is of the view that life is just like a samaadhi of breathers meant for becoming a path to the ocean of darkness. So after stopping the vocal vibration of particles this new living form is needed to be moulded once again in this great flame of self-consciousness (Aatmabodh).

The phrase “worshipping world” is a very fine example of the figure transferred’ epithet. Here it stands for those people of the world who believed in worshipping the Lord (God) by telling the beads and chanting the name a number of times. The word “slumber” has been connotatively used here. It stands for the darkness of human life, the darkness engendered by the five senses, the darkness if hypocrisy, ostentation, malignity of mind, so on and so forth.

Similarly the word “stones” has also multiple of meanings. It stands for the stone of the temples and also the standness of the temples. The word ‘echoes’ and ‘stones’ also remind us of the second chapter of A Passage to India entitled caves’ by E M. Forster. The stones also show nothingness or fruitlessness. In other words the poetess holds the view that simply telling the beads and worshipping the statue of the temple without annihilating the evils of five senses, all our efforts will be lost without any meaning. Here it reminds us of the various speeches of Swami Vivekananda who is more in favour of service to humanity than to chant the name of lords.

The comparison of life to a samadhi is very suggestive and mystical. We know that samadhi is the lost step of yoga by which the practitioner of yoga is able to attain the supreme bliss by annihilating all the bondage of life. At this stage of samadhi man becomes enlightened enough to be a path to the ocean of darkness. So again it is the great wish of the poetess to let the living form be moulded once again in the great flame of eternal truth.

The last stanza sums up the whole findings of Mahadevi Verma in a very cryptic and symbolic way. She says that in the night the wind has lost its way, the night itself has fallen into a deep faint. The only thing which is awake is the little light which has been compared to the guard of the temple. Now in this darkness of night the little lamp is the priest of God but here the lamp is burning not with the help of oil but with the help of faith and so it is able to spread its ray of light everywhere. This lamp will keep awake every moment till the bustle of the day returns. This lamp is the messenger of evening. So the poetess ardent desire is to let it burn till the morning prayers.

Here in this stanza the lost of the wind stands for the lost of the real path of the human being. The sentence the night has fallen into a deep faint is an example of transferred epithet. Here it is not the night but the deviated people of this world have fallen into a deep faint. The comparison of the lamp to the priest is very suggestive. As a true priest is fully devoted to the temple, so the lamp is very much devoted to burning itself continuously in the dead of night. Our human soul is very much near to this little sentinel of light that guides again and again to the deviating body, for this what is needed most is the oil of faith to oneself and so for that matter the ultimate truth or God. The poetess lays much stress on awaking every moment so that the discontinuous lamp should not be put out. It reminds us of what R. N. Tagore says :

“A lamp can never light another lamp unless it continues to burn with its own flame.”

Thus we see that the poem is very symbolic, spiritual, moral and philosophical. The beauty of the poem lies in the presentation of some powerful metaphors and simile which are highly connotative. Some of the metaphors of this poem remind us of William Shakespeare about whom it is rightly said that ‘To Shakespeare metaphor is not the dress of thought but the thought itself”. This is exactly what we find in this poem.