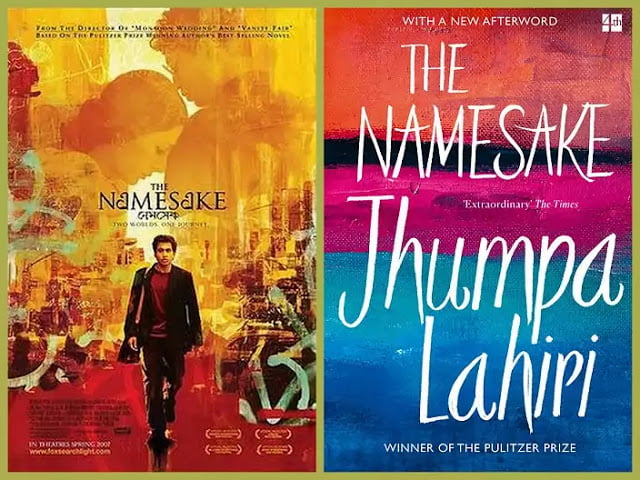 Crowned by Pulitzer Award in the year 2000 for ‘Interpretation of Maladies’, a collection of short-stories, ‘The Namesake’ is Jhumpa Lahiri’s first attempt in the field of novel.

The Namesake undoubtedly becomes a MUST READ for every individual, irrespective of their nationality and culture and creed. ‘The Namesake’ beautifully enacts the lives of the Ganguly family across generations for us. The story is filled with simplicity and confusion of the family estranged from its roots.

‘The Namesake’ has been made into a movie by the same name by Mira Nair, starring Irrfan Khan, Tabu and Kal Penn. It includes a modern frolic adaptation of the age old top charter “Ye mera deewanapan hai.”

The Ganguli couple move to Cambridge, Massachusetts after their arranged marriage. The book takes us through their difficult transformation from Indian way of living into the everyday American lifestyle – the contrast in thoughts, ideologies, and experiences as a foreigner. The family is torn between the old family traditions and adapting to the new American way of life. The husband adjusts everything much better than his wife does. The wife refuses and resists everything American and constantly longs for her family

Based on Jhumpa Lahiri’s acclaimed novel, THE NAMESAKE is a heartfelt depiction of two generations of a Bengali-American family. At the center of the story is Gogol Ganguli (Kal Penn), the oddly named son of a professor and his traditional Indian wife. He’s late to his high-school graduation party because he’s passing around a joint with his best pals. And after graduating from Yale, he prefers to hang out with his Manhattan-bred (read: “white”) girlfriend and her wealthy parents than visit his parents in Westchester.

But an unexpected tragedy forces him to return to his home, both physically and emotionally. In dealing with his intense grief, Gogol rediscovers the meaning of his name, which is tied not only to the Russian author his father admired but a life-changing event in his father’s life. Gogol’s reexamination leads him to a new life with a fiercely modern — but still Bengali — wife and a deeper appreciation for his parents.

Jhumpa Lahiri, through her lucid writing makes Gogol and his family come alive among us, as the family next door or far off relatives. She succeeds in painting a subtle canvas of life in “a string of accidents, events unforeseen and unintended”, making them fluid and accessible to the readers. Her eye for details makes the book picturesque for us to read.