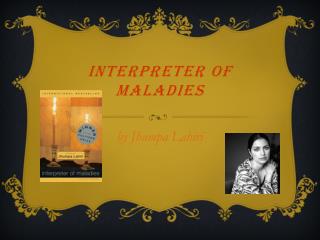 Jhumpa Lahiri is an Indian American author who compiled nine short stories into a collection by the name “Interpreter of Maladies”. These stories basically depict cultural differences between India and America and the problems that are faced by the characters due to these cultural changes. Each story reveals interesting aspects of human emotions and behaviors. Out of these nine stories is Mrs. Sen’s. It is a story about isolation of the main character Mrs. Sen and her different experiences especially while she babysits Elliot at her own home.

It is September. Eliot, eleven years old, is used to having adults look after him after school. This year he goes to Mrs. Sen‘s after school, because she cannot drive and watch him at his own house.

During the first meeting between Eliot, his mother and the Sens, Mrs. Sen introduces herself and her husband, who teaches mathematics at the university. Their apartment seems like a transient residence, with plastic covering the some of the furniture.

Eliot’s mother asks the Sens questions. She is concerned with Mrs. Sen‘s inability to drive, and Mr. Sen predicts that she will have a license in December.

Eliot rather enjoys Mrs. Sen‘s. Her apartment was warmer than his house. He learn to remove his shoes upon entering the apartment. He enjoys watching her prepare food, with special dishes and particular vegetables. She tells Eliot about Indian traditions. She feels isolated at home, compared to home, India, where the entire neighborhood was in tune to each other’s needs. Eliot understands her in the curious, cautious way of a polite child. She explains her traditions to him, and he helps her.

Every day, there is an elaborate food preparation ceremony, which the cheap surroundings do not do justice. And at the end of every day, she insists on inviting Eliot’s mother in for refreshments. His mother is insensitive to Indian tradition.

Mrs. Sen always comes to pick Eliot up from the school bus, eager but contained. She is always dressed and groomed immaculately. Every day she practices driving, and takes Eliot with her because she is afraid. She asks him questions that reveal her insecurity and unhappiness about living in the United States. She is a very distracted and hesitant driver. Eliot comforts her.

Eliot notes that two things make Mrs. Sen happy. The first was letters from her family in India, which seemed to transform her momentarily. This made her so happy they would leave the apartment, exploring the campus. She would tell Eliot about her family. She is sad that Eliot must spend so much time apart from his mother. The second thing was fish from the seaside, which she used to have twice a day in India. Every day she calls the supermarket to see if they have a whole fish in stock, and asks to reserve it for Mr. Sen to pick up.

One day, Mr. Sen is busy at work and tells Mrs. Sen he cannot pick up the fish. Eliot finds Mrs. Sen on the sofa, weeping. She takes him into her bedroom and shows him all the saris she never gets to wear. She cries, saying that her friends back home thinks she leads an extravagant life. Mr. Sen shows up and drives Eliot and Mrs. Sen to the fish market. She buys fish and prepares them carefully at home.

In November, Mrs. Sen becomes depressed. She paces the apartment and listens to a farewell tape her family has made her in India. She tells Eliot that her grandfather has died. A week later, she starts cooking again. One day, Mr. Sen takes Eliot and Mrs. Sen to the seaside. They go to the fish market, and this time Mr. Sen makes the purchases. They go to a seaside restaurant and the beach and Mrs. Sen enjoys herself immensely. The outing reminds her of India.

At the end of the day, Mr. Sen insists that Mrs. Sen drive home. She was fine at first, but when they approached a busy road she pulled over. From then, she refuses to drive. Instead, one day she takes the bus with Eliot to the fish shop. On the way back, the driver makes Mrs. Sen feel like a foreigner as he asks her to open the window to air out the fish smell.

One day, the shop owner informs Mrs. Sen by phone that they have good fish. She calls Mr. Sen to ask him to pick some up, but he does not answer, so she decides to get them herself. On the way to the shop, they have an accident. The damage is light. Mr. Sen picks them up. Mrs. Sen locks herself in her bedroom. When Eliot’s mother comes to pick him up, Mr. Sen reimburses her for November’s pay. From then on, Eliot returns home after school, alone.