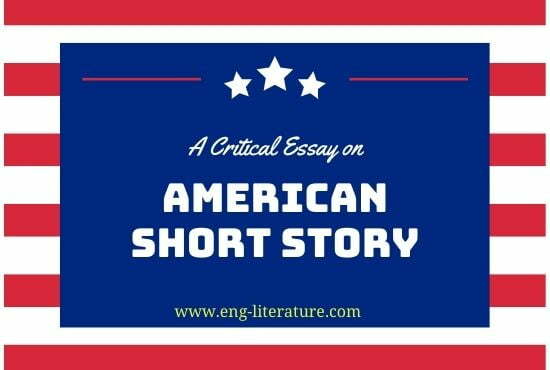 A short story, a brief fictional prose narrative, usually of indeterminate length, is to be strongly distinguished from longer, more expansive narrative forms such as the novel, epic, saga, and romance. The growth and development of American literature short story journeys through the cultural consciousness of American society. German authors like Wilhelm Kleist and E.T.A. Hoffmann acted as influencer to build the niche of American short story.

From Puritanism to Post-Modernism, America has shown thousands of literary experimentations particularly in the criticism, novels, dramas, poetry, short stories and so on. Several story-types were assimilated to give birth to practically a new product-the popular “Short story” of the 19th century. Opinion varies as to which particular author is actual inventor. Washington Irving is regarded as the father of American short story. Washington Irving (1783-1859) amid his periodical sketches (“The Sketch Book’ and ‘The Tales of a Traveler”), produced stories like ‘Rip Van Winkle’ and ‘The Legend of Sleepy Hollow”, with a structure well-balanced and restrained.

In seeking the inventor, we may trace back to Hawthorne (1804-1864) or Poe (1809-1849) beginning in the 1830’s, ten years after the appearance of Irving’s ‘The Sketch Book’. Significantly both found recognition in this field through minor periodicals. Hawthorne got fame by the publication of ‘The Gentle Boy’ and ‘Boston Token’, Poe by winning a prize from ‘The Saturday Visitor’ (Baltimore) with ‘The MS. Found in a Bottle’. Gloom and Supernaturalism were their workshops. Hawthorne’s art can be understood best through acquaintance with his ‘American Notebooks’.

Edgar Allan Poe put much of theory into a criticism of Hawthorne’s tales, printed in ‘Graham Magazine’ for May, 1842. In Hawthorne, the result is often philosophizing sketches that are scarcely stories at all, but rather essay of the 18th C type. In Poe, there is a corresponding fondness for the remote and fantastic, sometimes even characterized as ‘fable’ and ‘parable’. Hawthorne is often weak in building up or sustaining a plot but Poe carries his principle of studied invention so far that the very artistry of his plots seems artificial.

They both aim to arrive at the effect of realism. The former, however unusual his situations, puts into them characters that he has studied deeply and in detail, so that we recognize them as human, like ourselves Poe’s people, when individualized at all, are likely to be more replicas of his own moods, and sadly lacking in the former’s variety. Poe’s realism indeed, lies largely in his style. This at times is ornate and artificial. There are unconscious details of the manner of Defoe, coupled with the picturesque of description activities later by Stevenson, this is seen in all his best stories, particularly, ‘The Gold Bug’ and ‘The Cask of Amontillado‘ and is of peculiar service in his tales of mystery and crime.

Poe’s activity extended exactly to the middle of the century, and Hawthorne lived until 1864. By the latter date the stories of both of them had become fixed in many American minds as models or set-patterns of a new structure-in fiction. Naturally various American writers diligently set about imitating these role-models.

Poe deciphered the craft of this powerful fictional genre in his Review of ‘Twice-Told Tales’.

Poe’s tales have wider suggestions and possibilities. There are the tales of ratiocination or the analytical stories such as ‘The Gold Bug’ or ‘Murders in the Rue Morgue’ the tales of mystery and occultism or horror and death as ‘Ligeia’ and ‘The Fall of the House of Usher’. Pseudo-scientific tales or tales of marvelous adventures like ‘Mr. Found in a Bottle’ or ‘The Descent into the Maelstrom’; there are also tales of fantasy and extravagance such as ‘Eleanora‘ or ‘The Devil in the Belfry.’

Poe considered himself, to be the writer of some of the finest tales (which) are tales of ratiocination. His main forte is in detection of mysteries, remaining as the guiding principle of Sir Arthur Conan Doyle. Like Dostoevsky, Poe ventured into psychic analysis and study of the portraits of abnormality. Thus his stories remain a stepping stone for a varied range of practitioners.

A poet of the merit of ‘The Raven’ and others, he believed that a tale should have unity of effect and that everything else should be subordinated to this unity. He supposed ‘Ligeia’ to be his best story. From the stylistic point of view, ‘The Mosque of the Red Death’, is his finest work. He gave mathematical logic to the metaphysics of supernatural world, with a genuine interest in science. He favoured art for art’s sake. H. G Wells and Jules Verne owe much to his tales.

In Hawthorne’s writings there are three characteristics that impress themselves upon the reader-his sense of mystery, his gift of fantasy, his intellectual detachment. He himself felt that he was “a lover of brown twilight”. His genius has the fragrance of nocturnal flowers Poe was also a lover of the twilight; but it was a grey, brooding on full of strange unrest, while the former loved a restful atmosphere. Hawthorne has not the uncanny magic of Poe, it eschews the merely grotesque and horrible. It seeks only to reveal the unfamiliar side of familiar things; to put ordinary life in an unusual setting, His gossamer fancies are spun like the spider’s web out of his own self. Shorn of romantic surrounding, he achieves his highest triumphs. There is a cool, inquisitive intellect. He has the hand of the artist, but the soul of the scientist. Detachment is his penchant, characteristic of his subtle and elusive genius. Poe externalized his sorrows; Hawthorne spiritualized them. Hawthorne stimulates our imagination: Poe sears it. If Hawthorne represents sanity; Poe morbidity.

Kate Chopin (Pron. Sho-Pan), original name Katherine O’Flaherty (1851-1904) is an American author and local colourist known as an interpreter of New Orleans culture. There was a revival of interest in Chopin in the late 20th century because her concerns about the freedom of women foreshadowed later feminist literary themes.

Chopin lived in Louisiana after her marriage (1870) to Oscar Chopin; after his death she began to write about the Creole and Cajun, people she had observed in the South. Her first novel ‘At Fault’ (1890), was distinguished, but she was later acclaimed for her finely crafted short stories, of which she wrote more than 100. Two of these stories, ‘Désirée’s Baby’ and ‘Madame Celestin’s Divorce’, continue to be widely anthologized.

In 1899 Chopin published ‘The Awakening’, a realistic novel about the sexual and artistic awakening of a young mother who abandons her family and eventually commits suicide. This work roundly condemned in its time, later received critical approval for the beauty of its writing and for its modern sensibility.

Her stories were collected in ‘Bayoce Folk’ (1894) and ‘A Night in Acadie’ (1897). She was capable to establish her as a leading exponent of the local colour school, showing the influence of Guy de Maupassant.

The prescribed text of ‘Regret’ was first published in the ‘Century’ magazine in 1985. The continual diurnal and nocturnal struggles of contemporary common women are painted by her to establish an identity and idiom of their own. The sexual appetite, motherhood and childbirth find location in her works. She had interest in painting, music, description of the dresses and food habits of her characters. With the help of extensive use of local dialects, French expressions, she explored the women-wood from the feminist standpoint, clothed in apt symbols and images.

O. Henry (1862–1910), with the pseudonym of William Sydney Porter, is an American short story writer whose tales romanticized the commonplace in particular the life of ordinary people in New York City. His stories expressed the effect of coincidence on character through humour, grim or ironic, and often had surprise endings, a device that became identified with his name and cost him critical favour when its vogue had passed.

Porter began writing sketches about 1887, and in 1894 he started a humourous weekly, ‘The Rolling Stone’. When the venture failed, he joined the ‘Houston Post’ as reporter, columnist, and occasional cartoonist. Convicted of embezzling bank funds, he entered prison, where he wrote to earn money for support of his daughter, Margaret. His stories of adventure in U.S. Southwest and in Central America were immediately popular with magazine readers, and by the time he emerged from prison. W.S. Porter had became O. Henry. In 1902 he arrived in New York City. From December 1903 to January 1906, he produced a story a week for the New York “World’, writing also for magazines. Both ‘The Four Million’ (1906), which included his well-known stories, ‘The Gift of the Magi’ and ‘The Furnished Room’, and ‘The Trimmed Lamp’ (1907), which included ‘The Last Leaf”, explored the lives of multitudes of New York in their daily routines and searching for romance and adventure. ‘Heart of the West’ (1907) presented accurate and fascinating tales of the Texas range. He then carried on his literary activity rapidly. Despite his popularity, O. Henry’s final years were marred by ill health, a desperate financial struggle, and alcoholism.

His style is remarkable for ‘twist ending’. The decay of romanticism hailed him to the coming realism. Ordinary run of men and women, clerks, policeman, Jim, Della, poor painters, Sue, Joanna, Behrman and many meet in his theater of the democratic People.

John Ernst Steinbeck (1902-68), a popular American novelist, and a Nobel Laureate, is best known for “The Grapes of Wrath’ (1939), one of several naturalistic novels with Proletarian themes that he wrote in the 1930s. His volume ‘The Pastures of Heaven’ (1932), a collection of short stories portray the people of a farm community in a California valley. His other works are ‘In Dubious Battle’ (1936), “Of Mice and Men’ (1937). “The Long Valley’ (1938), “The Red Pony’ (1937). His later activities included a research expedition to the Galapagoes Islands, serving for a period during World War II as a foreign correspondent, and taking a journey through the Soviet Union with the photographer Robert Capa. His later works’ are — The Pearl’ (1948), “The Wayward Bus’ (1947), ‘Sweet Thursday’ (1954), ‘Burning Bright (1950), ‘East of Eden (1952) and many others.

His realistic landscapes are also often symbolic, as in the opening paragraphs of “The Chrysanthemums“, one of his finest stories. It vividly explains and explores Steinbeck’s virtues as a writer through its sensitive revelation of a young housewife’s ambivalent feelings about herself and her role in a male-oriented society. The human essence in his short story lies deep-rooted in his exhibiting “a manly and unsentimental pity for those that suffer alone.”