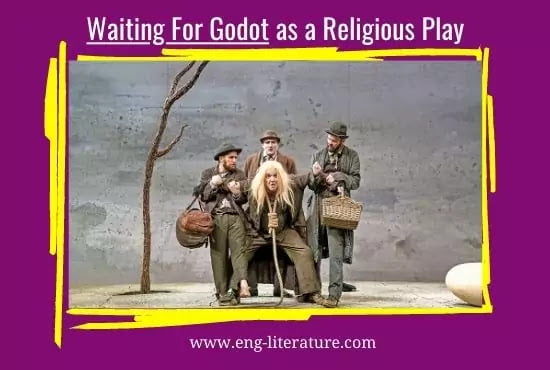 Waiting for Godot as a Religious Play

Waiting for Godot, an absurd drama as it is, has an unmistakably religious element. When Beckett was once asked to comment on the play Waiting for Godot, he quoted from St. Augustine: “Do not despair: one of the thieves was saved. Do not presume: one of the thieves was damned”. This is a significant statement and may be regarded as a clue to the play.

Not Waiting for Godot alone, the other plays are also imbued with deep religious fervour. For Beckett God has not failed. There is religious symbolism throughout. In his novel Molloy, Beckett says: “It was a cargo of nails and timber, on its way to some carpenter I suppose”. And we all know that Jesus Christ was a carpenter by profession and helped his father Joseph before he had undertaken his missionary work.

As a matter of fact, Beckett is never tired of referring to Christ and the salvation of the suffering and penitent man. Suffering is the true badge of honour for a Christian.

“The suffering that characterizes earthly existence”, says Herst Zeifman, “and the theological context of that suffering are recurrent leitmotifs in Beckett’s drama. The casual relationship between divine cruelty and human suffering is perhaps most effectively dramatized in Beckett’s portrayal of many of his characters as emblematic Biblical sufferers.”

If we regard Waiting for Godot as a Morality play, it naturally becomes a religious play as well. The Morality play was a medieval forerunner of our modern novel-with-a purpose, as unconvincingly didactic as instructive. The Morality play may be defined as an attempt to dramatize a Sermon. The characters in such a play are personified qualities, e.g. vices, mental attributes, impulses, moods, states of mind, and the like, or of universalized types set in a framework of allegory. Exactly like the Morality plays, the Theatre of the Absurd, as has been pointed out by Martin Esslin, is concerned with the ultimate realities of the human condition, e. g. life, death, isolation and communication.

Drama owes its origin to religion. So does Absurd Drama, in which man has confrontation with ultimate realities, synonymous with religious reality. In the twentieth century Europe has become a vast and arid waste land, where man is groping in the dark for light. It is an era of nothingness, of nihilism, and negation of traditional values. Religion has been weighed in the balance, and found wanting. Christ is being crucified for umpteen times. Vladimir and Estragon are the representatives of the modern man standing for hope and light. They are not men of flesh and blood but the concrete shapes of abstract qualities.

There is the reference to Salvation, Judgment and Crucifixion like a recurrent refrain. In Waiting for Godot, for example, the first clearly explicit reference to salvation is found in Vladimir’s mention of the two thieves crucified on either side of Christ, one of whom was saved and the other damned. When asked by Estragon what the thief was saved from, Vladimir replied that the man was saved from hell. Vladimir wonders that of the four Evangelists, St. Matthew, St. Mark, St. Luke, and St. John, only one speaks of a thief being saved.

Beckett was fascinated by the idea of salvation, while most people have to suffer damnation. Ever since the dawn of history there have been millions of persons who had to be damned for their misdeeds. Only two thieves got the splendid opportunity of being saved. The Sheep and the Goats or “the Judgment of the Nations” is a pronouncement of Jesus recorded in chapter 25 of Matthew’s Gospel in the New Testament.

While Pozzo tells Vladimir about Lucky: “Remark that I might easily have been in his shoes and he in mine. If chance had not willed it otherwise”, he might be thinking of the thieves. Man cannot be sure of the Grace of God, which is awarded fortuitously. God willed otherwise, and, therefore, Pozzo, so long better placed, had to become blind, at the mercy of others. If Godot is God, he does not bestow favours in a strictly logical manner. For the ways of God are mysterious and inexorable. Take the case of Cain and Abel, who were siblings and brought up in the same environments. Abel was saved and Cain damned.

There are several other references to the fortuitous bestowal of divine grace. Two boys serve as the messengers of Godot- one tends the goats and the other sheep. They are brothers Cain and Abel. But unpredictably Godot is kind to one who tends the goats, and beats the other who tends the sheep. When Estragon thinks that Godot is coming, he cries out in fear: I’m accursed!” Estragon feels that he is in hell. Vladimir, on the other hand, rejoices at what he imagines to be the arrival of Godot.

Salvation as divine grace is matter of chance, and Beckett reiterates the point. When asked to think, Lucky, gives a demonstration of his thinking and mentions several words, namely ‘apathia’ ‘athambia’, and ‘aphasia’. This is not mere rigmarole, and has a philosophical significance, for apathia means divine apathy; athambia means terror of God, and aphasia means the speechlessness of God. That is to say, God may be apathetic; God may be speechless; God has the capacity for terror. God will love and save only a select few.

Tree is the symbol of cross on which Christ was hanged. Few leaves on the tree in second act indicate the idea of hope. They have hoped that their wait will give them some meaningful results.

The Boy, a messenger of Godot conveys the message of Godot’s arrival to Vladimir and Estragon. The boy here is a symbol of hope and better tomorrow.

Vladimir and Estragon are waiting for divine grace. For to wait for Godot is to wait for divine grace and salvation. Vladimir has consistently practiced Christian tolerance and charity and has not left his friend even amidst trying circumstances. Beckett has taken infinite pains to distinguish the two tramps from Pozzo and Lucky. While the tramps have something to wait for, something to look forward to, Pozzo and Lucky are cast adrift with no objective in view. Pozzo particularly suffers from the chastisement of hubris, pride, which is one of the Seven Deadly Sins. He believes that night will never fall upon him. But at the advent of night he becomes blind and plays the penalty of his overweening confidence.