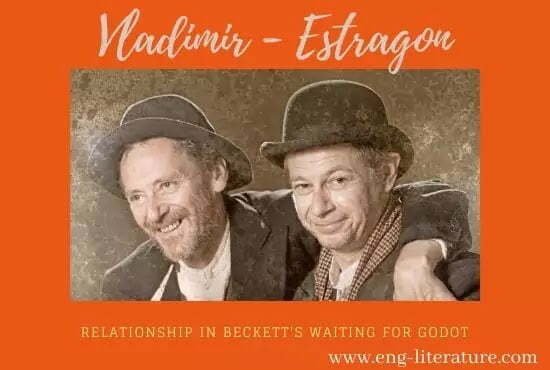 Vladimir and Estragon, the joint protagonists in Beckett’s Waiting for Godot are two tramps, voluntary exiles from all human contacts. A boy appears on the scene and addresses Vladimir as Mr. Albert; Estragon tells the audience that he is Adam. Later Vladimir and Estragon introduce themselves as Didi and Gogo respectively. In an Absurd drama such fantasy and mystification are quite natural.

“Vladimir and Estragon“, says Martin Esslin, “have complementary personalities.” They are the heroes or precisely antiheroes of the play, for unlike the heroes of the Greek or Shakespearean tragedies, they do not command our respect or admiration; at best they evoke our compassion. Yet they had their past.

“In the nineties”,’ says Vladimir, “hand in hand from the top of the Eiffel Tower, among the first. We were respectable in those days. Now it’s too late. They wouldn’t even let us up.”

When told by Vladimir that Estragon should have been a poet, he replies that he was a poet.

But later both of them were on the platform. They have lost their moorings, all local ties, their hearth and home. Their common platform is that they have no grass roots. Now that they have been thrown together and have a common cause, i.e. Waiting for Godot, they are extremely friendly in spite of occasional tiffs and misunderstanding. Estragon is timid and mentally feeble, and needs somebody to look after him. Vladimir becomes his guardian without pontifical solemnity.

Estragon dreams, for by dreaming he can withdraw from the alien and hostile world. His boots constantly pinch him, and he whines like a child. Once he had thrown himself into a river to put an end to his dreary existence, and Vladimir rescued him. He waits for God not so much for spiritual salvation as for some material benefit. Vladimir, however, is serious about salvation. He has only one mental weakness, his hat constantly pricks him. Estragon wants to forget his past as well as the stark reality. Vladimir faces the reality.

Both Vladimir and Estragon have to share the intolerable boredom of waiting. Vladimir is a widely read man. He knows Latin and has read the Old Testament as well as the New with avid care. Estragon does not seem to have read the Bible, and, therefore, does not know that what the four Evangelists have said about the redemption and damnation of the two thieves, crucified by the side of Christ on Mount Calvary. All that he knows of the Bible is from a lonely picture of the Holy Land. “All my life”, he continues, “I’ve compared myself to Christ”.

Here Estragon and Vladimir are on the same footing. They are equally ignorant and helpless, pitted against the inexorable and enigmatic Godot. It is here that Estragon and Godot represent the hopeless and helpless suffering humanity.

The two tramps have lost all sense of time. Waiting is what concerns them. They don’t know if Godot will come today or tomorrow. So they have to kill time. Pozzo philosophies that man has an inevitable passage from the womb to the tomb : “One day we were born, one day we shall die.” Vladimir does not philosophize. He chooses to live in the world of spirit, and asks: “Was I sleeping while others suffered ?”

Knowing full well that “Habit is a great deadner”. Vladimir wants to meet the challenge of time by having recourse to idle talks and harangues playfully abusing each other doing the tree, antics and exercises, playing at Pozzo and Lucky-all traditional pastimes. One activity is followed by another. Then the same activity is repeated. That also becomes dull and monotonous. They, then, stop talking and resort to thinking. They start talking again.

Vladimir suffers unbearable agony arising out of spiritual questionings. His ability to think is also a source of suffering. Hugh Walpole observes : “The world is a comedy to those who think, the world is a tragedy to those who feel.” But Vladimir gives the lie to this statement, and suffers intensely in spite of thinking. He has to suffer for being an intellectual.

Estragon, on the other hand, has a mind that is a clean slate. He does not tax his mind with the memory of the past, of time and date. He does not care to remember of even what happened yesterday: “I’m not a historian”.

Vladimir and Estragon had their past, not an ignoble one. They were then respectable beings, not to be jettisoned from the fashionable society. But cruel life has taken its heavy toll. Both of them are vagrants. This is a bleak picture of regression. Their personalities have suffered disintegration. Himself a miserable man, Estragon has warm praise for Pozzo, the tyrant.

Vladimir, on the other hand, has warm sympathy for Lucky, who is treated like a dog. But both Estragon and Vladimir are inextricably tied to the place, Waiting for Godot. They have no choice, no freedom. It is here they become identified. “Yes, let’s go”, they say at the end of Act 1, and yet they donot move. At the end of Act II, they say, “yes, let’s go”, and yet they donot move. Godot will never come. They\ are in the twilight of their life with nothing to illuminate their souls.

“Come here till I embrace you”.

Estragon in a fit of tantrum replies: “Don’t touch me ! Don’t question me! Don’t speak to me! Stay with me!”

Occasionally there might have been a brief moment of love-hate relationship between the two, but it is love that triumphs. Desolation, doubt, fear and helplessness will persist till the end of their days. But the lamp of love between the two friends may dim, but not die.