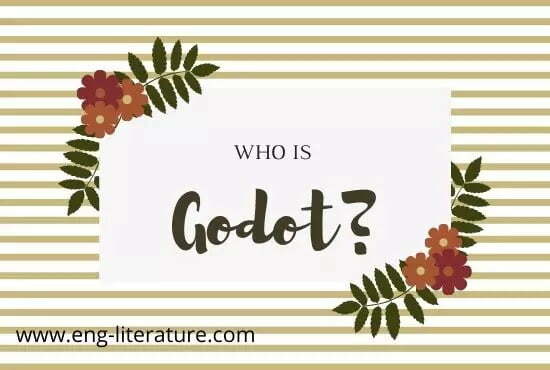 What is the identity of Godot?

The meaning of Waiting for Godot has defied analysis. Critics have spilled ink and failed to arrive at a satisfactory conclusion. “Even those who agreed that Godot had a ‘meaning’,” says Alec Reid, “were deeply divided among themselves as to what that meaning was”.  Two tramps, Vladimir and Estragon, are waiting to meet a men or a divine being known as Godot, who eventually does not turn up. The identity of Godot has posed a question, yet to be answered. According to Ruby Cohn, Godot has been variously identified as God, a diminutive God, Love, Death, Silence, Hope, DeGaulle, a Balzac character, a bicycle racer, and a Paris Street for call girls.

To Alan Schneider, who anxiously asked him about the identity of Godot, Beckett replied: “If I know, I would have said so in the play.” He also remarked, and it is difficult to ascertain if he was serious or flippant, that the spectacular success of Waiting for Godot was due to the misunderstanding. The critics and public alike were seeking to impose an allegorical or symbolic explanation of Godot.

And yet Godot remains an enigma. Others abide our question, and Godot, like Mathew Arnold’s Shakespeare, smiles and smiles, and out tops our knowledge. Had Godot appeared on the stage even for a moment, we could have sized him up. But he does not come. We learn from a messenger boy that he will come on the following day. But he fails to fulfil his appointment.

Furthermore the name ‘Godot’ will entail many possible meanings if it is observed within the context of French. According to Graver, there are some common French words and phrases which begin with ‘god’. Godillot in French for ‘old shapeless boot’; Godasses are ‘military boots’, Godailler is ‘to go pub‐crawling’. Goder means ‘to pucker’. In addition, ‘Godo’ is spoken Irish for God. Thus, as a ‘signifier’, ‘Godot’ potentially will result in many debatable and fractured interpretations.

Right up to the end of the play Godot remains a mysterious figure. If we regard Waiting for Godot as Christian play or a Morality play, Godot may stand for God. Martin Esslin lends unqualifying support to this view. He says that the play is concerned with the ultimate realities of the human condition, for an Absurd Drama is concerned with the fundamental problems of life and death. When man fails to answer the questions relating to ultimate reality, he has to think of God and religion.

If so, Godot is as much the God of the Old Testament as of the New. Jehovah and Godot may look alike, particularly for his white beard. The similarity may also be noticed when we consider that Godot does not love everybody. He has handsome rewards for the boy who tends the goats, while he metes out punishment to the shepherd the award appears arbitrary. That reminds us of Jehovah, who preferred Abel to Cain. The reference to the goats and sheeps is to be found in the Gospel according to St. Matthew :

“And he [Christ] shall seat the sheep on his right hand, but the goats on the left.”

Godot may refer suffering also. “The casual relationship between divine cruelty and human suffering is perhaps most effectively dramatised in Beckett’s portrayal of many of his characters as emblematic Biblical sufferers”. Suffering is divine punishment. Christ himself is the worst sufferer in his mundane existence His death on the Cross, says Hersh Zeifman, is the paradigm of divine rejection. It is for this reason that Estragon says: “All my life I’ve compared myself to Christ.”

With absolutely no ambiguity Beckett refers to salvation and damnation in his play. Vladimir mentions two thieves crucified on either side of Christ, one of whom was saved and the other damped. The two tramps are also thinking in terms of salvation or damnation according to the sweet will of Godot. Much depends on their repentance, which is the way to divine grace. On an inquiry from Vladimir if he has ever read the Bible, Estragon replies:

If we accept this view, Godot may mean God. But Becket has no anthropomorphic conception of God. The very fact that God does not come means that he is disembodied. But just because he does not come, it does not mean that he is non-existent As far as Vladimir is concerned, he very much exists. The idea of salvation is all the while haunting his mind.

When asked by Pozzo to think’, Lucky gives a harangue on Godot. When the gaudy and inane phraseology is left out, he says:

“Given the existence of a personal God with a white beard outside time who from the heights of divine apathia loves us dearly with some exceptions for reasons unknown but time will tell.”

Godot may be termed as “waiting” what really matters. Waiting is charged with expectancy. Everybody waiting for something expects that something better will turn up.

Eric Bentley does not set store by the religious interpretation of Waiting for Godot. He maintains that the name Godot is taken from a play entitled Mercader. Mercadet is a stock Exchange speculator who all the while complains that his financial trouble are largely due to Godeau, who defalcated the money and away.

What according to you does Godot mean? Don’t forget to drop your view in the comment section.