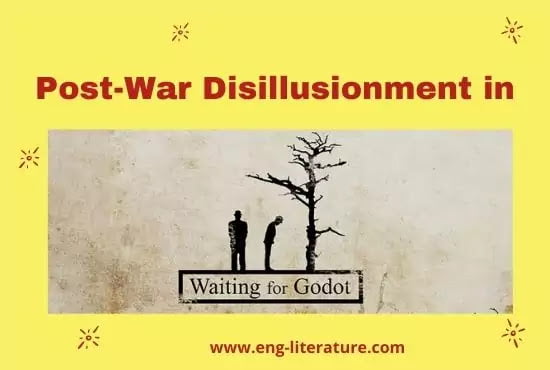 Darko Suvin in his famous critical book on Beckett and Post-World War II theatre entitled To Brecht and Beyond : Sounding in Modern Dramaturgy (1984) tend to identify Samuel Beckett’s position as a dramatist in Waiting for Godot as expressive of the general human condition. The play is based on Albert Camus’ The Myth of Sisyphus (1942). It does not tell a story; it explores a static situation. Martin Esslin in his famous work The Theatre of the Absurd (1961) categorizes the seminal properties of an absurd drama which present lack of plot-construction, lack of characterization, limitation of language, absurdist situation in space and time and man’s waiting for the sake of waiting for a better tomorrow. In a drama dealing with these themes, the dictum is

“Nothing to be done”.

If we look into the four characters treated as pairs we can easily understand the universal phenomenon. Estragon is from France; Vladimir is from Russian; Lucky from English and Pozzo Italian. Four different nationalities are being presented and they comprise with two different groups – Estragon-Vladimir and Lucky-Pozzo. Darko Suvin’s comment on Samuel Beckett can be noted :

“…in his nightmare and horrors of the same presumably identical and relevant for a Vietnamese pageant, a Yugoslav worker, a French intellectualist and an American businessman.”

Our critical response to Suvin’s word would be the specific condition as located in the play is the microcosm of human experience characterized by a plurality – Estragon and Vladimir, Lucky and Pozzo.

The late 1940’s has also witnessed the indescribable situation of the slave; the suppression of the political prisoners. The drama also highlights the binary division between the supremacy of the colonizer and the oppression of the colonised. We also understand that a homogenized human experience cannot be put forward to one universal category. Man in this generation has lost faith in himself. He has seen bloodshed, brutality and murder and he is reduced to the level of non-entity. No bond can attach him with anyone.

The traumatic picture we get in the drama give a negative history of mankind. The historicity of the sense of “being” is reduced to the nothingness; man’s position in the discourse of space and time is absolutely absurd. It is seemingly incomprehensible nightmare of the history where things fall apart. The drama also highlights the theme of empty promise. The stage direction of the Tree alludes to life it remains unrealised even at the end. The characters wait for Godot as a routine habit but Godot never appear physically on the stage. The Boy announces Godot’s arrival, he promises a better tomorrow is never going to be fulfilled. ‘Godot’ also stands for “a better social order” (Keith Whitlock in his book The Varied Scene). The better social order happens to be socialist’s promise which is a far cry, a remote possibility.

Waiting for Godot is a universal condition – the quest for mythological human being. The characters discuss about the ‘ape man’, the physical stage before the human formation. In this drama man’s identity has been challenged, his position in space and time has been questioned. All these ontological questions deal with the central crisis of being nothingness. In the drama Pozzo and Lucky refer to the Atlas, the mythological reference to a man who carries the weight of the heaven. Man’s life is burdensome – the irrationality, cruelty and brutality are in the year. The situation was so horrid that it had a significant impact on the middle class intelligentsia in the post-war Western society. Socialism practises anti-bourgeois socialist framework which stand as a sharp contrast to the feudal colonizer.

As a Post-World War absurd drama, Beckett’s Waiting for Godot is a response to the brutal advance of capitalism, rampant individualism and the consequent loss of community life, large scale devastation of the World-War, loss of man’s internal goodness and liberal traditions and a threat of nuclear holocaust.