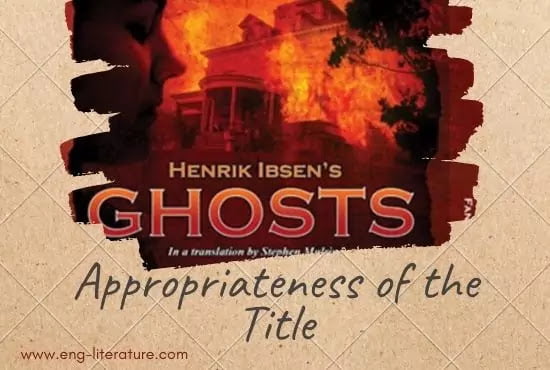 What is the significance of the title of Ibsen’s Ghosts?

Norwegian playwright, Henrick Ibsen’s play Ghosts is ah highly controversial play and the title can be interpreted with multiple layers of meaning. The supreme significance of the title can be attributed to the worn ideals and principles of law and order so misapplied that they have no actual significance. Deception is one of the major themes of this play. Different characters in the story conceal truths and keep secrets from each other, resulting in a long-term effect of lying as the central theme in the plot.

All most all characters are manifested by ghosts that they are unable to control. There are five living characters in Ibsen’s Ghosts. Mrs Alving, a widow, and the play’s protagonist; Osvald, her son; Pastor Manders, her denied love; Regina, the maid and half-sister of Osvald; and Engstrand, Regina’s supposed father. Regina’s true father is Captain Alving. Both Captain Alving and Regina’s mother Johanna are dead, yet both are accountable for the unfolding tragedy. They are instances of the ghosts.

Mrs. Alving, though an emancipated idealist follows some of the instances of superficial morality and social standards. The greatest quintessence is the alleged covering of her spouse’s infidelity through benign acts which are again ghosts of empty social standards. She is well acquainted with the immoral nature of her husband. But instead of courageously facing the truth, she opts to cover her husband’s licentiousness.

The second meaning is applied to those ghosts who are the sins of the past, firmly rooted into the present and haunting the future. An ancient axiom goes like this “Every family has a skeleton in its cupboard”. Thus every family has its own secrets of the past which if unearthed will dishevel the future. The major characters namely Mrs. Alving, Oswald and Regina are subjected to the sins of the past and the ghostly imagery is of the late Mr. Alving.

Oswald is the next recipient who too, is haunted by his father’s past and by the “legacy” his father bestowed upon him. He represents the doomed product of a diseased society. As the old doctor rightly says, “the sins of the father visited the son”, Oswald has become the recipient of genetic syphilis. Due to such grave illness he has become a “living vegetable”, incapacitated and enfeebled. He is forever displayed in a sickly manner unable to live a youthful life. His only joy of life is her paramour Regina who upon learning the truth leaves him to a life of prostitution.

Regina is the last receiver of Captain Alving’s illicit sexual life. She is the daughter born out of the illicit union of the captain and his housemaid Johanna. The housemaid is later married to Engstrand in order to save Alving’s reputation which eternally devastates the legitimate right of Regina as the daughter of the house. She is forced to live a penurious life under a carpenter’s name and become the nurse of her half-brother. The obfuscation of events leads to her unknowingly make her half-brother her lover and ultimately turning to prostitution.

The final interpretation of the title is through the dwindling character of Oswald. Nothing is permanent and thus like Oswald, we ourselves are ghosts, just waiting for our deaths. He knows he is going to die, and waiting for death makes him a lunatic wheedling for euthanasia. He repeatedly pleads in front of his mother to emancipate him so that he can embrace the sun. Thus, the sun is the symbol of inevitable truth which reflects the evanescent nature of life and that we all have to die one day. On the other hand, the sun is also a symbol of hope which Oswald yearns. He is hopeful that in the next life he will truly be blessed like an artist exploring the bounties of God freely and ultimately attaining “the joy of his life”.