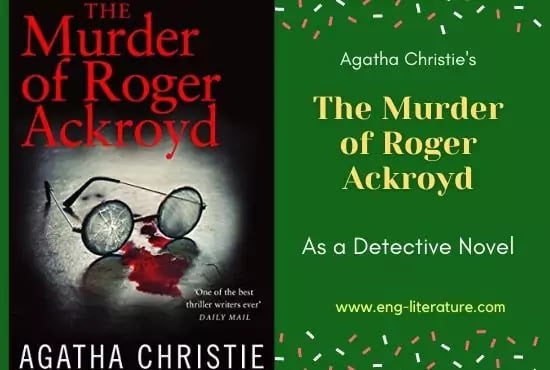 What is detective novel?

A detective novel has traditionally been action centric in that the solution is reached through an unearthing of clues with one motive – finding the criminal. In the process, characters in these novels per se have always been subordinated to the spheres of action within which their performance can be characterised – hero, villain, victim, suspect, innocents. Characters merely move from one sphere of action to another – from a suspect to an innocent for example. In The Murder of Roger Ackroyd, owing to the fact that the criminal is the narrator, it is not the criminal but the workings of the criminal mind that become the focus through the progress of the narrative.

Unlike many other genres, detective fiction is perhaps stricter in terms of its generic parameters. James Gunn for instance, points out how science fiction is a hybrid genre, there can be a science fiction story which is a detective story, a romance, a western, war fiction, historical fiction and so on. Detective fiction, on the other hand, seems to follow certain basic rules. In 1929, Ronald Knox produced his “Ten Commandments for Detective Novelists” for the Detection Club, which had members such as Chesterton and Sayers. Simplified, the rules are as follows:

Christie’s Roger Ackroyd playfully breaks the very first rule for instance, as well as the ninth rule. The structure of the traditional detective novel is like a jigsaw puzzle. The creation of the puzzle begins with the conclusion, the whole is then divided into parts that exist to be rearranged. In The Murder of Roger Ackroyd, the puzzle begins with the murder, and pieces are slowly arranged and rearranged to retrieve the true picture and reveal the mystery of the death of Roger Ackroyd, the solution of the puzzle. Associated with each piece of the puzzle is suspense and with the progress of the narrative an excitement. The underlying factor is fair play, and the reader must have confidence that eventually all the pieces will fall into place or else he will refuse to play the game. The whole process is a pattern that is invoked in each work of detective fiction.

The primary detail that is used in The Murder of Roger Ackroyd like most detective novels is the murder. In most detective novels, the crime is against a person because it engages the fears of the reader. Murder forces society to seek the offender. Murder is also an act of desperation, with the murderer seeking a way out of the mess he has created. The stakes are higher when the game is deadly. In thematic terms, the detective and the criminal become morality figures of good and evil in a modern mileu. One of the ways in which detective fiction connects to the reader is to recreate fundamental belief in the reader’s culture.

Detective novels are based on restructured the superiority of good over evil. These beliefs are necessary for the reader to maintain hope in the goodness of the world. The conflicts outside the little village can hardly be as easily resolved, but by removing King’s Abbott from reality and making it an alternate world where the chaos can be controlled, the novel provides a temporary sense of relief to the reader. A novel like The Murder of Roger Ackroyd creates the illusion of restored order in a chaotic world.

John G. Cawelti, in the structuralist analysis of popular fiction, writes of the game dimension of formula, which is “a culture’s way of simultaneously entertaining itself and of creating an acceptable pattern of temporary escape.” In a work of detective fiction like The Murder of Roger Ackroyd, the patterned experience of excitement and suspense is seen as entertainment while the resolution of conflicts in the fictional world serves as a temporary escape from the frustrations of everyday life.

Cawelti moreover, distinguishes between convention and invention. Conventions are created to give the reader the satisfaction of being a part of the game and familiar with its rules – the stereotyped characters and social backgrounds, accepted ideas and so on. Inventions result in unfamiliar elements of suspense that keep the reader glued to the novel to discover its end. In an otherwise conventional plot, what gives The Murder of Roger Ackroyd its uniqueness is the fact that the criminal is the narrator.

The Murder of Roger Ackroyd thus provides to the reader just what he needs from the formula of detective fiction – a right blend of invention and convention, a plot full of suspense and the sense of ego enhancement that comes as a part of winning the game. The sleepy English village setting also manages to provide the comfort of insular security that the reader expects to find in a work of detective fiction. It is not surprising that this novel remains one of the most read works of detective fiction to date, nearly ninety years after it was originally published.

Hermeneutic gaps in a work of detective fiction are mostly created through red herrings and introduction of unfamiliar new elements that are in no way connected to the central mystery. In The Murder of Roger Ackroyd, the subplot of Ralph Paton, Ursula Bourne, Flora Ackroyd, Major Blunt and several others are created as possibly interesting but unimportant digressions if we are to consider only the central story. But these are also the pivot of the reading process because they help the author create a surprise ending to the narrative. If the reader’s progress through the narrative is driven by epistemophilia, the desire to know the end, then these are essential to lead the reader away from knowing the truth on his own – he must be made to rely on Poirot’s grey cells.

One other fact that separates The Murder of Roger Ackroyd from the action variety of detective novels is that Pirot is in his late seventies in this particular adventure, as Anne Hart, Poirot’s ‘biographer,’ notes in The Life and Times of Hercule Poirot.

Thus much of the action and puzzle solving in The Murder of Roger Ackroyd is psychological. Christie manages to successfully distance her novels from the detective novels that rely more on the investigation of clues. Christie, writing during the World War years also manages the retain that element that structures the pristine detective novel – suspense, while separating it from the genre that the action variety of novels metamorphosed into – the spy thriller.

The Murder of Roger Ackroyd occupies a very distinct place in the history of detective fiction. By challenging the conventions of detective fiction by placing the criminal as narrator, it paved the way for a more self-conscious detective fiction with metafictional qualities, including stylized postmodernist detective and crime narratives such as Paul Auster’s New York Trilogy (1985-1986), Umberto Eco’s The Name of the Rose (1980), and Orhan Pamuk’s My Name is Red (1998) and Jose Saramago’s The Double (2002).