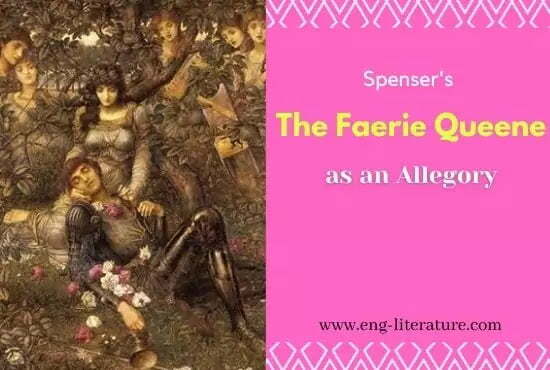 The Faerie Queene as an Allegory

According to Martin Gray in his Dictionary of Literary Terms “the simplest form of allegory consists of a story or situation written in such a way as to have two coherent meaning. Or, allegory is a type of story which carries a second meaning along with its surface meaning.” Spenser’s “The Faerie Queene” is an allegorical romance, symbolizing the moral and spiritual journey of an individual through innumerable temptations of sins towards the ultimate attainment of glory and truth. The poem thus has a serious purpose behind its fanciful characters, settings and events.

All the characters in The Faerie Queene have allegorical significance since they represent abstract ideas and religio-political conflict of the age of its composition. The title character, the Fairy Queen (Gloriana) herself, is meant to represent Queen Elizabeth. The Red Cross knight who is appointed by the Fairy Queen to assist Lady Una in releasing her parents from the prison of Dragon is the embodiment of Holiness, piety, and true religion (Protestantism). Lady Una stands for truth, goodness and wisdom. Her parents symbolize humanity held by Evil represented by the foul Dragon. The mission of Holiness is to champion the cause of Truth and regain the right of human race, held by subjection by the mighty force of Evil.

‘The Faerie Queen’ primarily embodies the religio-political tension prevailing in the two schools of Chi thought in the age of Spenser. For a Christian to be ho must have true faith. So holiness must be founded in truth in order to remain pure and immaculate in the world. As long as Truth and Holiness are united no evildoer can stand holiness.

The plot of Book-l of the Faerie Oueene concerns the attempts of evildoers to separate Red from Una to decrease his strength. Spenser here presented evil in the form of Roman Catholic Church and Portrayed Protestantism/ Anglicanism as true religion. The poet felt that in the English Reformation, the people had defeated false religion (Catholicism) and embraced true religion (Protestantism). So she Knight must defeat villains who mimic the falsehood of the Roman Church

In the course of his mission, Red Cross and Una come across various manifestations of evil. The first encounter is with monster Error. The monster Error allegorically stands for all sorts of mistakes which every individual makes in the course of his life. The flights of the Red Cross Knight with the monster Error symbolizes the conflict between Protestantism and Catholicism. The books and papers Vomited by Error allude to the offensive pamphlets directed against Queen Elizabeth by the Roman Catholics.

Spenser opines that Truth and Holiness must go hand in glove which is the base of a true religion. The Red Cross may be able to defeat these obvious and disgusting errors, but until he is united to the truth he is totally lost and can be easily deceived. This deceit is arranged by Archimago who symbolizes the hypocrisy of papacy. When Truth and Holiness are separated, Hypocrisy gets the chance to mislead Holiness. The separation of Truth form Holiness symbolizes the danger of the English Church against the hypocrisy and plots of the Roman Catholicism.

When Holiness is separated from truth, it pulls a victim to falsehood. Red Cross may become able to defeat the strength of Sansfoy or faithlessness through his own native virtue, but he falls prey to the tricks of Falsehood herself-Duessa. Duessa also represents the Roman church, both she is “false faith” and her rich, purple and gold clothing, which for Spenser, plays the greedy wealth and arrogant pomp of Rome. Historically Duessa stands for Queen Mary who was a Roman Catholic by faith. Having been separated from Truth, the Holiness becomes week and feeble. He cannot withstand the fierce attack of Falsehood and becomes a prey to Duessa. Red becomes a veritable puppet in the hands of Duessa.

In the similar manner, Truth also becomes weak and in protects her virtue she gets aid and succor from Lion which stands for courage. But subsequently the hypocrisy of Archimago makes her an easy victim to San Loy who stands for lawlessness. She is later saved by Sir Stayrane who is a symbol of the Natural force. The implication here is very clear and concrete. Truth cannot be subjected to lawlessness for long. It has a natural force which would assuredly impel it to reassert itself against all hindrance.

The humility, symbolized by the Dwarf, informs Truth about the sufferings of the Holiness. Then Truth goes in search of Gloriana, the Fairy Queen and Holiness is led to the palace of Divine Grace by Truth. There he recovers his former strength and becomes able to fight against the malignant forces of nature. Thus at the end Spenser represents the triumph of Holiness and Truth. They may be separated by various evil doers but ultimately they are united again to bring about the redemption and moral salvation of human race.

Thus in the allegory of “The Faerie Queene“, two worlds, the one that of actual facts and the other that of spiritual and moral conceptions, blend and fuse. Spenser designs an allegory which can be interpreted at two levels – on the historical level, it deals with the religious and political events of Spenser’s time and on moral and spiritual level, it embodies the action and interaction of virtues and vices.