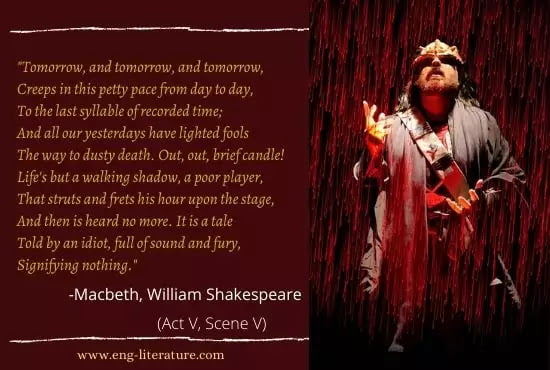 Creeps in this petty pace from day to day,

To the last syllable of recorded time;

And all our yesterdays have lighted fools

The way to dusty death. Out, out, brief candle!

Life’s but a walking shadow, a poor player,

This is the beginning of a famous soliloquy of Macbeth uttered at the fag end of his life (Act  V, Scene V) when he realizes the folly and futility of his action – ambition leads him to destruction. His illusion is vanished. He has gained enlightenment through suffering and anguish of spirit.

These memorable lines are spoken by Macbeth on hearing the news of Lady Macbeth’s death. He says rather relentlessly he should have died hereafter. He now feels more intense and profoud. Not that he is dead to feel; but he now philosophises in the wider perspective of life and death. He thinks on the vanity of human life.

One tomorrow creeps after another tomorrow from day to day in the dullest and monotonous way till the last word is reached in the book of life. We are deluded by the hopes of future – for better tomorrow.

The lines give the picture of tormented Macbeth suffering the torture of his own conscience.

“To the last syllable of recorded time;”

Time is pictured as a book of which the last syllable will be reached when the tale of human existence is over. Time creeps in its petty and slow pace till the last syllable is reached and the book of human life is brought to a finish. A strange mixture of metaphor; from being something regularly moves forward, becomes a lengthy scroll.

“Recorded times”, other interpretations are :

Each tomorrow passes into a yesterday. Each tomorrow comes and goes befooling man, exposing the folly of man’s trust and leading him to the way to the dust.  The pity of human life is that, like a fool, man goes on living from day to day hardly caring to know that each day carries him nearer to death.

“The way to dusty death.”

“Dusty death” is a reference to the biblical passages such as “All go into one place; all are of the dust ; and all turn to dust again.” (Ecclesiastic iii, 20).  Dusty has reference to ‘dust to dust’  of the burial service. Death reduces man to dust from which he has come.

Macbeth meditates on life and thinks that life is a vanity of vanities, pompous and insubstantial pageant. He uses a series of metaphors. He has compared life to a book which is dull and monotonous till the final catastrophe is reached.  The he switches to another metaphor.

Now life is compared to a candle, a flickering spark which burns for short time. Life is light which is put out. Lady Macbeth’s life has been extinguished. Here ‘brief candle’ signifies the transient flame of human life. “The Light shall be dark in the dwelling, and his candle shall be put out with him.” (Book of Job, xxi, 17)

“Life’s but a walking shadow, a poor player,

And then is heard no more”

Life is then compared to ‘walking shadow’, an unsubstantial object which has no importance to eternity.

“Poor player”, the very image is also suggested by shadow. Poor player does not mean a bad actor, but one has to be pitied because his appearance on the stage of life is brief.

It refers to insignificant actor, who for a moment moves about on the stage with pomp, pride and passion showcasing his vain mundane glory for a short period of his part and then is forgotten by all.

Also life is compared to a noisy and buzzing speech of an idiotic lunatic. It is senseless story told by a stupid full of strong words and gestures but wanting in sense – a meaningless verbiage.

Macbeth has realised the futile running after ambitions and endeavours. He has lost the world but gained his soul. The lines mark his redemption. Macbeth suffers a poignant sense of loneliness. He wanted to gain the throne and make himself safe by destroying and defying others. But all his efforts ended in utter frustration. But he does not give away to despair. We are moved by Macbeth’s isolation and loneliness despite his wickedness.