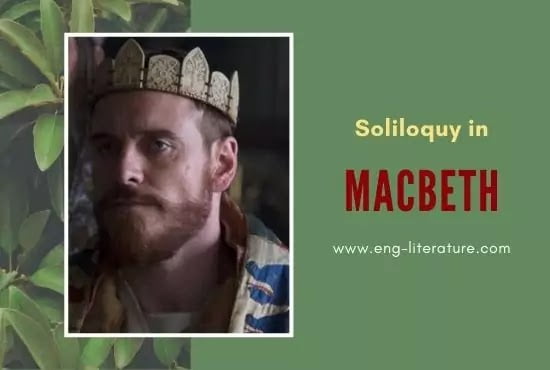 What is the importance of soliloquies in Macbeth?

Soliloquy is a literary device used in drama when a character wants to speak to him or herself. The main purpose of soliloquies is to express the feelings, inner thoughts, personality and mind set of the characters. William Shakespeare, the popular Elizabethan dramatist shows his excellence in using soliloquies in dramas. One of his major tragedies Macbeth is the best example for using effective soliloquies. Shakespeare uses the literary device soliloquy as a tool to exhibit the hero and heroine’s mental state to the audience. There is also a little confusion between a soliloquy and a monologue among the readers. Soliloquy is different from a monologue. A monologue is a speech given by a character in the presence of other characters, whereas, the soliloquy is a speech made by a character in the absence of other characters.

Soliloquies are the heart and soul of Macbeth. The soliloquies of Macbeth are more like interior debates, a fascinating aspect of Macbeth’s motivation. In the very first soliloquy of Macbeth we find him contemplating over the murder of King Duncan and its possible consequences:

“When it is done, then ‘twere well

It were done quickly: If th’ assassination

Could trammel up the consequenees, and catch

With his surcease success……..”

The human psyche is always like a butterfly. It will create more impact on others. In the same way, Lady Macbeth’s poisonous words after reading the letter from Macbeth make a great impact on the play.

“Glamis thou art, and Cawdor; and shalt be

What thou art promised: yet do I fear thy nature;

It is too full o’ the milk of human kindness

To catch the nearest way: thou wouldst be great;

Art not without ambition, but without

The illness should attend it,….”

Even she knows her husband’s desire on the crown. But he does not want it in an evil way. Through this soliloquy, the audience comes to know how ruthless and strong lady she is.

That tend on mortal thoughts, unsex me here,

And fill me from the crown to the toe top-full

…Come to my woman’s breasts,

And take my milk for gall, you murdering ministers,….”

She called the supernatural spirits to unsex her. She is ready to lose her feminine identity to achieve her goal. Fed up with ambition and poisonous words of his wife Macbeth is ready to do the deadly deed with full of fear:

“Is this a dagger which I see before me,

The handle toward my hand?”

Ridden in guilt, Macbeth’s imagination conjures up an impalpable image of a bloody dagger which directs him to Duncan’s sleeping chamber.

However, Lady Macbeth thinks a little water will solve their immediate problem; Macbeth knows that is never too easy to erase the blood spot (act of criminality). He says in a superb soliloquy:

“Will all great Neptunes ocean wash this blood

Clean from my hand? No, this my hand will rather

Making the green one red”.

Just after killing Duncan Macbeth continues to clear his way in the frantic desire for peace of mind enroute evils. Like a true philosopher he now comprehends his present state. Macbeth spinning his dehumanization utters the most poignant soliloquy:

“I have lived long enough. My way of life

Is fall’n into the sere, the yellow leaf…”

After hearing the news of his wife’s death, he responds in low key and bitter. In one of the overly greatest speeches in all of Shakespeare, he accepts the news with a horrifying calm:

“She should have dies hereafter.

creeps in this petty pace from day to day

Life’s but a walking shadow, a poor player

This famous speech acknowledges fully the empty mockery his life has become. He realizes how he is duped by false hopes and illusions. Each tomorrows passes into yesterday by befooling man. He compares life to a candle, a walking shadow, a poor player and a tale told by an idiot to expose the utter futility of human life.

A titanic play like Macbeth would never have been so effective on stage without the magnificent soliloquies. Through them, Shakespeare highlights his mastery over the art of dialogue under the façade of a random chronicle play to entertain the Elizabethans.